There’s no doubt a lot of people invest in a sector by just plopping their dough behind whichever company is the biggest, or the one they’ve heard of most, without actually looking at the fundamentals of that company. This is as much a cemented belief for me as the belief that songs that get played on the radio sell more copies, and that baseball players that get traded to the Yankees for a season or two get paid more over their careers than players who don’t. It’s just science, man.

And I’ll forever believe that 90% of Canopy Growth Corp’s (WEED.T) success is based on one piece of good business from back in the dawn of the legal cannabis industry: they got their license first. Every win since that point has stemmed from that early positioning, even as the company made a litany of bad decisions in the years since.

Canopy Growth Corp, formerly Tweed, got big financings before others, had former Liberal Party players at their core at a time when Liberals were coming to power, and got their licenses while most of their competitors were still changing business from mining. They got the catbird seat and that meant they always got more cash, more press, and more investors – which meant more market cap, and which repeated all of the above opportunities for them, time and again.

Canopy fucked things up royally more than once, such as when they paid $400m for Mettrum days before Mettrum was found to have hidden pesticides in the ceiling tiles, or when they paid $600m for Hiku and Tokyo Smoke – at the time a 3k sq ft growhouse and a chain of lifestyle cafes that, between them, made no money.

But it never mattered, because they had the dough to bale themselves out and the investor base happy enough to excuse anything as long as that market cap kept climbing, and the market cap kept climbing because the investor base kept excusing everything. And so it was that Canopy became an idiot-proof loop of wealth creation. It would repay the faith of investors because more investors kept coming. It would sell a bunch of weed despite universally poor customer reviews because they had plenty more to throw at store shelves. And if a facility was failing, they could just shut it, or bring in all the consultants to fix it, or flip it, because they had 27 more.

If Canopy had started today, it would be called a mess. It would struggle to be worth a bllion, let alone the $7 billion+ it currently sells for. If it wasn’t already the big dog that grampa has heard about a few times on Newsradio 95.3 and steered some RRSP towards, it would be nothing. If it honestly had to live or die on balance sheets and performing assets, it would die.

I know there are plenty of fanboys of Canopy who’ll yell that I’m missing something or that I’m a basher of companies or the dark lord of penny stocks or whatever else they can think up to fill the room with “LALALA I CANT HEAR YOU” instead of addressing very obvious problems, but they’re wrong. 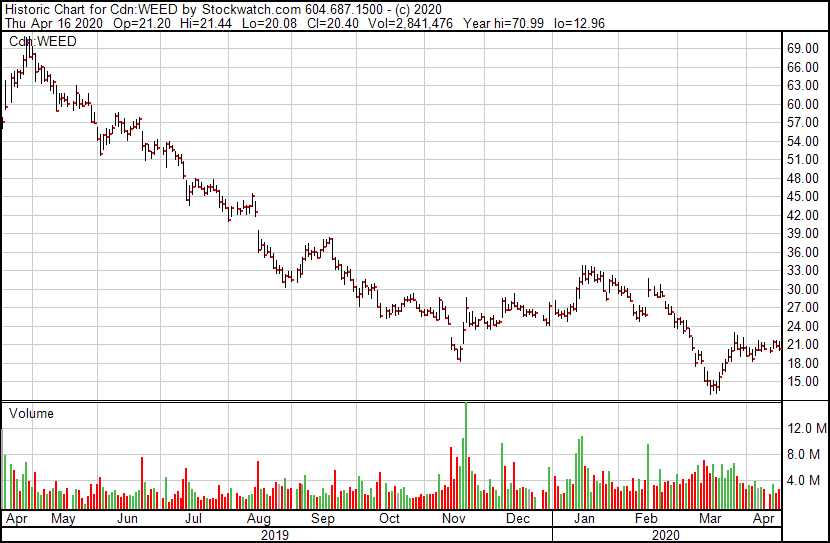 I’ve been writing this story for a few days and the central thesis had been from the start: Canopy is in peril. It needs to set fire to the back field, flood the basement, and detonate some C4 in the living room and hope the insurance policy is paid up. It served a purpose once, as the central cheerleader and comparables target and justifier of absurd valuations in the cannabis industry, but now it’s a cancer on the cannabis landscape, a weight sucking down all around it as those same investors who bought it without thinking because it was the only weed name they recognized, now assume every other company is as absurd and remove their stake from the business entirely.

My take is, Canopy needs to gut itself, and focus on the things that it can do well, that won’t require a massive capital spend to get operational, and that will make money soonish.

Growing in Africa, running hemp operations all over hell’s half acre, having 680 brands that can’t be marketed, owning a vertical in every possible sub sector of the space, and having an office with a receptionist in every country ‘just in case’ legalization comes is absurd over-reach and, let’s be real, mostly a legacy of Bruce Linton’s investment marketing program.

In short, Canopy needs to break up Canopy.

I thought that would be a big call that many would object loudly to, but then, Canopy just laid out my entire argument:

Canopy Growth Corp. said early Thursday it was halting a range of operations across three continents and expects its restructuring plans to result in a charge of up to C$800 million (567.9 million) in the fiscal fourth quarter.

Canopy said it was selling operations in Africa, curtailing cultivation of hemp in the U.S. and Columbia, and shutting down an indoor production facility in Canada. The announcement will result in 85 job cuts, the company said.

Not only was I right, but Canopy management, who aren’t fools (these days) apparently feel the same way.

In the U.S., Canopy said that it had halted operations at a hemp grow site in Springfield, New York because the market was flooded during the 2019 growing season and that it would use the supply to produce cannabidiol, or CBD, products. The company had previously said it would invest between $100 million to $150 million in its New York operations.

If you look over the Canopy Growth investor deck, which the company has helpfully updated this month, the words “From investment phase to a focused execution phase” are repeated often.

This is a company that knows it has major problems and is trying to impress upon responsible investors that it’s worth a shot as new management cleans house.

We are pivoting to become:
❖ A consumer-centric organization
❖ A more focused and disciplined company
❖ A profitable company that can generate positive cash flow
❖ A trusted and credible partner to all stakeholders

You have to like any management team that is prepared to tell you becoming focused and disciplined and profitable and trusted is a ‘pivot’. That’s an unusual display of brutal honesty.

Constellation Brands (STZ.NYSE), the giant alcohol conglomerate, more or less took over Canopy by virtue of investing stupid dollars into it, dollars that initially returned a multiple in value but were quickly sucked through like Mountain Dew through a diabetic kid. They’re clearly determined to salvage their investment, so they kicked the founding CEO, Bruce Linton, out in unceremonious terms last year.

Linton had run the company to become worth a lot of money, but also to lose a lot of money along the way, by buying things that added market cap, but not revenue.

It’s true Canopy has a wide collection of assets in foreign countries, from import licenses in places like Denmark and the UK, to licensed facilities in Colombia and beyond. And I don’t hate Canopy’s Canadian retail store expansion. They were among the first to put out beverages, even if the product is pretty horrible.

And they have cash. And if they needed more, Constellation has more, and grampa and his RRSP would probably give more still.

So why are they on my worst ten list?

Because of this ever so honest line in the investor deck, one slide up from the words “Thank you.”

This is a company that, currently, is priced at 15 x annualized sales despite being down 65% YOY, loses nine-to-ten figure sums quarterly, and the best case scenario is that it doesn’t run an actual profit before 2023, perhaps 2025.

It lost $91 million in adjusted EBITDA last quarter, which was a decided improvement over previous quarters when losses touched as much as a billion, and its adjusted operating income last quarter was -$189 million.

That’s horrible. It’s admittedly been far worse over the last few quarters before that, when billion dollar writedowns have been the norm, but it’s genuinely horrible regardless.

So why would you invest in it now?

But come on now, people, this is a money losing, unfocused, undisciplined mess of a company with so many tendrils in so many places that, even if some sort of core profitable business forms in the rootball, you’re still going to have vape companies in Germany and joint ventures (no pun intended) in Jamaica and a pharmacy education office in Poland and products all over the damn place with a new brand slapped on every damned thing, and none of it working well together, all yanking at the balance sheet.

New management has a herculean task ahead of them fixing all this, but they’re not digging into it because Canopy has so much positivity about it that they had to tear themselves away from selling billions of dollars in vodka, they’re digging in because they’ve committed way too much cash to the cause and need to stop the bleeding, right now.

I believe Canopy management will do that. Indeed, they may be one of the few C-suite groups equipped to do so. I believe they’ll level off the balance sheet, flip some assets, build on the brands that catch a momentary consumer wave, and maybe buy an asset or two where it makes sense. I believe they’ll cut a swathe through underperforming assets and brands, that they’ll find some inefficiencies (lord, how could they not?) and clean up a lot of legacy Linton mess.

But that’s best case scenario and if it doesn’t pay off for three-to-five years – that’s not an investment opportunity right now. If management does everything great for the next four quarters and only improves Canopy as a company, it’ll still be way overvalued based on the actual business it does, and will still be losing money while others have got their shit together.

In short, Canopy has never been a better company than it is right now, and it’s still awful and overvalued and has a lot of downward forces coming if they’re going to write down another $800m in assets next quarter, and who knows how much beyond that point.

FULL DISCLOSURE: Canopy Growth is not commercially connected to Equity.Guru or the author in any way.