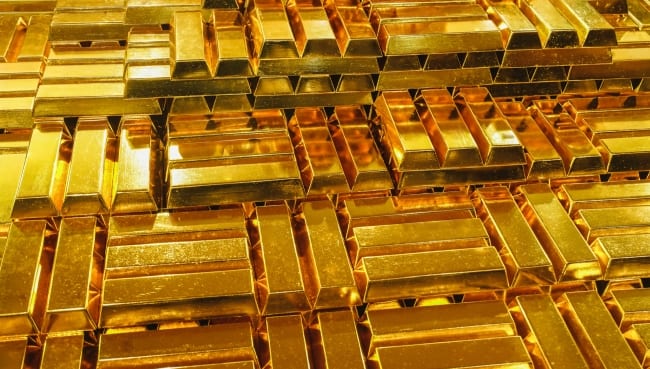 “The 2008 financial crisis was started by a drop in real estate prices, this one is started by the coronavirus,” Peter Schiff told Kitco News last week, “What’s causing the crisis is not the pins, it’s the bubble; it’s the debt. Because we have even more debt now, this is going to usher in an even bigger financial crisis.”

“For years, gold bugs were relegated to the fringes of financial markets,” stated Bloomberg News on April 3, 2020, “Often viewed by mainstream investors as tinfoil-hat conspiracists with basements full of beans and bottled water, their warnings sounded apocalyptic: a coming collapse in financial assets, widespread devaluation of paper money and global disasters that erode civil liberties. Welcome to 2020.”

As the coronavirus brings economies around the world to a standstill, gold is rivaling Treasuries and the dollar as the best-performing major asset this year,” continued Bloomberg, “The metal proved its haven status with a 6% rally as almost $16 trillion was wiped off global stock markets and oil plunged.

Nothing can shake a gold bug’s belief in the intrinsic value of bullion.

In this world of eternal optimism, gold’s recent lackluster performance was due a “liquidity event” – investors selling gold assets to cover losses.  Last week, many gold bugs pointed out that during the 2008 financial crisis, gold fell for about 4 months, along with blue-chip equities – before rallying hard. 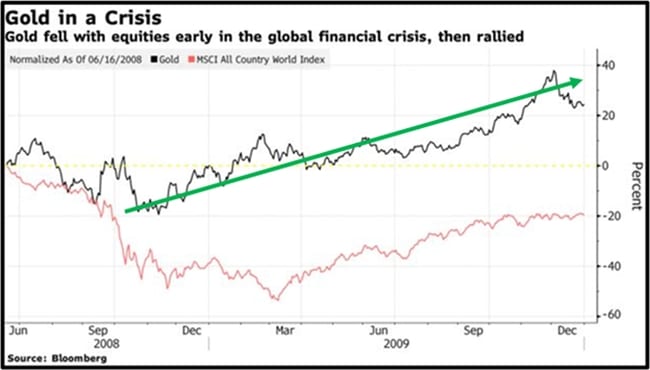 It’s true, the central argument for buying gold (global debt) has never been stronger, as national goverments around the world add trillions of printed money to their balance sheets.

But having a “strengthened central argument” isn’t as satisfying as booking a shit-tonne of profits.

“Despite a setback in valuations, some of the juniors we follow here at Guru Central are pushing ahead, with full market support,” reported Mr. Nolan.

[Editor’s note: the Gold/Silver ratio is at a historical high – silver is expected to move up with gold].

The company now has ample funds to move into production.”

“I spoke with several ExplorerCo execs over the past week,” reported Nolan on his personal website, Highballer Stocks, “Clearly, there is a sense that the tide is turning; that the opportunity is ripe, and now is the time to begin creating shareholder value with the drill bit.

In the meantime, geological models will be updated, drill targets will be prioritized, resource updates and economic studies will be pushed towards fulfillment.

When the activity curbs are lifted, these companies will be ready to hit the ground running.

There are two companies on our shortlist that are currently getting little in the way of love from the market. Cartier is one of them, despite recent positive developments and a treasury stoked to the tune of $6.2M.

Cartier is developing its Chimo Mine Project where a phase 3 drilling campaign is opening up the project’s resource potential at depth.

The company also boasts a robust project pipeline. We’ll hear more about these projects in due course.

A common theme affecting many companies operating in Canada applies here too: all drilling activities are temporarily suspended at Chimo until virus infections flatline.

The March 26 news stated that work continues on the Chimo project as follows:

Cartier deserves better than it’s getting from the market. As the uptrend in gold continues to assert itself over the coming weeks and months, these shares should respond accordingly. And like the vast majority of the companies featured in these pages, Cartier has endgame potential.

Robertson is a joint venture between Barrick (61.5%) and Newmont-Goldcorp (38.5%). This JV among mining behemoths is called Nevada Gold Mines—NGM for short.

The following map shows Pipeline, Cortez Hills and Goldrush (three of the largest Carlin-type gold deposits on the planet) and their on-trend proximity to Robertson.

Coral is in a sweet spot with this NSR. This royalty goes beyond the 2.7 million ounces defined in the current resource—it covers the depth potential of these subsurface layers. The geological setting at Robertson is ripe for another Meikle-style deposit at depth (from 2007 to 2016, the Meikle underground mine produced over 4 million ounces of Au at an average grade of .295 oz/ton).

As mentioned in a previous offering, Coral’s share price was nearly cut in half during the March 16 liquidity event. It has since stabilized in a familiar $0.45 trading range.

Earlier this month, the company provided an update on NGM’s progress at Robertson:

Progress is being made at Robertson—the company maintains a strong cash position and a super-tight cap structure while the deposit gets pushed further along the development curve.

As noted in my maiden HighGold article, and not to diminish the geological prospectivity of their Timmins assets, the company’s Johnson Tract property in southcentral Alaska is where the real excitement lies.

Johnson Tract was discovered by Anaconda back in 1982.

Those are some crazy high-grade values. And it’s not often you find high-grade gold AND base metals together in the same deposit.

Equally compelling is the fact that this project has been hidden from the market for decades. No exploration—zip, zero, nada—has been conducted on the property in over 25 years.

Grades and widths this fat are not easy to come by nowadays. It’s the main reason we’re here.

As reported in a recent offering, HighGold suspended its drilling activities in the Timmins camp after drilling 12 drill holes for 2,524 meters of a planned 5,000-meter program.

Worth watching, CEO Darwin Green delivered the following presentation at the Metals Investor Forum one month back. Green does a good job of summarizing the tremendous latent potential of the Johnson Tract project. The following link will take you there.

White Gold is the other ExplorerCo on our shortlist that deserves love but isn’t getting any from Mr. Market.

The VG Zone, located across the river from these two deposits, holds some 230,000 ounces in the Inferred category.

A resource update for the Golden Saddle and Arc deposits is on deck and could drop at any time.

White Gold hasn’t produced news in recent weeks, but its share performance is worth commenting on.

White Gold is an anomaly. It would appear to have it all: highly competent management, a district scale portfolio of Yukon properties with considerable resource and discovery upside, a fairly tight share structure, and the potential for strong newsflow as the 2020 field season draws near.

The Yukon appears to be faring rather well with only five confirmed COVID-19 cases. That could bode well for the upcoming field season.

The company’s shares have recovered from their March 16 crash low of $0.41, but deserve better than the lowly range they’re currently stuck in”.

End of Mr. Nolan’s Highballer Stocks’ round up.

As in the 2008 crisis, prices have fallen during days of acute stress in the broader market as investors faced margin calls and sold liquid assets to raise cash. Still, the declines have been largely short-lived.

“Before this is over, gold is going to go up a lot,” commodity investor Jim Rogers said by phone from Singapore. “Whenever people lose confidence in money and in governments, they always buy gold and silver.”

Full Disclosure: Equity Guru has no commercial relationship with the companies mentioned in this article.