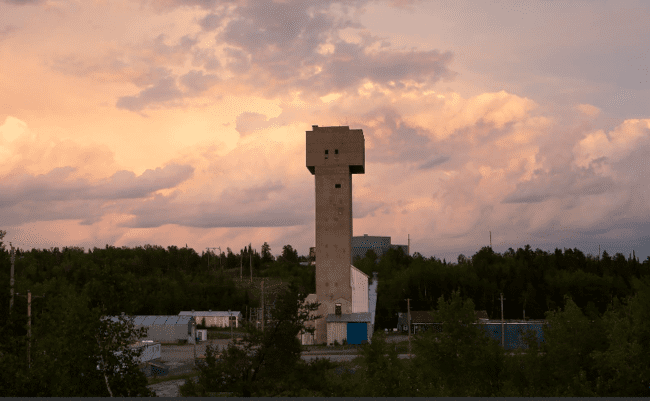 Pure Gold is a development and exploration story out of the High-Grade Gold Capital of the World—the Red Lake Mining Camp of northwestern Ontario. The company’s Madsen deposit, aka the PureGold Mine, is considered the highest grade development-stage project in Canada.

Just over a year ago, the company tabled a positive feasibility study (FS) based on a portion of the above resource block—3.5 Mt at 9.0 g/t containing 1.0 million ounces. These reserves serve as the foundation for a host of robust economics over a 12-year mine life (FS details further down the page).

Other considerations: the price of oil has crashed in recent weeks. Since energy is a big cost driver for a miner, lower oil prices mean lower operational expenditures (OPEX). Also, gold priced in Canadian dollars is near an all-time historic high—trading at roughly $2,300 as I type.

Equally important, the company has a good relationship with the local Wabauskang and Lac Seul First Nation, where a Project Agreement was signed and implemented last summer. This lays the foundation for a seamless transition, from explorer to mine builder.

On August 7, 2019, the company dropped the following piece of news:

They have the funds they need. The mine is under construction. The first gold pour is expected before the year is out.

The timing of this high-grade mine couldn’t be better—gold’s underlying fundamentals are extremely compelling.

“And we’re only just getting started“.

Main Street – where the gold is

If you’re in Red Lake, you want to be on Main Street, on the Balmer Assemblage (green areas highlighted below), specifically, along the deep crustal breaks (where green meets yellow). These are the conduits that concentrate gold mineralization in the Red Lake camp. 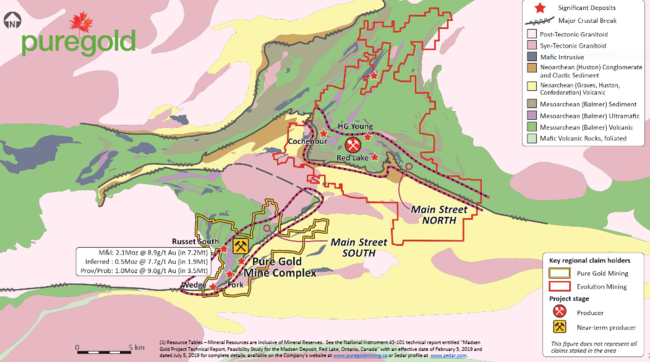 The map below shows a cross-section of the subsurface layers running through Main Street—Pure Gold’s Madsen mine is on the left, Newmont-Goldcorp’s mine(s) on the right. 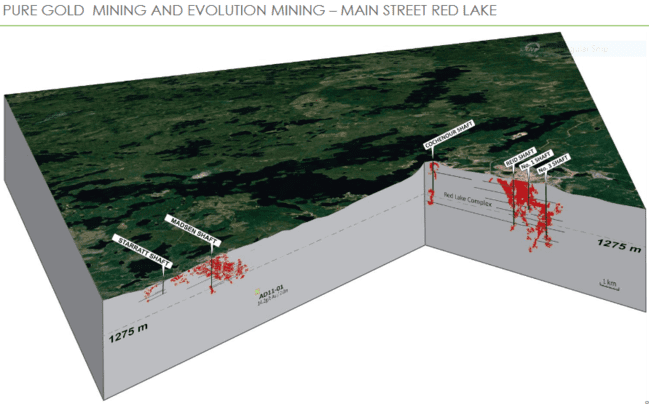 Viewing Newmont-Goldcorp’s deposits as an analog, the company uses this image to demonstrate the depth potential on their side of Main Street.

Newmont-Goldcorp has mined down to a depth of 2.5 kilometers. Pure Gold’s current reserves bottom out at 1.2 kilometers. Both projects share the same rocks—the same structure, the same geological timing. It’s possible Pure Gold really is “only just getting started.”

You may or may not know that the No. 3 shaft (extreme right, above map) was the ‘High-Grade’ zone that gave rise to the multi-billion dollar mining behemoth once known as Goldcorp (now Newmont-Goldcorp). Roughly 6 million high-grade ounces were mined out of that one zone alone.

The company has a good feel for the region’s subsurface layers having delineated a pronounced, elongated +7 kilometer southwest-northeast mineralized trend. This bit of geological sleuthing led to the discovery of additional near-surface zones—Russet South, Fork, and Wedge—all of which are part of one semi-continuous coherent gold system.

Note the (fat) drill intercepts along the various zones highlighted below. 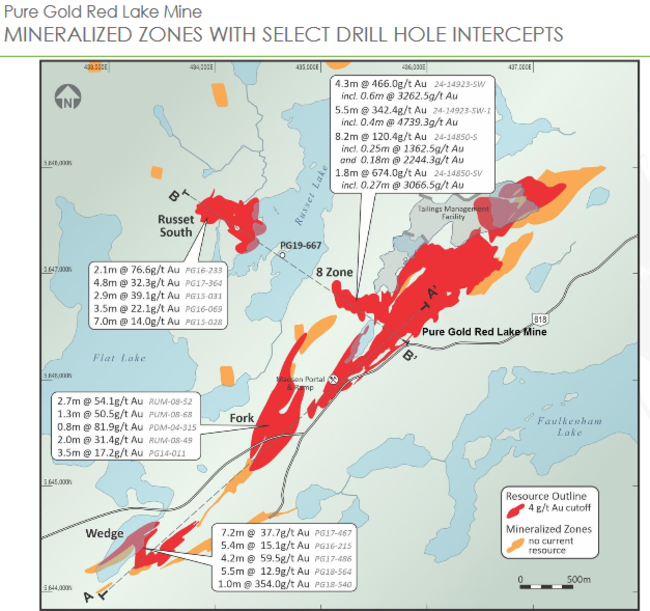 Russet South, Fork, and Wedge represent the next phase of development for the company. With an additional 210k ounces of high-grade material, these new zones could extend the mine life another 3.7 years.

The economics underpinning these new discoveries demonstrate the potential to add approximately $51 million to the project’s after-tax NPV.

Getting back to the depth potential at Madsen, the following presentation, featuring Pure Gold CEO Darin Labrenz, examines the possibility of mineralization extending below the limits of the current reserve base at 1.2 kilometers depth (fast forward to the 5:50 mark if you’re anxious and wanna cut to the chase):

“We see potential here for the next three to five million ounces sitting right below the bottom of the reserve“.

Based on recent success with the drill bit, the company dropped the following headline a few months back:

Eric Sprott, Rob McEwen, Anglogold Ashanti, and Newmont-Goldcorp own >30% of Pure Gold’s outstanding shares. Management and directors own 4%. Institutions own another 16%.

The Pure Gold team, with an enviable track record of creating shareholder value, is simply top-shelf.

Re the COVID-19 situation, on March 20 the company stated:

“Development activities at the Pure Gold Red Lake Mine continue to operate normally, with no significant impact to date beyond the implementation of additional education and safety measures.”

Pure Gold’s soon-to-be-producing mine, and 47 square kilometers of highly prospective terra firma, make this a compelling shortlist candidate. This one has endgame potential.

Scrolled out across the top of the company’s project overview page, referring to the Madsen Red Lake Mine and Starratt-Olsen Mine (two past producers on the property), the following:

Turns out, when they abandoned these mines, they’d barely scratched the surface. (They left the real prize behind).