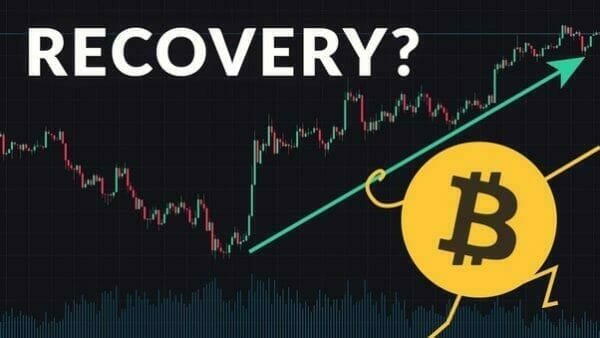 Bitcoin’s recovery is a study in the coronavirus, fear and reactionary swings (Crosspost)

Bitcoin’s volatility is hard to gauge. Minor spikes and dips happen all the time, and what cryptocurrency enthusiasts consider to be minor are catastrophic and atmospheric bounces to traditional stocks and bonds. But when the shit hits the fan it really distributes the proceeds widely, as we saw earlier this month as the effects of the coronavirus caused a monumental dive in Bitcoin’s fortunes. Since then, though, it’s been in recovery. First in drips and drabs, and then occasionally in large 10% bounces and finally to where we are today, with Bitcoin’s price resting at roughly between $9,000 and $9,500, which is up from its lowest point three weeks ago at $6,773.20.

If you bought in at the bottom, congrats. Hodl strong, there’s more recovery to come.

But what caused it? It’s hard to tell. The ecosystem is widespread and built on the backs of a number of different causal factors, each of which could be responsible for minor shifts in Bitcoin’s fortunes, but when put together usually spell delight or calamity.

Miner capitulation is the technical term for what happens when the hashrate, or the difficulty in kilowatt hours in closing the block, is no longer worth the amount of reward in bitcoin price for closing said block. If the marginal cost in electricity exceeds the marginal benefit from mining, then economics 101 says you shut down production. A few companies have collapsed overseas and in North America because of the decreased bitcoin production, but that’s more of a consequence of the drop, which of course, facilitated an even deeper drop.

In order to find the parent cause, we need to look at China.

China is responsible for two thirds, or 66% of the world’s bitcoin production. That’s right. Most of the miners of your digital gold are from China, with all of their coal-fed, environment destroying ASIC-rigs.

They were forced to stop courtesy of the Chinese government crackdown on the coronavirus. The government emptied the streets in typical Chinese jackbooted fashion, nailing doors closed to keep people inside. Chinese crypto-auxillary support company Bitmain couldn’t deliver new antminers and existing miners couldn’t get to work anyway, because you can’t mine bitcoin from your living room anymore.

The price of Bitcoin (and the altcoins) dropped because as China goes, so goes cryptocurrency.

Subsequently, bitcoin’s market recovery was signalled by the Chinese government’s easing of the quarantine, which allowed Bitcoin miners and the companies that support them to get back to work.

That’s the problem with decentralization in a nutshell, though. If you focus most of the bitcoin mining activity in one country, then the coin will take a hit when and if that country does.

That’s changing, although not fast enough.

Whether it be through market saturation or the pursuit of a better regulatory climate, certain Chinese crypto-mining companies and the companies that support them are looking to the west for more options. Barring a complete Chinese crackdown, the movement will remain more of a runoff than a mass-exodus, but when it comes to violent overreactions you can never quite count the Chinese out.

No need to fear

That’s only one facet of the recovery. Then of course there’s the FED and FDIC.

We have to remember Bitcoin’s history for this one. It was invented in 2008 as a response to government overreach, greed and general human stupidity. The government rolled out quantitative easing to bail out financially and morally bankrupt banks after they stabbed unwitting mortgage recipients in the neck with predatory subprime loans, and it was clear to anyone paying attention that our elected officials weren’t trustworthy enough to be in charge of a tricycle let alone the economy.

But we have short memories.

Besides, the circumstances are different now. One of the best and only justifications for having a credit card are for emergencies. Your car breaks down on the side of the road? Get your VISA out and take care of that shit. Your kid needs emergency surgery and you have the grand misfortune of being born American? Might want to get your Mastercard to handle what your Visa can’t and sort it out later. As far as emergencies go—the coronavirus counts. A working economy requires people to be out there making and spending money, and most of us can’t work when the prospect of doing our jobs involves being in close proximity to other people, who may or may not make us sick and die.

But this could have been worded better.

The Federal Reserve says there is an
“INFINITE AMOUNT OF CASH”

This
is quite literally the reason bitcoin was created. pic.twitter.com/JTE9TVoSr0

The prospect of infinite cash is inherently terrifying to hardcore Bitcoiners, and frankly, makes folks who are just weekend enthusiasts a little uneasy as well. When the fed starts talking about printing money, cryptocurrency enthusiasts start thinking about preserving the value of their holdings, and to do that means putting it where the government can’t touch it.

And that’s one of the reason’s for Bitcoin’s recovery. 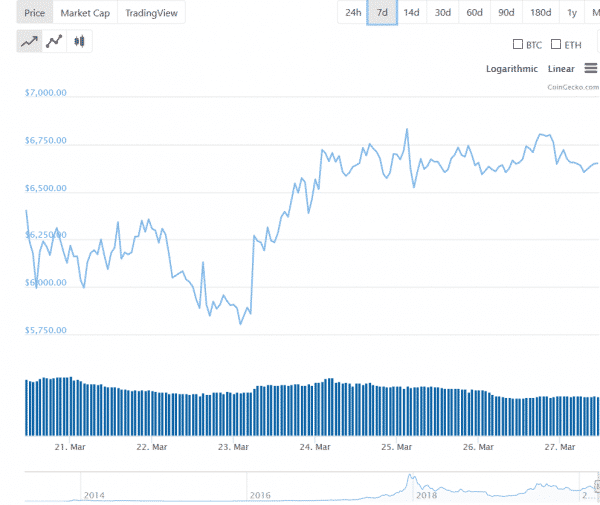 But bitcoin’s mostly only for institutional investors and the occasional weekend warrior now. Hardline crypto-enthusiasts understand that Bitcoin’s high visibility makes it traceable, and therefore vulnerable. They instead start looking at altcoins that make it harder for government officials to cripple their holdings.

Their recovery is much more interesting. Look at that spike on the far right of the chart. 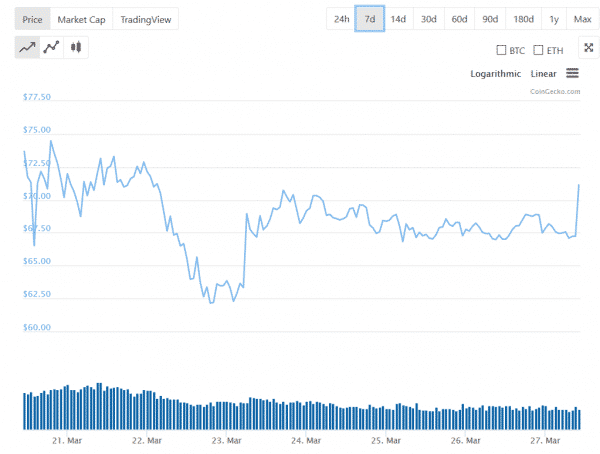 And especially Monero, which hasn’t been too overly effected by the coronavirus anyway. 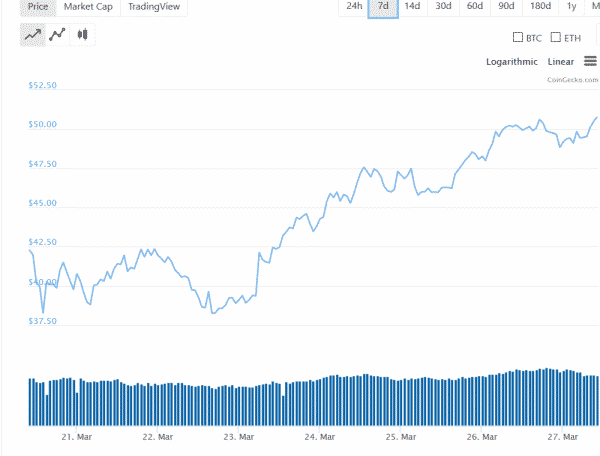 The effect is likely compounded by the FDIC’s advice for Americans not to withdraw all their money from banks to safeguard against market volatility in the stock market caused by the pandemic. For plenty of Americans, already largely distrustful of their government, that’s a signal to do just that.

Yesterday, US Federal Reserve Chairman Jerome Powell said the US might already be in a recession. But FDIC chair Jelena McWilliams message reassures Americans that their money is safe at the banks. “The last thing you should be doing is pulling your money out of the banks now, thinking that it’s going to be safe for someplace else,” she said.

Forget the mattress! Keeping large sums of cash at home is risky. The best place to protect your money is in an FDIC-insured bank where it’s safe and sound. Learn how the FDIC safeguards your #money at https://t.co/O2cb1bTUJs pic.twitter.com/R8pFVxBPrM

She’s not wrong, but does she seem nervous to you?

It’s not like we’re all exactly keeping our cash in our mattresses anymore, either.