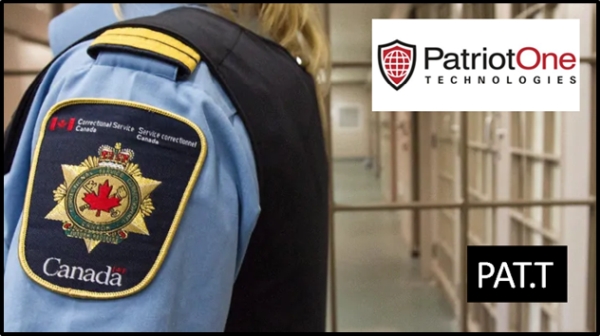 On March 9, 2020 Patriot One (PAT.T) announced that it has been awarded a contract for the PATSCAN Multi-Sensor Covert Threat Detection Platform by Innovation Solutions Canada (ISC) for Correctional Service Canada (CSC).

ISC is a Canadian government award program that allows innovators to keep control of the intellectual property, get their innovation tested in real-life settings and help advance products to market faster. 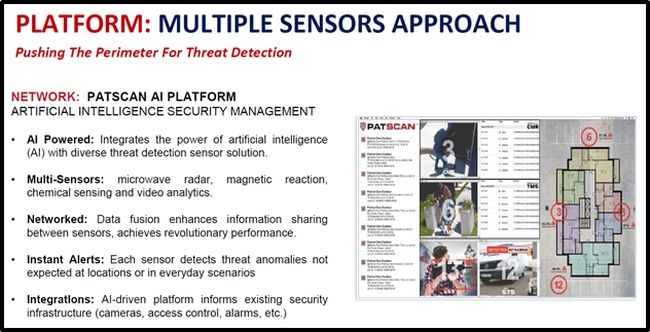 This is the second ISC announcement in the last six weeks.

On January 30, 2020 PAT announced that it has been awarded a $780,000 contract by ISC for the Canadian Department of National Defense (DND).

The ISC contract announced March 9, 2020 will include a video fight and disturbance detection module.

When we first began writing about Patriot One on November 22, 2016, we talked about the “NForce CMR1000 innovative, radar technology that autonomously recognizes signature identification patterns of prohibited items such as guns or knives.”

Since then, Patriot One’s technology suite has expanded radically in scope and sophistication.  Artificial intelligence (A.I.) has opened up new doorways and new potential revenue streams.

Technical details of the “fight and disturbance detection module” are still to come but multinational teams have been working on using A.I. to detect fisticuffs.

“UK and Indian researchers demonstrated a drone surveillance system that can automatically detect small groups of people fighting each other,” reported Spectrum, “Researchers enlisted 25 interns to mimic violent actions in five categories such as punching, kicking, strangling, stabbing and shooting”.

Incidents of inmates fighting in Canadian prisons has been on the rise for the last 15 years.

“Inmate Dwayne Wright, watching television with his feet up, was suddenly sucker-punched from behind by another inmate,” reported the Huffington Post in 2016, “A video of the attack shows him falling to the floor.”

Inmate assaults in federal prisons grew 93% from 2006 to 2015, according Correctional Services Canada data.

In 2019, assaults against staff in BC’s prisons reached an all-time high, with as many as 120 attacks on guards across the province.

“These are not minor assaults. These are very violent assaults,” stated Dean Purdy of the BCGEU, “We think it’s only a matter of time before someone’s killed on the job.”

PATSCAN’s Video Object Recognition Software (VRS) focuses on the detection of visible make-shift knives, cellphones, as well as disturbances and fights, all of which have been issues at correction facilities.

“We are excited to help correctional facility management and guards quickly detect fights and disturbances that at times breakout between inmates,” stated Dr. James Stewart, SVP Video Analytics at Patriot One.

Ironically, fears about fighting in high-schools have been eclipsed by fears about students bringing guns to school.

“When students in Mt. Healthy, Ohio walk through the front door of the junior/senior high school, signs are posted that make it clear cameras are keeping an eye on them,” reported WLWTR News, “Senior students confirmed that some classmates “carry weapons on campus, even though they know they shouldn’t”

“In Videos provided by Patriot One Technologies, the company behind the PatScan system, show how barely noticeable sensors can locate a gun and alert a school’s security team,” reported WLWTR.

The PATSCAN will be installed just a few months after Mt. Healthy police filed charges against students for having a loaded gun, bringing bullets to school, threatening to shoot someone and leaving ammunition in a restroom.

Officials at the Ohio high-school learned of the PATSCAN system after the Cincinnati Reds announced they’re installing it at Great American Ball Park.

Correctional Service Canada will deploy the PATSCAN Platform in March 2020 at an undisclosed location.