Those of us who are married know that the most dramatic conflicts are often catalyzed by small disturbances to the status quo.

You made an omelet and left egg on the Spatula.

You left a cigarette butt in the potted bamboo.

The ensuring 15-minute screaming match may be about the spatula, the toilet paper, or the cigarette butt – but the underlying cause is usually deeper.

Calling the coronavirus “egg-on-a-spatula” is pushing it (2,800 people have died) but the extent of the market carnage can not be solely explained by its current or likely-future economic impact.

As you see from the chart below, the last five days, blue-chip investors have been losing sleep: 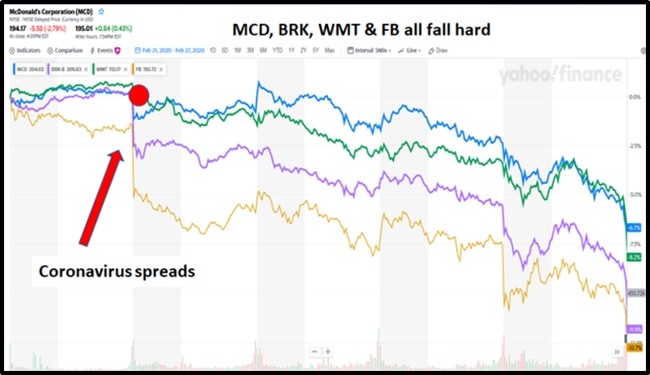 Here’s the thing: the marriage between investors and stock markets was already under stress.

The recent blood-bath in blue-chip stocks was catalysed by the spread of the coronavirus, but there are 5 underlying causes that have made it so dramatic and violent.

“Consumer debt in the U.S. is now $1.3 trillion higher than the previous peak set in 2008,” stated CNN business, “Household debt has climbed 25% from the post-recession low of $12.7 trillion.”

Even if no new debt is accrued, 16 million of those indebted Americans are projected to die before they pay off the principal.

The U.S. unemployment rate is near a 50-year low, however after 10 years of economic recovery, the labor force participation rate is just 63% as of January, 2020.

If you stop looking for work, if you are a professional drug dealer, if you’re in prison – you don’t count as unemployed.

Many of those who have left are not baby boomers, but prime working-age Americans (age 25-54) in their peak earning years.

Nearly 37% of all potential workers have opted out of the employment market.

How can this be?

Because “workers” are yesterday.

That’s about 27 X fewer people than GM employed in 1956. “These days, the number of employees is less important as automation and sophisticated programs take over,” confirms Forbes Magazine.

These tech giants incur fewer costs in comparison to those in the auto industry. Facebook spends virtually no money on raw materials or keeping inventory.

When 37% of your eligible workers aren’t drawing a pay check, that creates an economic stress point

Anxiety about the U.S. presidential election’s outcome is creating jitters in the markets.

Financial pundits believe that if Sen. Bernie Sanders, an independent from Vermont who characterizes himself as a democratic socialist, wins the Democratic presidential nomination, and possibly even the presidency, stocks would take a hit as he an antibusiness candidate.

“The risk to U.S. stocks is pretty significant if Bernie gets the nomination,” confirmed Ed Moya, a senior market analyst with OANDA.

“If we are going to break the stranglehold of corporate interests over needs of the American people, we have got to confront a Washington culture that has let this go on for far too long,” stated Sanders.

Bernie could easily cool investor fears by saying, “I’m not against rich people.  When I’m President, people will get even richer.  But rich people will need to pay their share.”

But that’s not Bernie’s style.

The possibility of a socialist in the White House is a destabilizing market force.

Shopping in the U.S. generates a whopping 68% of its GDP. There are more shopping malls in the U.S. than high schools.

By comparison, Chinese shopping skills are abysmal. Shopping in China accounts for only 54% of China’s GDP.

The Chinese don’t get it!  They buy boring shit like groceries, furniture and fridges.

That means that U.S. consumers will have to buy less stuff, or borrow more money.

When the one thing you are best at is spending money you don’t have, that’s a ticking time-bomb.

$1.2 trillion worth of corporate junk bond debt will mature in the next few years, leaving investors in a world of pain, as many of the bleeding corporations will be unable to repay the principle.

“The biggest boom in corporate credit since the Great Recession in 2008 has led to warnings from regulators that a bubble in business debt could end badly,” stated Market Watch.

Moody’s now has a “negative” outlook on nine industries where junk-rated companies have a collective $223 billion of debt maturing by the end of 2024.

In 2019, a lot of optimistic investors piling into corporate junk bonds.

“I’m bursting with pride – I just bought a brand-new Ford Fiesta!” – said Nobody Ever.

A Congressional Budget Office study found that a coronavirus pandemic “could produce a short-run impact on the worldwide economy similar in depth and duration to that of an average postwar recession in the United States.”

A lot of that borrowed money has sloshed into the stock markets.

The S&P 500 is trading at 19 X the forward earnings estimate among analysts. That is up from 16 X a year ago. Aside from a brief spike in 2018, it is the highest forward price-to-earnings ratio since 2002.

(Resentments, lies, inequities that we don’t have the courage to speak about directly)