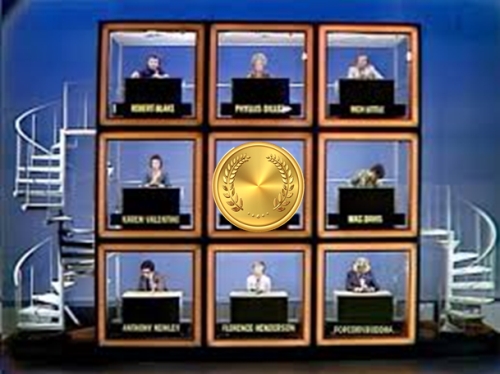 “Gold does not perform well when the economy runs smoothly and risk-aversion is very low,” states Sunshine Profits, “but it shines during economic turmoil.”

“Gold is a way of going long on fear,” stated Warren Buffet.

This week, as the coronavirus spreads across the planet, infecting 82,000 people and killing 2,800 – global stock markets have experienced extreme “turmoil” and “fear”.

According to Sunshine Profits and Buffet – and 4 million financial pundits – when markets collapse and shit hits the fan, gold prices are supposed to surge.

Neither of those things happened.

After of brief spasm of giddiness, the GDXJ slogged downhill for the last two days – bleeding almost as badly as the DJIA.

To illustrate this maddening counter-intuitive convergence, we will create a chart showing the Fibonacci lines, using the common retracement values of 23.6%, 38.2% and 61.8%.

Editor’s Note: after a torturous speed-typing session on his 1988 Texas Instrument Calculator, the writer decided that some strategically placed emoticons will suffice. 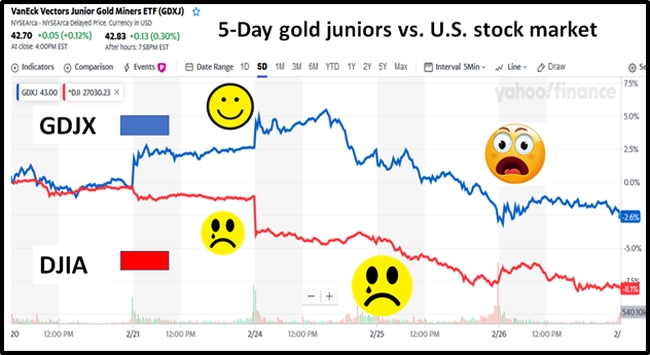 In the last 48-hours gold bugs have experienced Elisabeth Kübler-Ross’ 5 stages are grief.

Denial – “My computer is broken – the gold charts are upside down”.
Anger – ”I hate you gold”
Bargaining –“If gold goes to $2,000/ounce, I promise to drink less.”
Depression –”Born alone, struggle, decay, die alone, ”
Acceptance – “A study in Sweden suggested poor people are happier”.

Of course, we can always find reasons to explain things that displease us.

Aren’t the Chinese the most aggressive buyers of physical gold?

How can they purchase coins, jewelry and gold bars when, like my wife, they are on lock-down, trapped inside their homes?

“It appears the bearish aspect of reduced consumer demand for the precious metals amid the potential for a slowdown in global economic growth is presently trumping the safe-haven demand aspects of the coronavirus scare,” stated Jim Wyckoff, senior analyst at Kitco.com. “China, which is hit hardest by the outbreak, is a world leader for consumer gold demand.”

“There is some downside correction in gold despite the risk-off trading mood,” observed a strategist at Swissquote Bank, “The price of an ounce eased to $1625 [on Tuesday], after Monday’s advance to $1691.”

Analysts have tied the retreat by gold in part to positioning, noting that data had shown extremely high net long speculative positions in gold futures. Still, the degree of the pullback in light of the continued selloff in equities was widely described as a surprise.

“Surprise” is a euphemism for what most gold bugs are feeling.

Gold had an opportunity to save us against a tsunami of wealth-destruction in the global stock markets.

We offered you a “Hero Role” in re-make of “The Apocalypse Now” – but instead you accepted a gig on Hollywood Squares.

Who is your agent?

Now your income is reduced and your reputation is permanently soiled.

“Bullion should continue to find more support from accommodative monetary policy worldwide, a rapidly shrinking pool of risk-free assets, and lower beta of traditional risk-off currencies even without triggering worst-case pandemic fears,” opined a market analyst at AxiCorp on Tuesday.

“Accommodative money policy” as a catalyst for gold prices?

Are we back to that already?

True enough, if you’ve ever tried living off your credit cards, you know that “borrowing more money” to buy shit you can’t afford, is train-wreck in the making.

When the confidence in fiat currency finally implodes, so the story goes, there will be a stampede to gold.  Legendary mining investor Frank Giustra talks about it here.

Check out Greg Nolan’s article below for information on gold juniors.

Like a charismatic wayward child, gold may disappoint, it may teach us bitter lessons, but gold bugs can’t stop believing in it.

Even though an expanding viral plague + imploding global stock markets did not inspire it to adopt the role of a hero.

Full Disclosure: Throughout this article the writer has used anthropomorphic terms to describe gold’s price action; gold “tried” “wants” “declined to” etc.  This is really sad. The writer apologizes.