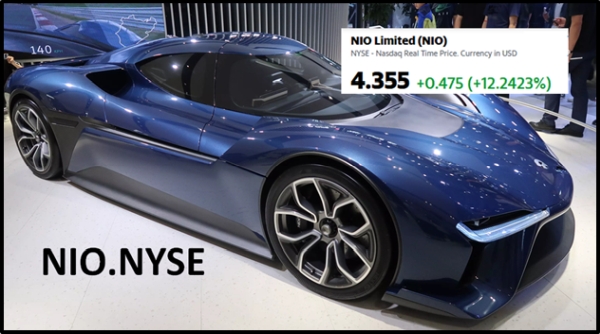 Today, shares of Chinese electric carmaker NIO (NIO.NYSE) booked a 12% gain by mid-morning after NIO announced that it was in talks to raise $1.4 billion to build a new factory in Hufei China.

Hefei is an automotive hub in Anhui province, which borders the province of Hubei, the epicenter of the COVID19 Virus.

NIO investors are jazzed about this news because NIO has a cash burn problem.  There has been widespread speculation, the company will implode in bankruptcy.

Meanwhile Tesla’s (TSLA.Q) Chinese-made Model 3, priced at $50,000 is competing with EV makers in China, including BMW and Mercedes-Benz, the local Xpeng Motors and NIO.

Details of the $1.4 billion financing are sketchy, but it’s believed the Hefei government is injecting money into the deal.

When the Chinese government invests, it doesn’t intend to lose money – or face.

Beijing has the ability to create “favored nations” status for certain blessed companies.

Sidebar: this writer once had a deal with China’s biggest state-owned film company.  When I naïvely pointed out that it still had to compete with local private companies, I was told, “Yes, we have to get in the boxing ring and fight the private guys – but we make the rules and we referee the fight”.

Sales of EVs in China fell 54% in January, 2020 according to the China Association of Automobile Manufacturers – the 7th consecutive month of decline.

“The news puts speculation around NIO’s funding issues to bed — at least in the foreseeable future,” stated a Sanford C. Bernstein Asia analyst, calling the deal “a bailout by the Hefei government.”

“We remain dubious over the company’s fundamental outlook, and remain concerned about Tesla competition,” added the analyst, “But the existence of a government backstop means the ‘EV call option’ thesis for investing in NIO gains some credibility.”

“Companies like NIO are reshaping China’s auto industry in the mold of the tech industry—with executives coming from China’s internet companies, they understand users, but not necessarily car manufacturing, a capital-intensive process,” stated Tech Crunch, “Chinese social media giant Tencent is one of its major investors, while search service Baidu is another.”

“Manufacturing is only part of the value chain,” stated Qin Lihong, NIO’s co-founder, “Apple has iPhones but it doesn’t make them. Foxconn built factories for them.”

NIO took a leaf out of Apple’s (AAPL.Q) playbook and outsourced production to a to a purpose-built factory run by JAC Motors (江淮汽车) a Chinese state-owned automobile manufacturer.

JAC Motors receives a fee for every vehicle that comes off the line, while NIO also has to compensate JAC for any operating losses during the first three years of the deal.

“We are a company with the genes of the internet, that means no one else touches our users,” stated Qin.

NIO’s cars are beautiful to look at, and receive lots of positive reviews.

In the YouTube video below a Norwegian man named Bjørn Nyland (Father Chinese/Mother Thai) weighs in.  Aside from his sparkling genetic pedigree, Bjørn distinguishes himself by being the only main-stream automotive reviewer to wear his T-shirts inside-out.

Strangely, for a company with so much Internet-innovation in its DNA, NIO’s software functions are clunky.

“Currently, AI voice-activation helper NOMI only understands Chinese,” stated Auto Express, “It isn’t the most responsive system, and needs to have commands done in a certain way for it to understand”.

The ES8’s biggest problem is that a lot of the software is simply not ready. Over the air updates will bring autonomous driving features later down the line, along with a more mundane 360-degree parking view. The hardware is all there, but the tech team has yet to catch up with production-ready software.”

“In some rainy and bad weather conditions, the “NIO Pilot” closes automatically because of poor visibility,” reported a Chinese national on We Chat, “NIO Pilot tends to follow the trajectory of the preceding car when it loses the correct route trajectory.”

Damaged lane lines will also cause vehicles on some roads to fail to execute the “change lane” instructions issued by the driver.

NIO believes that the biggest obstacles to EV mass adoption are 1. limited range, and 2. difficulty in re-juicing.

The company is focusing technological innovation on a suite of battery solutions to address these problems.

NIO’s app allows you to make a reservation at one of 17,000 charging stations across China. Or you can hail a mobile Nio Power Van to charge up your battery, adding 60 miles range in 10 minutes.

But the potential game-changer here is for NIO is battery swap stations.

There is already a pilot network of 40 battery-swap stations along key intercity motorways.  A robot will replace your battery with a fully charged one in just 5 minutes.

Having the Chinese government own a chunk of NIO will smooth NIO’s pathway to profitability.

Government subsidies for China’s EV market have recently been reduced.

The switch in strategy (investing directly in NIO) may be the government’s attempt to pick a winner in a crowded field.