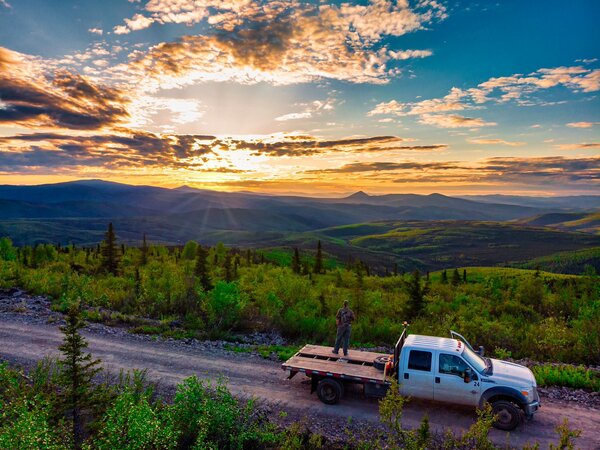 (Once again… I’m currently in Mexico looking at a production/development company. Internet access is limited. In lieu of fresh content, a few recent articles from my Highballer site will have to suffice over the next few days)

Central Yukon, just south of Dawson City, was the scene of a late 19th-century gold rush where roughly 20 million ounces of placer gold lay within easy reach. This is where Shawn Ryan’s White Gold (WGO-TSX-V) holds a dominant land position—some 40% of the prolific gold district.

The hardrock source of all this placer wealth has remained a mystery for over a century. But Ryan and crew are closing in on it.

Shawn Ryan, Yukon prospector extraordinaire, compares the hunt for this hardrock source to tracking down Big Foot—there are tracks here and there, but so far, no beast.

The following slide from the White Gold investor-deck gives you a birds-eye view of what the company controls in the district. 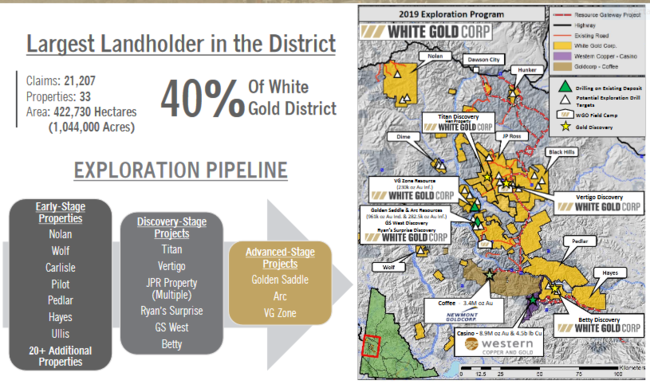 Note the ‘Exploration Pipeline’ to the left of the map.

Developing a project pipeline on such a massive scale (422,000 hectares) requires a disciplined, systematic, and innovative approach to exploration.

The Dawson district has limited rock outcrop exposure (2% to 3%)—normally that’s a huge disadvantage. But the region is unglaciated.

“Unglaciated Yukon land results in soil that is undisturbed, therefore samples are indicative of the rock directly below.”

Ryan figured out that extracting, assaying, and mapping soil samples is the key to diving the district’s subsurface mineral potential. Just as importantly, he figured out that traditional soil samples—your standard six-inch-deep ‘B-Horizon’ type samples taught in geo-school—was insufficient. You need to go at least 2 1/2 feet down to get a proper response in this region.

Soil augers, on a tightly spaced grid, is how Ryan is systematically exploring this expansive land base.

This soil sampling is ongoing—roughly 15,000 1 lb samples across eight projects were collected in 2019. Without a doubt, some of these samples will generate exploration targets that’ll warrant a closer look next field season.

This intensive emphasis on geochemistry could lead to another Coffee—a deposit Ryan previously owned.

Note the scale on the map below. Note White Gold’s properties relative to the 3.2M ounce Coffee Project being developed by Newmont-Goldcorp. Note White Gold’s resource base (Gldn Saddle-Arc and the VG Zone). Note the multiple discoveries the company tagged across its dominant land position. 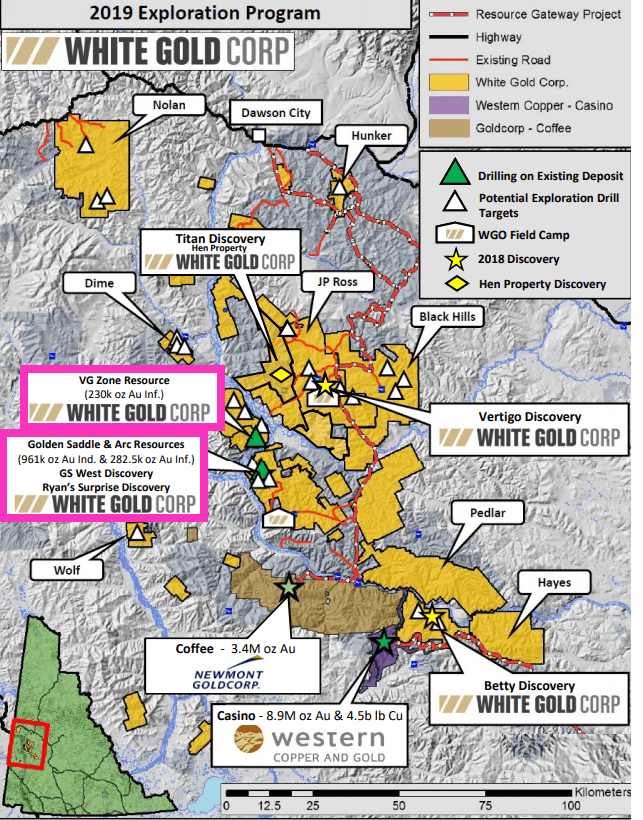 Getting back to tracking the source of the region’s placer production—the JP Ross property holds the first visual evidence of the style of mineralization that could have generated these placer riches. JP Ross hovers over a number of these prolific placer creeks.

In 2016, Ryan took all of his properties and put them into a single-vehicle—White Gold Corp.

Agnico Eagle came in and took down a 19.9% interest in the company for $14.5M in late 2016. These funds were spread across WGO’s project portfolio with a three-year business plan utlizing the exploration protocol described above.

Kinross entered the fray in May 2017, taking down a 19.9% interest in the company in exchange for its entire White Gold project portfolio, including Ryan’s original discovery, Golden Saddle.

Ultimately, the company plans spin-off deposits that evolve into significant development projects. This will allow the Big’s, like Agnico Eagle and Kinross, to drive the SpinCo further along the development curve.

White Gold shareholders will benefit from this arrangement by receiving SpinCo paper and not having their original WGO position diluted.

Golden Saddle and Arc hold the bulk of WGO’s resources.

An updated resource estimate is expected in Q1. 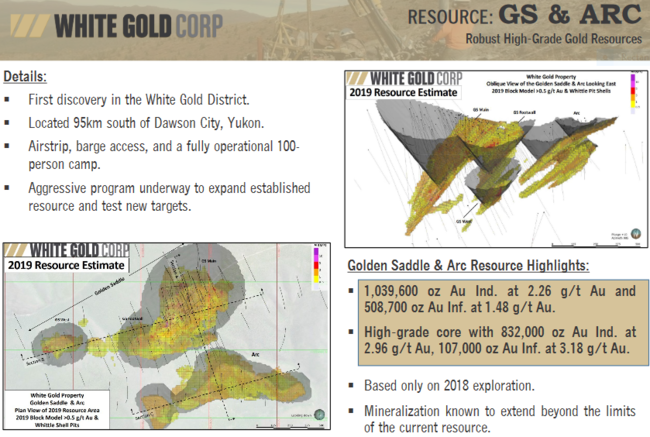 The VG Zone, located across the river from Golden Saddle, has an Inferred resource of 230,000 ounces of gold within 4.4 million tonnes at 1.65 g/t Au. The company sunk 10 RC holes into the VG Zone in 2019—results are pending.

There’s room to grow ounces in the direct vicinity of these resources.

Henderson Creek has been placer mined for over 100 years. It runs through the company’s JP Ross property where a number of recent discoveries (Sabotage, Stage Fright, Frenzy, Life Boat, etc) have been made.

As strange and unlikely as it may sound, this is virgin territory, which is crazy when you consider roads crisscross the entire area. And these discoveries are almost certainly the source for all the placer gold below.

No one ever thought to explore the high ground around this prolific placer creek… until now. 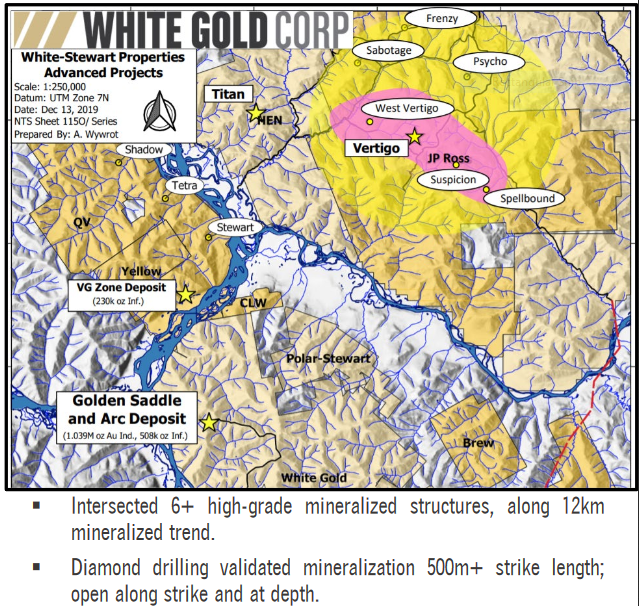 The company’s Vertigo discovery is on a ridge elevated above a productive placer creek. Vertigo’s discovery hole assayed an impressive 30.46 meters @ 22.47 g/t Au from surface (inc 3.05 meters @ 59.30 g/t Au). This turned out to be a down-dip hole running parallel to the mineralization.

Additional assay highlights from Vertigo include:

Additional discoveries on the high ground overlooking Henderson Creek include: 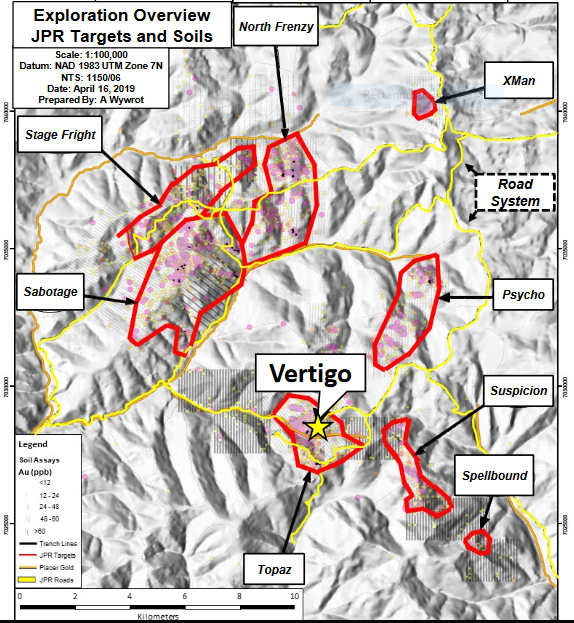 The gold-rich placer creeks, like Henderson, are highlighted in yellow on the above map. As Ryan is oft heard to say, if this were anywhere else in Canada, the high ground above these prolific placer creeks would have been probed years, if not decades earlier. Welcome to the Yukon.

The White Gold headline that really got me excited dropped on Nov. 26, 2019:

Highlights from this Nov. 6 press release: 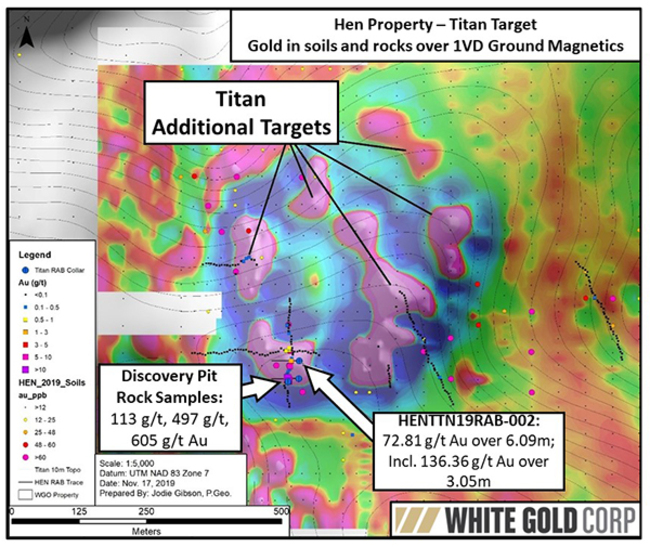 Once again, the Titan target produced soil samples of up to 113 g/t Au – the highest grades ever encountered in the company’s 400,000+ soil sample database.

This 650m x 650m anomaly—the purple images highlighted above—if you were to place all of these iron-rich magnetite structures end to end, you’d get a 1 km long linear drill target.

Each of the magnetic targets highlighted above will likely see a probe with the drill bit next summer.

The plan is to mobilize a diamond drill rig early in the season, drill, wait for assays, then prioritize targets for a second round.

But Titan’s gold isn’t limited to these magnetite structures. Soil samples show a distinct trend outside the magnetic anomaly. 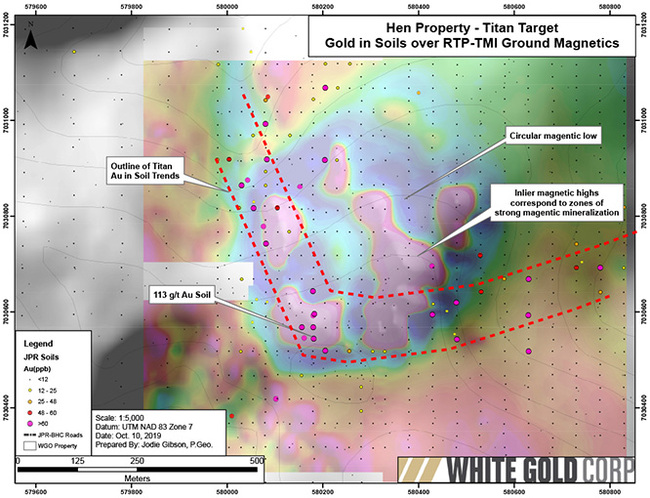 This is shaping up to be a nice discovery—a discovery based on believable science.

Just a few days back, on Feb. 6, the company dropped the following headline:

Adding to the current ounce count around the company’s main resources appears to be a foregone conclusion.

The number of targets opening up in the direct vicinity of the Golden Saddle/Arc deposits (1,039,600 ounces Indicated – 508,700 ounces Inferred) continues to grow. 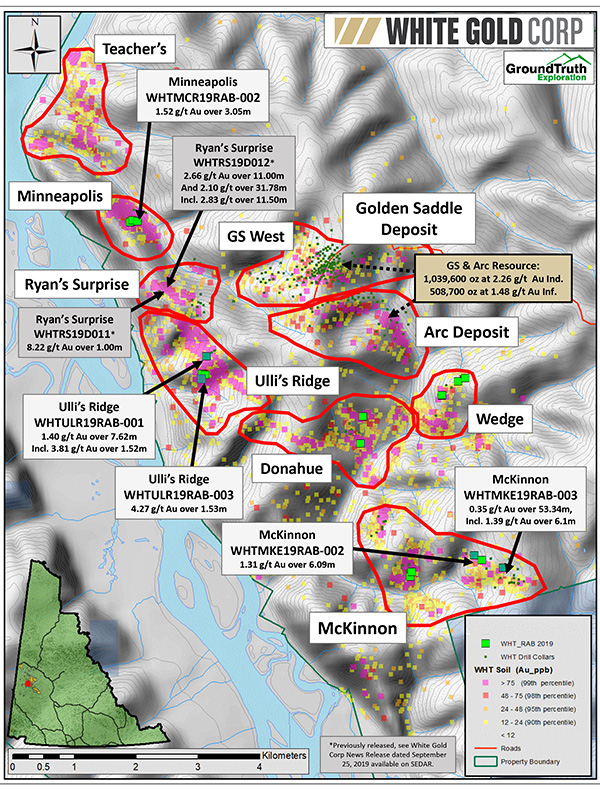 “We are very encouraged with these positive drill results in such close proximity to our flagship deposits with our first RAB drilling on newly identified targets. With only a few holes drilled on each target in a first-pass, shallow drill program, this further validates the effectiveness of our exploration methodologies, the large scale of the mineralized system and the potential for additional new discoveries on this underexplored trend which has now been expanded to an area of roughly 55 km2. We look forward to our first drilling on the additional new targets identified on this trend and following up on these results in the upcoming season.”

White Gold has the endgame potential I talked about in my maiden report. And these Yukon ounces will go at a premium if (when) a resource-hungry predator begins closing in on the company. Keep in mind both Agnico Eagle and Kinross each hold 19.9% of White Gold common. Also keep in mind that the neighboring Coffee Gold Project was taken out for $175 per ounce.

You do the math on the company’s current resources (x $175 per oz) and compare the result with WGO’s current market cap.

With the company’s massive land position in what is largely virgin territory, the discovery potential has to be considered excellent.

I like this setup. The company’s shares have retreated to a level where the downside risk appears limited.

Full disclosure: The author does not own shares in White Gold, but may initiate purchases in the coming weeks.