DEFN’s Wicheeda Project is located in the Prince George region of British Columbia.  The company has completed a 2,000-meter drill program “designed to test the northern, southern and western extent of the Wicheeda deposit.”

“REEs ⁠- often referred to as the ‘Vitamins of Chemistry’ – are everywhere,” explained Equity Guru’s Greg Nolan a month ago, “

The one aspect of exploration and development that can trump all others—just ask any seasoned CEO in this arena—is metallurgy. – Greg Nolan

“Metallurgy is the science (some prefer the word ‘art’) of extracting valuable metals from their ores and modifying said metals for their intended use,” stated Nolan. “On October 23rd, Defense dropped news that should have prompted an arena wide standing oh.”

The company was optimistically targeting a total rare earth oxide (TREO) metallurgical recovery rate of 80%, and a TREO high-grade concentrate of 40% from these tests.

These (final) numbers were impressive:

Perhaps it would be unfair to expect the next set of results to meet that high benchmark, but that’s what happened.

“Samples of Wicheeda flotation concentrate used in a hydrometallurgical test program led to the successful development of a flowsheet capable of processing the concentrate to a high grade mixed REE hydroxide precipitate,” stated Defense Metals.

We believe these exceptional results show the Wicheeda REE Deposit mineralization is readily amenable to processing via well-established flotation, and hydrochloric acid leach / caustic crack REE extraction methods. Based on these positive results we expect to finalize our plans to commence continuous pilot plant testing in the near future. – Craig Taylor.

Military spending is a significant demand driver of REEs.

DEFN stock price has been on a bit of a tear lately. 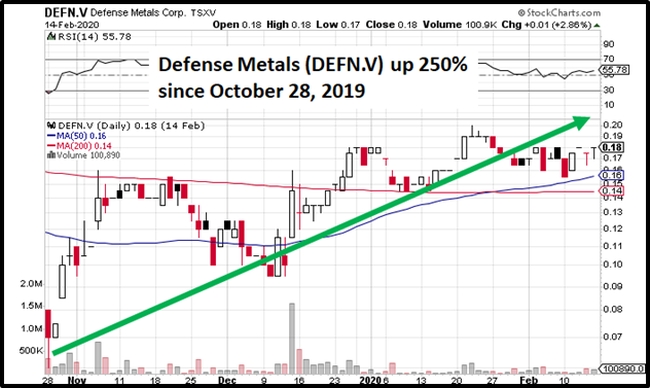