If the cannabis industry is desperate for capital, time to bet on the guys with capital

With a little over an hour left in the year 2019, past 10PM on December 31, I saw a news release from James E. Wagner Cultivation (JWCA.V) about a small $2 million loan they’d taken out.

The timing of the announcement of their loan was surely not coincidental. Actually, thinking about it, ‘payday loan’ might be the more appropriate term to have used.

JVCA took out a debenture financing of $2 million at an interest rate of 25% annually. That’s just the first tranche of the deal; there’s another $8 million out there if they want it.

My credit card, abused as it has been, costs me less interest to maintain than JWCA’s loan. Money Mart in Canada will give you a payday loan at 29.6%, if you’ve been good (though they’ll charge you as much as 46.9% if your credit score runs at MedMen (MMEN.C) levels of disaster), and while that’s just a horrible abuse of the needy, at least they don’t also want warrants from you, which JWCA agreed to happily dish out on top of their interest.

I pay little to no attention to JVCA and never have until recently, which has probably been a good thing considering their stock chart and the corn maze of loans and royalties and raises they’re laid out to get to where they are, which isn’t anywhere good. 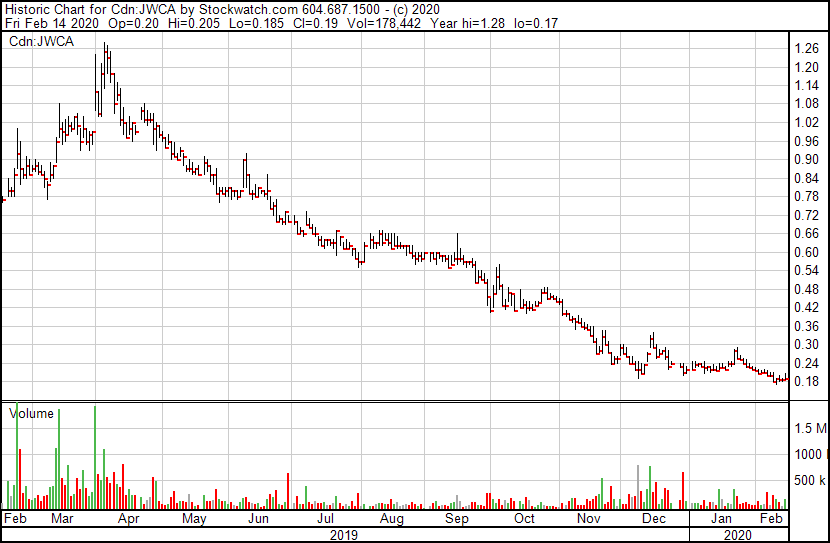 ..but this New Year’s news pissed me off.

If you’re so deeply troubled financially that the best arrangement you can muster has to be quietly slipped out into the news flow while most of us were wondering if we should have a sixth drink of the night, you should probably be having some very serious and open discussions with your investors about whether this is a going concern anymore.

It’s not as if the Lind Global Macro Fund, which was coming to the party with the cash JWCA wanted, only engages in usurious rescue deals. Hell, when they really like a company, they’ll give them 8% interest, as demonstrated by the $4 million brought to an educational technology company called Boxlight almost a year ago.

The investment comes in the form of a $4.4 million convertible note with a 24-month maturity and a fixed conversion price of $4 per share of class A stock. A total of $4 million will be funded under the note and the company is required to make monthly interest payments at the rate of 8% per year on the unpaid principal amount of the note and principal payments in 18 equal monthly installments of $244,444.44.

The debt-to-stock conversion price on the Boxlight deal was around 1/3 more than where the company had been trading when the deal was executed, indicating Lind had all the confidence they needed to know they’d see a return.

The conversion price on the JWCA deal was done at market, though that stock has fallen precipitously since. Do your own math on what demonstrates.

This wasn’t the first time JWCA has gone panhandling for funds. In November of last year they took out a $4 million loan to cannabis industry financier Trichome Financial (TFC.C), which has a business model focused on investments in what could conceivably and charitably be called distressed assets. That loan cost 9.25% with a debt to equity conversion price set at a 5% premium to market. Trichome had floated JWCA cash before, earlier in 2019, just a few million to tide them over.

To get that, JWCA had to put up present and future assets as collateral, and convince someone else to give them more money.

JVCA said at the time the Trichome financing would allow their company “to finance the completion of construction of its facility located at 530 Manitou Dr. in Kitchener, Ont., to finance the launch of new products and for general working capital requirements.”

But a month later, they were raising money from Lind for the same purpose, and all the while looking to raise more money still through a $7 million private placement, for the same stated purpose.

That didn’t go so well.

With the stock price at $0.26 and looking to raise $7.5 million at just $0.21 per share, a 20% discount, they could only manage a bit under a million in their first tranche, even with insiders taking up a quarter of the raise.

James E. Wagner Cultivation Corp. has completed the initial close of its non-brokered private placement whereby the corporation has issued 4,734,284 units of the corporation for gross proceeds of $994,199.64.

Jusssst a little short. So they kept it open.

That last tranche came from Canopy Rivers (RIV.T), which acquired a much larger slice of JWCA earlier in its lifetime and is, presumably, looking to keep that now 15%  investment from going nips up, but wasn’t enthusiastic enough to fill the rest of the deal. On top of that, Canopy had loaned JWCA a few mill to get their license way back in the day, and is owed a 20-year $0.375 per gram royalty on anything JWCA grows in their first facility. to a minimum of $475k per year – equal to a quarter of JWCA’s current $2 million annual revenue.

But that’s not all – all that money was needed to pay off a loan given the company (a very generou bank interest +0.5%) by their construction partners a year ago, with a payment arrangement that JWCA has had to defer twice.

This has to be some of the most arduous, expensive, and apparently crucial financing we’ve seen yet in the weed sector. Trichome came in hot, got a good deal considering, but clearly wasn’t ready to hand JWCA all the cash they wanted, then the rest of their cash just trickled in, often at great expense, and often only to cover existing debt calls. Now, Trichome has first dibs on the JWCA facility should JWCA default, while Lind gets second grab at whatever’s left in the case of any payment default, and Canopy takes the royalty money which will make it all the harder to pay the others.

Retail investors, assuming if the worst happened and everything went belly up, they’d at least get some sort of piece of a liquidation, are way back in the line.

If you total all of that money raised and debentures placed and offered together, you’re looking at $17 million-plus of financing for a company that, today, has just a $19 million market cap.

JWCA is a horror show. It’s a human caterpillar of cannabis financing deals, and retail investors are stitched face-first to its ass.

But you know who isn’t?

Look, there’s no disputing the cannabis industry has been plundered, but it wasn’t the penny stock players that plundered it. It wasn’t the promoters or the shitty CEOs flying private, it wasn’t the market cap queens that only cared about generating stock price and not a company behind them, or the dullards who just borrowed until nobody would lend to them anymore.

The plunderers were the financiers. The Canaccord’s and the BMO’s and the MMCAP’s, the Auxly’s borrowing money from MMCAP and re-lending it to folks down the food chain at increasingly crazy costs, only to end up ravaging the rubes in court. It was the Aurora’s chasing the Canopy’s and the bankers giving as much money as either wanted until the interest rates became noticeable and the vig unpayable.

But we know that. None of this is news. The question isn’t who is to blame, the question is, on a personal basis, how do we make money out of the market heading down and the financiers making bank?

Why Brenda, the answer is obvious.. you invest in the financiers.

Trichome Financial isn’t the one gouging the hell out of JWCA in this deal. Sure, their interest charges aren’t small, but the folks they’re giving them to aren’t necessarily reliable on the repayment front. 9% interest given to a JWCA that just got its license is fair; far fairer than the 25% the private financiers at Lind came in for. And I’ve no evidence Trichome is shorting the company it loaned money to, which is MMCAP’s standard operating procedure, earning money on the interest, and on the short, and on the cheaper debt-to-stock convert, and while Trichome will get its hands on JWCA assets should that company default, it doesn’t appear to be the preferred outcome, which one might suggest looking at Auxly recently.

A spin out from Marc Lustig’s Origin House (OH.C), nee CannaRoyalty, that was consumed by Cresco Labs (CL.C) for a fat 10-digit fee, Trichome does much the same as what Origin House did – it finds undervalued, undercapitalized assets, tosses fair-but-far-from-free financing their way, and profits nicely should that asset do well or poor.

We can sit here and whine about the way big stupid financial players have created a dumb cannabis industry and then pulled the rug out from under it when it was most dependent on them, or we can look to those that offer the key to emerging from that mess and say, “I want to be a part of the solution.”

I’m all about being a capitalist, but the pack animals that take more than their fair share of the Savannah, eventually eliminate their own food source. Sustainable, aggressive, rescue investment is the future and offers the potential for all to do well.

Trichome lays it out pretty clearly in its MD&A.

Since the middle of 2019, a series of events have contributed to creating a negative feedback loop for investor confidence in the cannabis sector. A detailed discussion of these events, as well as key learnings by management of Trichome over the last 18 months was published by the Company in a press release on October 7, 2019. Since then, operational and financial performance in the cannabis sector have only deteriorated. This has led to a highly favourable environment for Trichome.

The positive trends for Trichome’s business model include:

At the time of writing that, Trichome had closed seven credit deals with six parties, with three of them having been repaid in full.

The weighted average effective interest rate of the portfolio is approximately 14%, excluding warrants and equity consideration.

As of November 28, 2019, the annualized interest revenue from the portfolio is approximately $1.8 million.

Interest revenue is expected to grow commensurately with further deployment of the Company’s cash into income‐generating credit investments.

That’s just a good business. Granted, it’s not going to triple your dough inside two weeks, but if you’re losing money on the LP investments you’re still in that keep slipping, owning a piece of the financiers keeping those companies from dying, and set to take in a nice haul should they end up with a default, is a decent hedge.

An example: MYM Nutraceuticals (MYM.C) was advanced $3 million by Trichome at 14% interest. A further $2.5 million has yet to be taken up, but accrues a 6% interest rate ‘standby fee’ in the meantime. Trichome is effectively being paid to NOT lend out that $2.5 million to anyone else for a bit. Should the loan default, Trichome gets first dibs on assets.

Another: CGS foods, AKA Ganjika House, borrowed $1.25 million to build out and indoor/outdoor grow operation. They repaid early, but Trichome now holds warrants equal to 10.7% of the borrower.

This is a business I want to be in. Lustig has already turned a $25 million stake into a ten-figure buyout once, mostly financing small cannabis startups and taking royalties on them. Now he’s doing it again, only instead of startup capital, now he’s offering stay alive capital. 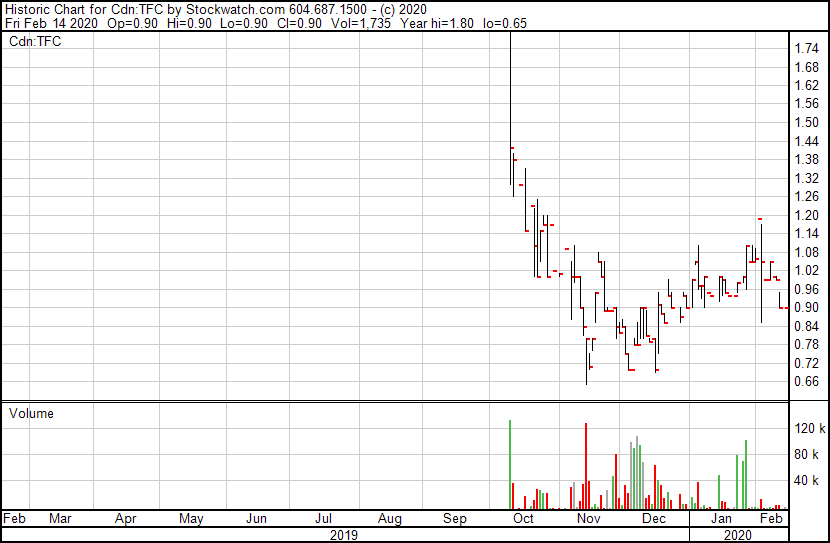