You’ve gotta love it when a plan comes together: 1933 Industries (TGIF.C), which has been banging the same ‘we’re grownups, we’re doing it right, hang tight’ drum for several years now, dropped news this February 14 that will make any Valentine’s heart swell with joy.

Following the completion of a combined 20,000-square-foot expanded cultivation, extraction, manufacturing and distribution facility in the Los Angeles area, the company began harvesting its first cannabis crop this week to be utilized for both its proprietary brand Alternative Medicine Association (AMA), as well as for its licensing partner luxury brand Blonde cannabis, with products earmarked for dispensaries for the first time outside of Nevada.

And with that, 1933 Industries is legitimately a US multi-state operator.

Over a period of approximately three weeks, harvested plants will enter a drying and curing process and laboratory testing with product expected to be available in early March.

And if that’s not enough, more:

The company established local manufacturing for its proprietary cannabidiol wellness line containing California-compliant full-spectrum CBD for direct distribution to local dispensaries. The company reports that the initial run of 30,000 units of full-spectrum CBD Canna Hemp products passed required state compliance testing and will be delivered to dispensaries this week.

1933 management have long told us they won’t allow the share price to factor into their day to day running of their operation, that while they care about the stock being non-reflective of their real value, they weren’t about to change their business to put focus on that. Many Canadian LPs are now paying the price for their tendency to go the other way, and put share price elevation ahead of building an actual business.

“While the landscape of the entire cannabis sector has changed dramatically and continues to be under pressure, we would like to reassure our investors that the current share price does not reflect our business operations as we continue to execute our strategy. With two capital projects now completed, we are on track to deliver two key infrastructure projects over the next several months that will allow us to fully control our input materials, lower our costs of production, increase our revenues and margins with profitability as our key priority in fiscal 2021 and beyond. We are continuing to achieve further efficiencies across our operations, managing our cash position conservatively and controlling expenses to endure current market conditions.”

Like a soothing balm rubbed onto my nips by Victoria’s Secret models while The XX plays background music in the middle of a mushroom trip. Peak satisfaction.

A lot of the companies we write about had one major plan when they were created, which was ‘to be a weed company.’ Not a real weed company, a company that sells what it produces for more than it costs to produce, but just ‘be in the weed business and build value.’ Very few came to market looking to put actual building blocks in place and emerge over several years as a reliable profit maker and dividend payer.

1933 isn’t profitable yet but, as you can see, they’re still finishing their build out. The company began life as the bro-focused Friday Nights Inc., and looked to become the place you’d throw your cash getting fucked up when you landed in Vegas.

Over several months, management made the concerted effort to change direction, which the market didn’t respect nor reward – and, to a large extent, still doesn’t.

Then CEO Brayden Sutton told me, “I hate that mentality, that this industry is about guys in Affliction t-shirts getting shitfaced. That’s the sort of thing that real investors want nothing to do with, and institutions won’t go near unless they’re doing deals that favour them in a major way. That’s a small market and we want to do business with the rest of the population.”

Sutton worked with ‘the culture’, bringing aboard brands that had enthusiast credibility, creating others that appealed to a wider audience, and looking to use the tax friendly state of Nevada to expand outward from, rather than setting up as a Strip attraction.

Current management have continued that sensibility, and even doubled down on it. Expansion into California brings competition, granted, but it also brings a much larger, mature market than anywhere else in the US.  The thinking goes, why be the first guy through the wall and end up with a cracked skull, when you can take what works and be a sophisticated addition to the options of a large audience?

“Our focus continues to be the strengthening of our existing operations in Nevada with increased production capacity, the growth of our California operations and the generation of new revenue from that market and the advancement of our capital initiatives while capitalizing on the sale of our line of CBD Canna Hemp products across the attractive U.S. cannabis markets. A revamped e-commerce website for Canna Hemp will be launched this Friday with a direct to consumer strategy. Our company’s mission is to provide safe products that focus on the benefits of the plant and that are in line with consumer demands, offering quality of ingredients and consistency at affordable prices.”

That message is starting to connect with investors. Over the last week, TGIF stock is up a whopping 35%. 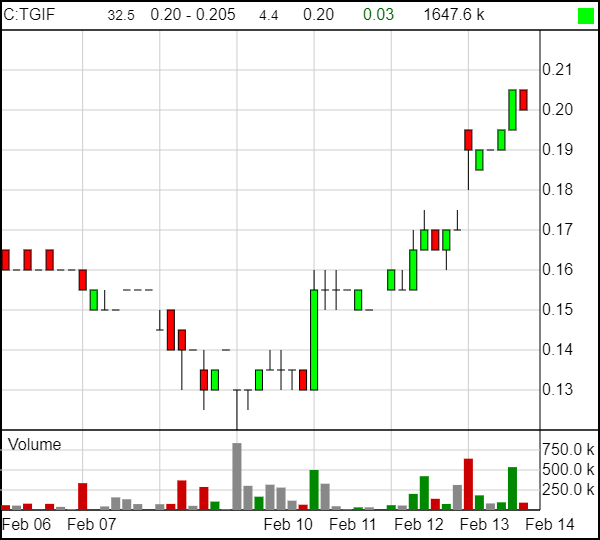 At the most recent quarterly financials, 1933 sat on over $14 million in cash. It boasts a very fair $48 million market cap currently, considering how much dough they’re sitting on, and that the most recent $3 million quarterly loss would see them through the next year and a half, even if nothing else on their balance sheet changed.

We do not expect they’ll need all that runway. 1933 is doing it right.

FULL DISCLOSURE: 1933 Industries is an Equity.Guru marketing client and has been since it went public.