When a $63 billion company announces quarterly profit 63,000 X smaller than its market cap – that would not normally be cause for celebration.

But that’s what happened today..

Ottawa-based Shopify (SHOP.T) (SHOP.NYSE) reported a profit of USD $771,000 in its latest quarter, compared with a loss of $1.5 million a year earlier, while its sales rose 47%.

The profit was a penny per share for the three-month period ended Dec. 31, 2019 compared a penny loss for the last three months of 2018.

Shopify’s e-commerce platform is used by over one million businesses in 175 countries.

For the last year, Shopify has been a better investment than Amazon.

“2019 was a milestone year for us,” stated Tobi Lütke, Shopify’s CEO. “We’ve earned the trust of more than one million merchants, and we are motivated more than ever to keep lowering the learning curve so anyone, anywhere can become an entrepreneur.”

Lütke is a talented 39-year-old high-school dropout who first launched an on-line snowboard shop – and then pivoted into selling absolutely everything.

Lütke is better at e-commerce, than he is at public speaking.

In a world where global IQ rates are dropping, Lütke’s drive to “lower the learning curve” is a sound strategy.

Shopify is blowing a lot of cash, trying to attract more merchants to its platform.

In 2019, it spent $1 billion to build fulfillment centers in the U.S., trying to compete with Amazon by delivering packages in less than 48 hours. This effort was described by Shopify CFO Amy Shapero as “energizing the flywheel.”

Shopify is often compared to the “World’s Biggest Store” – Amazon (AMZN.NASDAQ) which just turned 26 years old.  AMZN took years to be profitable, and like Shopify, its revenue growth is more impressive than its profit growth. 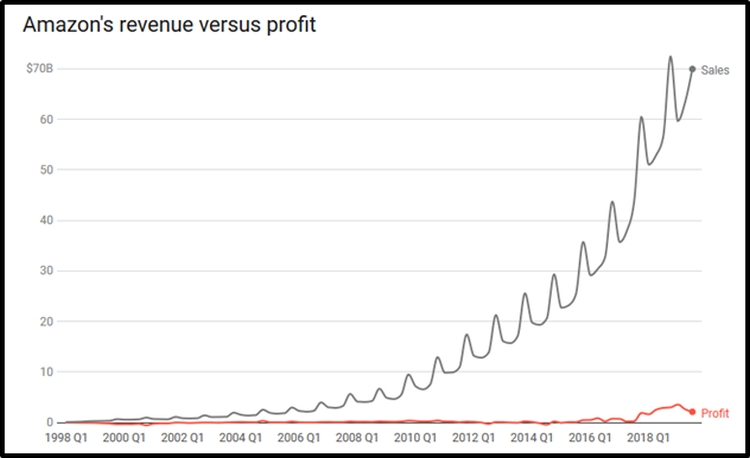 Many of Shopify’s users are delighted with the platform.

“100% of the [Shopify users] I polled said they did not regret their choice in the slightest,” stated Merchant Maverick, “Here at Merchant Maverick, we love Shopify for its ease of use, web design, integrations, and affordability”.

On the review website Trust Pilot – which features over 1.1 trillion reviews – Shopify rates a putrid 1.5 stars.  To be fair, in the old days, unhappy consumers had to bitch privately.  With the availability of public platforms, the nay-sayers are emboldened.

“Shopify allowed a company called “soeiefjghb” steal $144.90 from me,” complained one irate customer, “They allows shady companies to do business through their sites.”

On Trust Pilot, Amazon is rated slightly higher than Shopify, at 2.5 stars.

One of its merchants was the right-wing news site Breitbart – who instructed migrant workers to “Get in line”.

“When we kick off a merchant, we’re asserting our own moral code as the superior one,” countered Lütke in a measured rebuttal, “If we start blocking out voices, we would fall short of our goals as a company to make commerce better for everyone.” 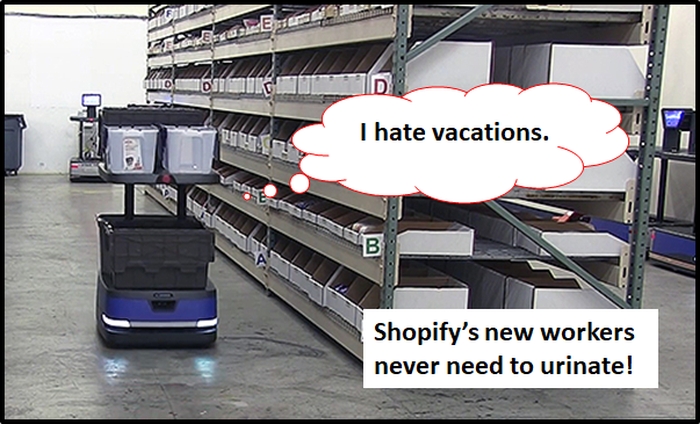 When I was a scrappy, snarly outlaw in my 20s, my older sister once complained that our Mother favored me because, “Every time she looks at you, she feels grateful that you are not in prison.”

Create low enough expectations and people celebrate the fact that you are not a serial killer.

So it is with Shopify.

The company has been bleeding for so long, a quarterly profit of 771K is enough to elicit a chorus of kazoo-blowing from the investment community.

On December 31, 2019, Shopify had $2.4 billion in cash, cash equivalents and marketable securities, compared with $1.97 billion a year earlier.

Full Disclosure: Although this article mentions Shopify CEO “Tobi Lütke” – complete with the (2-dot) umlaut – the writer does not know how to digitally create an umlaut. The effect was achieved through the copy/paste function.