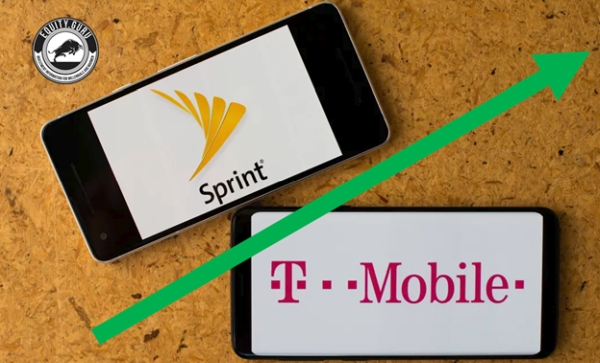 On February 11, 2020 investors woke up to the news that Manhattan District Court Judge Victor Marrero ruled that wireless carriers Sprint (S.NYSE) and T-Mobile (TMUS.Q) are free to merge.

History proves that mergers can create synergy. Example: Disney and Pixar combined their creative talents to produce WALL-E, Brave, Inside Out and Frozen the fifth-highest grossing movie ever.

Sprint and T-Mobile are both internet service providers and mobile network operators. Together, they have a customer base of about 140 million people.  Merged, they will be able to trim operating expenses and raise prices, which is why investors are piling in today.

Judge Marrero said that opposing states “failed to persuade him that a merger of the No. 3 and 4 carriers would harm consumers”.

Sprint and T-Mobile first tried to merge in 2014, but were denied by President Barack Obama’s regulators who believed that “consolidating the market would lead to higher prices.”

The ruling comes 23 months after the merger intent was announced for a second time. The Trump administration signed on to the deal in 2019.

“Today was a huge victory for this merger,” stated T-Mobile CEO John Leger, “We are finally able to focus on the last steps to get this merger done!” 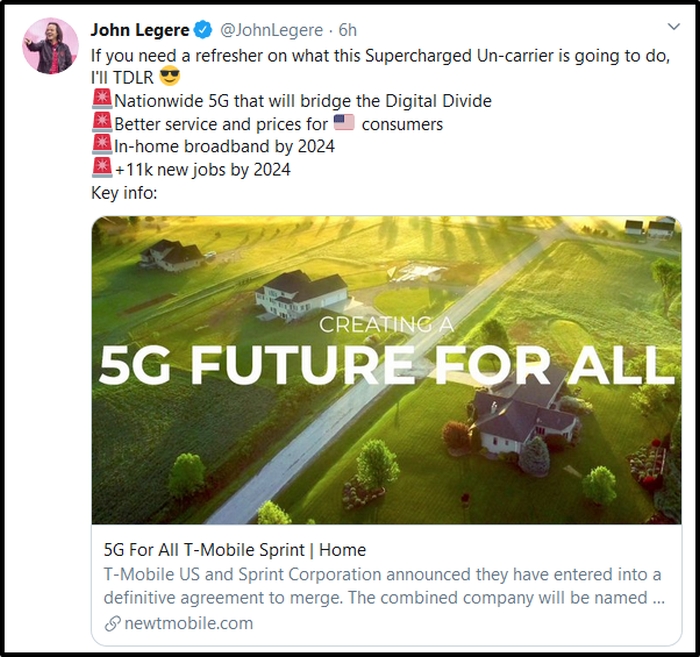 Reading the tea leaves, it seemed likely that Judge Marrero might rule against the merger.

A President Bill Clinton appointee, in 2007, Marrero struck down a section of the Patriot Act, ruling that FBI investigators have to seek a court’s approval to raid the data bases of internet providers.

“That portion of the Patriot Act was developed after the September 11th attacks,” stated Marrero, “It raised a lot of First Amendment and Fourth Amendment concerns.”

“T-Mobile has redefined itself over the past decade as a maverick that has spurred the two largest players in its industry to make numerous pro-consumer changes,” stated Marrero.

Not everyone shares Marrero’s enthusiasm for another wireless mega-company. 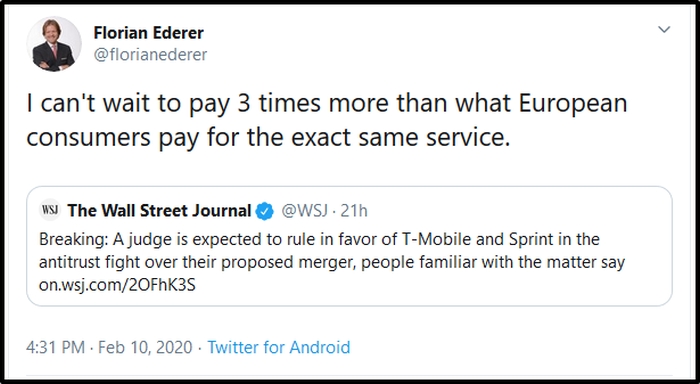 The states “disagree with this decision wholeheartedly, and will continue to fight the kind of consumer-harming mega-mergers our antitrust laws were designed to prevent,” stated James.

James stated the ruling was a “loss” for Americans and she warned the states may file an appeal.

Experts hired by the NY AG predicted that the merged company would cost subscribers $4.6 billion in raised fees.

“From the start, this merger has been about massive corporate profits over all else, and despite the companies’ false claims, this deal will endanger wireless subscribers where it hurts most: their wallets,” stated James.

Judge Marrero naively expressed doubt that the merged company would “be so bold” as to raise prices after the merger.

With all due respect to Marrero, you can be damned sure the merged T-Mobile will gouge consumers as deeply as it can, without losing market share.

FCC Chairman Ajit Pai declared that the merger “will help close the digital divide and secure United States leadership in 5G,” calling it “a big win for American consumers.”

That’s why Americans spent $370 billion on prescription drugs in 2019 – about double per capita what other western companies spend.

T-Mobile and Sprint promised the FCC they would deploy a 5G network covering 97% of the U.S. population within three years of closing the deal.

The merger still requires approvals from California’s utility board and a federal judge in Washington who must sign off on the Justice Department’s decision.

Since lobbying for a merger with Sprint, T-Mobile has spent $195,000 at Trump hotels.