PAT is an A.I-driven concealed weapons-detection company that is currently transitioning from being a technology incubator – into a hardware and sales company.

Some investors – and regular folks – are confused about the difference between A.I. (machine intelligence) and “clever software” (well constructed algorithms).

An algorithm is a set of rigid instructions — a coded recipe that gets executed when it encounters stimulus.  For instance, if I type “artifishal” – my word processing software flags that as incorrect. The software is not being intelligent. It’s just informing me that “artifishal” is not in its dictionary.  I can right-click and select “Add To Dictionary” – but that’s not A.I – that’s me manually modifying the software.

A.I is a group of algorithms that can modify its own instructions in response to learned inputs and data. This ability to adapt and grow based on new data, is described as “Artificial Intelligence.”

“A.I operates in an automated mode without human intervention,” stated Niranjan Krishnan, head of data science at Tiger Analytics, “Data is created, transformed and moved without data engineers. The system learns continuously and gets better with time.”

For example, if stationary armed gunmen have a postural “tell” – it can learn that.

If successful, this will bring next-level machine learning to Patriot One’s PATSCAN series of programs by allowing their devices to learn and adapt to new threats.

“Xtract is advancing the state of artificial intelligence by developing deep neural network technology that scales how machines learn. This technology is core to our platform which runs more effective and reliable business solution applications.”

The collaboration must’ve gone well, because three months later, Patriot One announced the acquisition of XTRACT Technologies and all its related interests, assets, and intellectual property for consideration for $6 million and the issuance of 9,422,956 Patriot One common shares (currently worth $1.52/share). 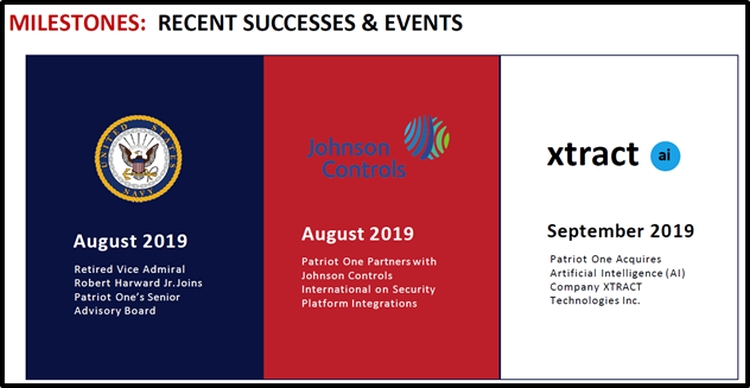 The Extract.ia contract is for a project related to improving situational awareness for the Canadian Armed Forces and security personnel using video analytics, artificial intelligence and augmented reality.

This project will continue previous work completed by Xtract.ai for the CAF to develop technology solutions to augment the situational awareness of their soldiers and address the following challenges:

This is not Patriot One’s first government contract.

On January 30, 2020 PAT announced that it has been awarded a $780,000 contract by Innovation Solutions Canada (ISC) for the Canadian Department of National Defense (DND).

The ISC program allows innovators to keep control of the intellectual property, get their innovation tested in real-life settings and help advance products to market faster.

PAT’s weapons detection technology was evaluated on the merit of innovation. Upon pre-qualification, the program sourced a Canadian Government Department as test partner.