If you’ve had your eye off the biotech sector recently because it doesn’t directly involve gold or cannabis, you’re missing out on one of the better casinos out there. For the high risk, high reward investor, nothing is quite like the thrill of correctly picking when a long, drawn out, US Food and Drug Administration process of approving a new drug finally gets over the line.

Yesterday morning, US-based Vivus Inc (VVUS.Q) was a $24 million market cap biotech firm hoping its Pancreaze pancreatic enzyme medication might be approved to sit on shelves longer and enjoying the fact that someone out there bought a little stock for a change.

A day later, it became a $33 million market cap biotech firm with a new product set to hit shelves and a stock price up 47%. As investors raced to get in – or take their long awaited profits – the trading volume went bonkers. 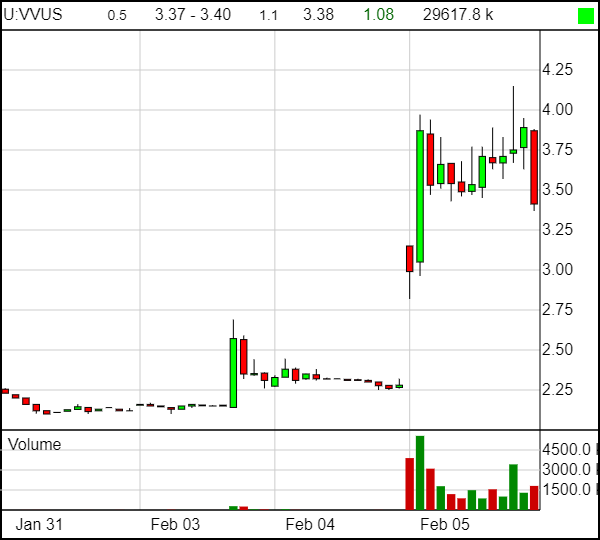 “The approval of this sNDA is an important milestone for VIVUS and for the patients with EPI we seek to treat,” said John Amos, Chief Executive Officer at VIVUS. “It highlights our ability to derive additional value from our marketed products and allows patients to store PANCREAZE for longer periods of time, which may help to reduce their out-of-pocket expenses. We also expect that the 36-month shelf life will limit the amount of returned product and, over time, will lower our overall supply chain costs.  We look forward to working with Nordmark and our supply chain and commercial partners on the transition to the improved formulation.”

For many in this sector, their bets are based around getting a brand new drug approved, which takes months and years of clinical trials and testing and bureaucratic moves and a lot of hope.

For Vivus, the challenge was less challenging; they already knew their medication worked because it had been earlier approved for sale. What they were hoping for is approval for a *better* product, which might seem like an obvious win but still requires a long drawn out bureaucratic process – one that ended for them today and made those buying their stock in the last week VERY happy.

Approved in 2010, PANCREAZE is a pancreatic enzyme preparation consisting of pancrelipase, an extract derived from porcine pancreatic glands, as well as other enzyme classes, including porcine-derived lipases, proteases and amylases. The pancreatic enzymes in PANCREAZE act like digestive enzymes physiologically secreted by the pancreas.

For a lot of biotech companies, even the largest of the sector, any change on a medication can bring the long drawn out process and delayed gratification most smallcap investors are allergic to. Even changing labeling on a long standing product requires a deep government approval process, so a lot of investors will steer clear, for favour of companies that pivot and run (and sometimes fall) quickly in more volatile sectors.

Biotech companies tend to sit and drift, sometimes for months, sometimes years, while they work through their approval process. Weak hands fall away as other opportunities loom, the stock sinks lower over time as folks lose patience, but those with faith will either be rewarded with an eventual big payday, or an eventual implosion – there’s not a lot in the middle.

Vivus has other products, namely Qsymia, which helps folks with obesity, binge eating, and bulimia, and is in the midst of a turnaround program aimed at reducing debt and cleaning up the books. That’s all fine and good.

But what they’re showing the retail investor market right now is there’s life after cannabis, that a good turnaround story is worth following, and that there’s gold in science as well as them thar hills.