Xphyto (XPHY.C) blowing the weed sector out of the water with true 2.0 plan 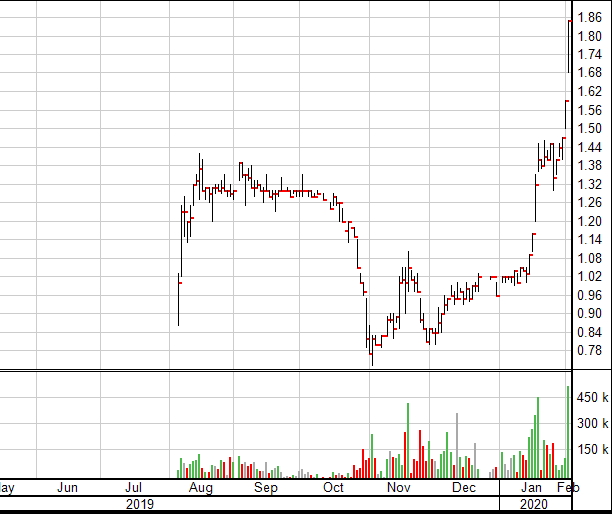 Xphyto (XPHY.C) is dominating the cannabis sector like Sean Kemp used to dominate the Seattle buffet scene. It’s a legit beast right now, jumping from fat new high to fat new high. We’ve sat with their team several times over the past year and on each occasion have been impressed with their plans, but perhaps the greatest plan they’ve executed has been achieved over the past month, when their share price has elevated from $1.00 to $1.85.

What’s more impressive is, three months ago, you could have had them for $0.73.

That sort of lift has been all but unheard of on the cannabis scene over the last year, at least without some sort of mammoth news announcement. But XPHY hasn’t had a gamechanging news drop. Rather, they’ve done it with… the work.

The first time I heard Xphyto pitched it was known by many as ‘The Bunker,’ a reference to a huge German World War II bunker that was being repurposed for weed growing. The pitch came with many pictures of humongous safe doors and concrete and a pitchman who looked and sounded like one of Hans Gruber’s men locking down the Nakatomi Tower as a barefoot Bruce Willis ‘welcomed them to the party, pal.’

But the bunker quickly appeared to be the wrong thing at the wrong time, at least if the Canadian cannabis experience was anything to go by.

I mean, why grow weed when you can just import it, and be assured a profitable arrangement?

Xphyto Therapeutics Corp. has signed a three-year definitive supply, import and distribution agreement with Pharmacielo Ltd. […] Xphyto has prioritized near-term revenue generation by way of import and distribution of medical cannabis products into Germany as a key corporate initiative for 2020 and beyond. Pursuant to the agreement and subject to all necessary regulatory approvals, Xphyto plans to commence the commercial import of cannabis oils and isolates in mid-2020 with a three-year minimum sales target of approximately 30,000 kilograms for a full range of extracted products including 99 per cent pure cannabidiol and THC (tetrahydrocannbinol) isolates, broad spectrum CBD oils, and full spectrum THC oils.

It’s a gimme. Pharmacielo grows it cheaper in Colombia than Canadians can, and Xphyto has import agreements in Germany. Boomshanka.

Through its wholly owned German subsidiary, Vektor Pharma TF GmbH, Xphyto holds a number of German narcotics permits, including a commercial cannabis import licence. The company intends to import and distribute cannabis flower, isolates and derivative products in Germany and the European Union, beginning in Q1 2020.

The deal to bring Vektor in house was announced a few months earlier at a very reasonable cost of around 1 million Euros in stock, and comes with some interesting technology:

“…with vape-based delivery systems now associated with significant potential health risks, XPhyto is extremely pleased to combine assets and expertise with Vektor, a specialist in thin-film drug delivery systems. XPhyto is well positioned to capitalize on the next generation of cannabis investment opportunities, primarily clinical validation of safe and effective medicine and emerging European markets.”

This is all very cut and dried, no pun intended.

Pharmacielo has the high quality product, done dirt cheap. Xphyto has the import license in Germany, the government of which covers the cost of weed for medical patients. Vektor can turn the Colombian CBD into thin strip products, the likes of which have been long promised in North America but, for some unknown reason (*cough*CoreOneLabs*cough*), remain largely unstocked in dispensaries.

Added to that, Pharmacielo wants in on both sides of the deal.

Pursuant to the agreement, Pharmacielo has agreed to purchase, on a private placement basis, the principal amount of $500,000 of unsecured convertible debentures of the company and 500,000 common share purchase warrants. The debentures will bear interest from the date of issuance at a rate of 8.0 per cent per annum, payable semi-annually, and will mature on the date that is two years from the date of issuance. The debentures will be convertible at the option of the holder into 500,000 common shares of the company at any time prior to maturity.

What’s even more interesting to me is that the front runner moving into the German market, that being several of Canada’s licensed producers, managed to squib their shots and disappoint the Germans, sending them ditchweed that put a serious drag on the German rollout. The opportunity for Xphyto is to step in where the Aurora Cannabis’ of the world screwed up, and have a large part of Europe to themselves.

I’ve got no horse in this race – Xphyto took flighto without most people noticing, including myself. But after today’s big spike, and the day before’s big spike, you’ve got to think the word will be out soon and this thing might have some more flying to do.

FULL DISCLOSURE: Not a client.