On January 28, 2020 Equinox Gold (EQX.T) and Leagold Mining (LMC.T) announced that 99.88% of all shareholders voted to approve a merger between the two mid-tier gold companies.

To put that in perspective, if the shareholders of EQX and LMC filled every seat in GM Place, and Frank Guistra shouted: “All those in favour of this merger raise your hand!” – there would be a total of 19 people with their hands resting on their laps.

You could take the all the merger-naysayers out to Tim Hortons without monopolizing the seating area.

Not since a basement-full-of-stoned-frat-boys were asked, “Anyone in the mood for Nachos & Cheese?”, has a question elicited such a confluence of positivity.

Leagold owns four operating gold mines in Mexico and Brazil, along with a near-term gold mine restart project in Brazil and an expansion project at the Los Filos mine complex in Mexico.

The two companies have a similar cost and production profile. During the first three quarters of 2019, Equinox produced 115,000 ounces of gold at an all-in sustaining cost of USD $983/oz, while Leagold produced 281,000 ounces at USD $978.

Together, they are valued at $1.7 billion. 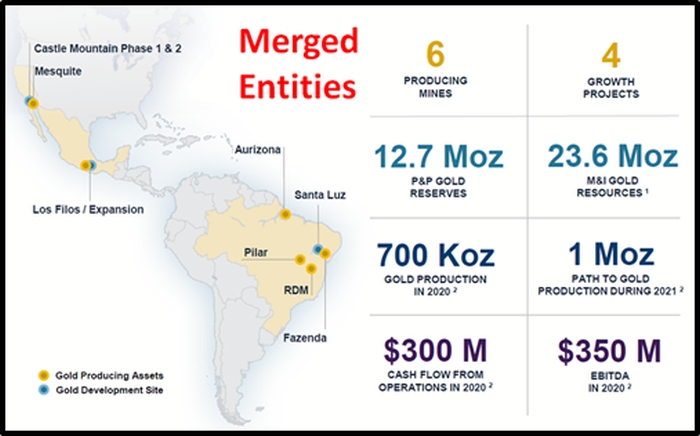 History proves that mergers can create synergy. Example: Disney and Pixar combined their creative talents to produce WALL-E, Brave, Inside Out and Frozen the fifth-highest grossing movie ever.

That didn’t happen in this case.

Both Leagold and Equinox are up about 25% since the merger proposal was announced on December 15, 2019 (bullion is also up 6% in this time frame).

The combined entity will continue operations as Equinox Gold and be headquartered in Vancouver, Canada.

“The mines acquired are far from the lowest cost operations,” observed National Bank analyst John Sclodnick, but “the acquisition will increase Equinox’s leverage to the gold price.” 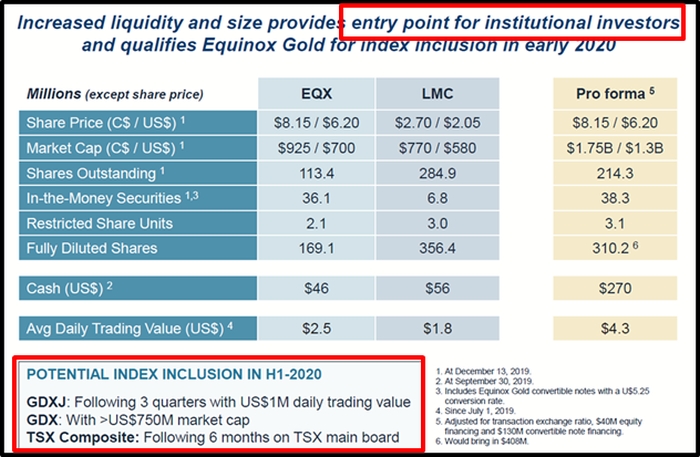 “This merger will create one of the world’s largest gold companies operating entirely in the Americas,” confirmed Beaty, “This is the kind of gold company investors want today.”

Beaty – who has “been nicknamed the ‘broken-slot’ machine for his knack of consistently making his investors rich” – is 100% correct.

Yes, the merger is projected to create “operating and administrative synergies” worth about $10 million a year, but that’s a drop in the bucket – gold companies are notoriously inefficient.

“There’s no magic to one million ounces, it’s just a number,” Beaty told analysts, “But it represents scale – and scale really does matter.”

NEM is projected to produce 6.5 million ounces of gold annually over the next ten years in the Americas, Australia and Ghana. 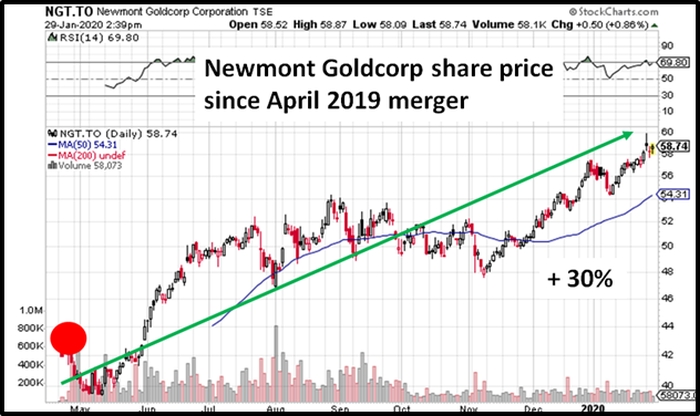 “We are delivering on a promise we made to shareholders when we launched Leagold three years ago,” stated founder Frank Guistra, “I will be stepping down as Chairman and Director to focus on my global philanthropic work but will remain an enthusiastic shareholder.”

“The merger and acquisition activity we witnessed over the past year demonstrates a growing appetite by gold Producers’—predators if you will—to devour smaller, resource-rich quarry,” wrote Equity Guru’s Greg Nolan, in a recent article about sub-$100 million juniors.

The Leagold/Equinox merger is expected to close in February, 2020 subject to regulatory approvals from the TSX, the NYSE.

“What you want to always end up with is 1 + 1 = 3,” Beaty told the Financial Post, “We think we’re doing that by having a larger company that will attract new investors.”