I love it when a plan comes together. I especially love it when so-called ‘analysts’ who move furniture for a living and buy stock in amounts so low the broker commission turns their profits to losses, come at me with teeth bared, claiming my picks are awful, right before the stock I’m talking about lights up.

Welcome to chapter 974 in that story, sub-titled “Else Nutrition (BABY.V) eats the doubters for breakfast.”

Yeah it does. They’re called performance warrants. You should analyse more if you’re going to pretend to be an analyst. pic.twitter.com/DeAae2ZUWK

This smear job, and those who repeated it without question, managed to compel one seller to dump their BABY stock at a time when volume was low, drilling it from $0.50 to $0.35, according to information I’ve heard from two insiders.

The company, admittedly, struggled to push past that low priced level for a while, even touching the low $0.20’s as the company rolled through a slow news cycle.

The news has since been rolling, and so has the stock. The last week of price jumps have been filthy, especially if you listened to us and had faith in our words when the stock was being poleaxed. 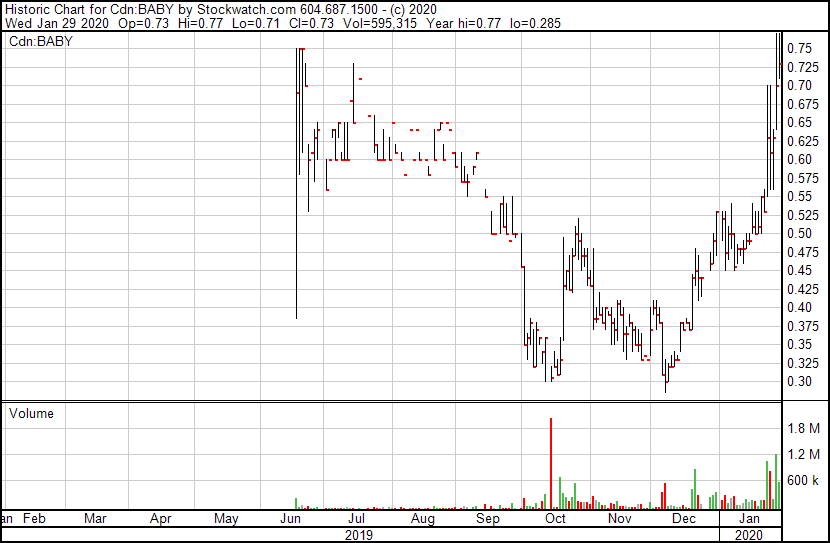 Everybody loves a loud party, and the Else party is so freaking loud right now it’s getting complaints from the neighbours.

What the company does is cure a problem a LOT of us have had – that of how to provide a finnicky baby with a formula nutrition product that closely mimics breast milk, without the nasty chemicals most baby formulas rely on.

If you’ve never had a kid, this will elicit a shrug from you. But if you’ve had one, especially one that is having trouble latching, or chews, or is getting too much flow, or has allergies, you’ve lived through a crisis period that no existing product helps mitigate.

From my earlier piece – Beyond Boobs:

Here’s what it doesn’t have:

It imitates the composition of breast milk, with a full amino acid profile, identical fatty acid profile ratio, and the exact macronutrient ratio of protein, carbs, and fat that you’d get from mom.

Beyond that, it tastes good enough that it could be consumed by adults, in the same way Pedialyte helps hydrate dehydrated kids but also lends itself to adult use. This will be important later on.

To date, Else hasn’t yet got to the meat of their plan, that being a roll-out of their product in North America, though that’s planned for the second half of 2020. Some food regulatory work needs to be done yet, which is fair when you’re talking about a product for babies, but the company did just hit a major milestone – the delivery of new patents for their technology, which add to the existing worldwide patents.

October 2019, one month after the smear job:

Mexico is the latest country to provide a notice of allowance prior to granting the patent (September, 2019);

“The EAS infant formula team has confirmed that Else toddler formula intended to be marketed in the U.S. meets the regulatory requirements for general food as required for a toddler formula,” stated Dr. Fabiana Bar-Yoseph, Else’s director of clinical development, regulatory and scientific affairs. She added, “This regulatory validation marks a significant step as we look to bring a nutritious, plant-based toddler formula to the U.S. market.”

Then there’s more patents, aimed at the adult use market in Eurasia, which speaks to potential down-line growth:

And more, with the US patent office following suit just days ago:

The extension addresses the use of the company’s proprietary formula for adults who have specific malnutrition-related conditions such as lean body mass and declining basal metabolic rates. The patented composition provides the necessary proteins, amino-acids and other nutrients needed in a single food serving.

The risks attached to an early stage food company are that the product tastes awful (I tasted it at a conference several months ago and it’s fine), that it will have a terrible texture (it doesn’t), that it will contain chemicals that folks will object to (it doesn’t – everything in the product is plant-based), and that someone else will imitate the product and wipe out your market (which is where those patents come in handy).

The biggest risk is whether or not the market wants your product.

Else Nutrition concluded a comprehensive U.S. customer study, conducted by Wizer, a leading market research provider. The study assessed the perceptions, needs and behaviour of parents/caregivers regarding their children’s nutrition, and their response to Else Nutrition product concept. The Web-based survey of over 1,858 prospective customers (who are the primary decision makers regarding household grocery purchases) spanned 13 major U.S. metropolitan areas, including New York, Los Angeles, Chicago, Boston, Washington, D.C., Philadelphia, Miami, San Francisco, San Diego, Seattle, and Portland, Ore. All surveyed have a child between the ages of three months to three years of age.

The key findings showed that:

Imagine if 40% of bread consumers were allergic, sensitive, and intolerant of traditional bread, and you had the only patent on a bread product that fixes all of those issues at once. That’d probably be a hot ticket.

With so many people having been attracted to Beyond Meat (BYND.Q) and similar alternate food offerings in the last year, there’s a real shift afoot in the consumer packaged goods sector, right as Else is hitting its stride.

And I’m talking about it not because they’re a client, but because it’s necessary for what Else has created to exist in the world, so that hundreds of millions can take their kids off trashy formula products.

My personal purchase of stock in this company feels great not just because it’s nigh tripled in value, but because the world will be better for it.