When a stock that couldn’t get arrested for most of the last year suddenly nearly doubles in a single day, you’d expect to find some sort of paper trail that would point to why.

Nope. Not a whole lot of shorts out there at 5c.

I thought something was up on Tuesday when I saw the 885k share buy at 3:59 and now today’s 1.1 million buys in a 15 minute span. I’m thinking some news was leaked. $SAFE

As good a theory as any.

To be clear, SAFE has been very undervalued for quite some time. Central to their problems for the last year has been a deal they did bringing on an acquisition in an all-stock deal. The target was good, the price was fine, but the paper was free trading.

CEO Thomas Gerstenecker confided in me some months ago that it was a rookie mistake for the company not to tie the stock up, and that as soon as it landed as part of the deal, that stock started being blown out.

“In a situation like that, there’s not much you can do,” he told me. “You can fight it, try to keep the stock up with buying and promotion, but then you’re just rewarding the person dumping. You can try to find a cross but it’s a lot of stock to cross. Really, you just have to wait for it to end and make sure you’re doing good business in the meantime.” 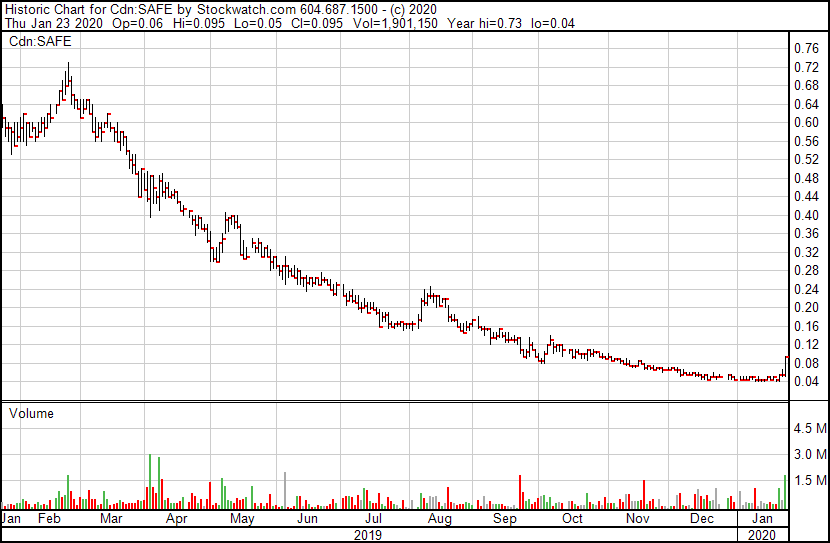 Gerstenecker has done good business in the meantime, including signing deals with over 60 LPs and provincial distribution networks, but it has never been respected by the market, which just grew used to good news being sold into over time.

Check the last financials if you don’t believe me:

When the rot first began to set in, a lot of naysayers wondered if secure transport and handling of LP product could even be a scale-able business in North America. Part of the reason for that is, a lot of 3 Sixty Secure clients don’t want their relationship to be blurted out to the world, reasoning it might make robberies easier to plan.

But those in the LP world, many of whom work with the company, know they provide a valuable service, and that service, at a low market cap, may be a valuable acquisition target.

So if someone was planning to snap up 360 Secure, and was gobbling it up quickly on the market until folks noticed, it would look kind of like what it looks like right now.

I’m not telling you to buy SAFE – anything that goes up that hard can come down the same way. But a LOT of people I know have been watching this stock for a while, waiting for it to get cheap enough that it was a gimme.

It would appear maybe we’ve hit that level.

Keep a close eye out. The halt the company is under currently is ‘pending company contact’, which should indicate the feds want to know what’s happening. The company may not know.

FULL DISCLOSURE: 3 Sixty secure has been a client of Equity.Guru previously.