If Equity.Guru had a wall of shame in our fine sea foam blue offices, Namaste would be on it, along with Wayland Group (WAYL.C), CEN Biotech (FITX), MedMen (MMEN.C), St Jean Carbon (SJL.V), Imagination Park (IP.C), Affinor Growers (AFI.C), Abattis Bioceuticals (ATT.C), CUV Ventures/RevoluGroup (REVO.V), and a host of others that we went to war against at one time or another.

On every front, we were proved right over time, and then some. But Namaste is presenting a conundrum…

It’s not as shit as it was.

Don’t shoot the messenger, man, but I’ve been saying for a few months now that Namaste, despite having to spend months cleaning up the dog crap left around the joint by previous CEO Sean “Man-bun” Dollinger, is actually in a decent position as the cannabis industry self destructs around it.

While Namaste under Dollinger spent a lot of money on non-assets, nurse parties, and buying things from its CEO (or selling things to its CEO), it also has a fat lump of cash that it raised at a bubble high, that still exists and, increasingly, looks like fuel for an acquisition run.

In addition, the company has a 49% stake in chocolatier Choklat, which recently received a license to process cannabis edible products.

This deal wasn’t really important until very recently when it became clear Canadian LPs are god damned awful at making chocolate – so awful that chocolate edibles are sitting unsold on shelves.

It’s a blob of gross chocolate.

Yup same here. Our gummies sold out within like 20 mins of us putting them out, still tons of chocolate left. Especially dark lol

I get the impression some of the chocolate available is akin to melted chocolate chips with a bit of weed.

If I’m paying $10 for a piece of chocolate it had better be high end.

Edibles are presenting a problem for several producers.

Canopy had to pull back on its beverage plans because they weren’t happy with the quality of their products.

This despite being at it for several years.

“Right now, none of the chocolate or gummy bears or beverages can be prepared or sold, but we’re doing experiments on how to make them,” says CEO of Canopy Growth https://t.co/3RlAfTz2SV @leahmariehansen

I’m not about to sit here and tell you Namaste is a solid, or even decent, place to put your investment dollar, chocolate expertise or not. For mine, they still have a lot of work to do to show they have a cohesive plan and the pieces to make it work, and the oversight necessary to ensure no repeat of their earlier nigh collapse.

But, while nobody gave a shit about the Choklat deal when it was made, now, with some of the bigger players flubbing their sweet shots, having a a true chocolate maker on board and seeing it get its license has to present an interesting talking point. 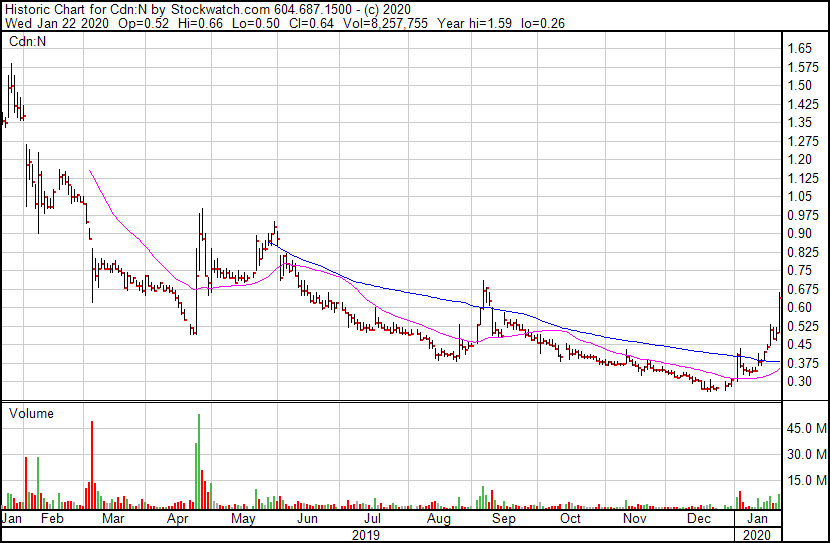 A double at this point in the cycle is nothing to sneeze at. Respect for the rebuild thus far.

FULL DISCLOSURE: No commercial connection at all. Just giving credit where it’s due, same as we scythe bad players down when it’s due