This was no ordinary tech soiree, there were representatives of some seriously large partner companies, potential clients, and folks who AMPD would love to hire one day. I’d list the names of those huge companies, but don’t want to get in the way of AMPD doing business with them, but if you figured one or two rhymed with Schmelus, Schmicrosoft, and Schmoeing, you’re hitting close to the mark.

Yours truly was there and the shindig was an undeniable success. I’ve been to a lot of these events and they’re often timewasters. A hastily rigged VR platform in one corner, a beer sponsor, and a vegetable tray from Save On describes half of the tech events I’ve ever attended.

But at AMPD’s big party, one thing was present that changed the tone; AMPD CEO, Anthony Brown.

When I went on my scheduled facility tour, I was one of 8 folks in the group, which I was told was about the max permitted. When Brown hosted his tour after mine, we nearly got trampled for the 30 or so following in his wake, listening to his anecdotes and jokes, getting a 101 college equivalency course on latency and virtualized data service layers and how his High Performance Computing (HPC) setup is cheaper, faster, and stickier than the one-size-fits-all cloud solutions we’re all used to from the giants.

A summary for those whose eyes just crossed:

Big companies have a wide variety of needs for heavy computing power. Some do big jobs in one fell swoop, some do lots of little jobs, some have petabytes of data to move to their machines and some need machines ready when called on, set up with specific tools in advance. If you’re handling a machine learning project or an augmented reality game or processing video to be projected on cinema screens forty feet high, you need servers that are specifically primed to handle your job.

This is not how most of the internet works. If you sign up for a cloud server account with Amazon Web Services, or Microsoft Azure, or Google, you get a self serve account, a handful of tools they’ll allow on their network, a system that shares your job across maybe thousands of servers that you’ll share with others, and which you might occasionally lose access to if someone else is jamming the works. If you’re trying to render terrabytes of high definition video for a TV series, or you’re hosting a video game that’s about to launch wide, or you have a research project that will involve so much data it would take two years to upload it all to AWS, the internet as it currently stands is not designed for you.

So you’d usually go to a high end server service that might be half a continent away, or build your own servers on your own premises, and hire a bunch of guys to handle that, and then you have to set up the tools and handle maintenance downtime and backups and pay fat power bills and fight off hackers and… well, it’s just not acceptable that this massive global computing network hasn’t kept pace with what we use it for.

So AMPD is there to do things differently. With their recent agreement to supply computing power to Bardel Entertainment, as an example, the animators of TV and movies such as Rick and Morty, Teenage Mutant Ninja Turtles, Puss in Boots, and Magic: The Gathering, AMPD is literally connecting their studio to the DC1 facility directly, with a fat fibreoptic pipe between the buildings, and setting up banks of servers with exactly their setup and tools that they’ll pay to use exclusively.

Obviously this requires a lot of computing power, and electricity, and that’s both expensive and environmentally problematic. The fact that the DC1 facility makes clean drinking water from its cooling units, and uses the heat created to warm surrounding buildings makes these issues far less important, and brings the whole exercise far closer to carbon neutral than any competing server farm.

At some 200 kilowatts of potential power draw, that’s important. DC3, already in planning, is primed for 3 gigawatts.

That’s an extraordinary amount of computing power, with figures reminiscent of those we used to hear about from cryptominers back in the boom times. When those crypto miners became unprofitable, we heard a lot of talk about those companies turning into HPC data centres, and how they’d shift to video rendering and artificial intelligence and virtual reality hosting.

NOT ONE OF THEM DID.

But AMPD has plowed straight into those markets and actually brought down big clients.

So that’s what AMPD does, and it’s how it plans to compete with the large cloud server providers. While it’s true, a Google, Amazon or Microsoft could offer similar services and make life hard for AMPD due to their monster footprint, they’d actually be competing with themselves, and a one-size-fits-all product that suits 95% of the market just fine, thanks very much. AMPD plans to focus on the other 5%, which the big guys are more than happy to ignore, or shovel into systems that don’t really suit them but cost a lot in service and bandwidth fees.

Says the company this morning:

A number of as-yet-unannounced deals and partnerships are in progress. The company expects that deals under negotiation in the pipeline will, when finalized, max out DC1’s current capacity.

Though I can’t publish actual photos of the inside of the facility (even shots of what kind of servers are hooked up is apparently counter to client privacy agreements), but I can recreate what I saw using stock images from elsewhere.

A lot of this: 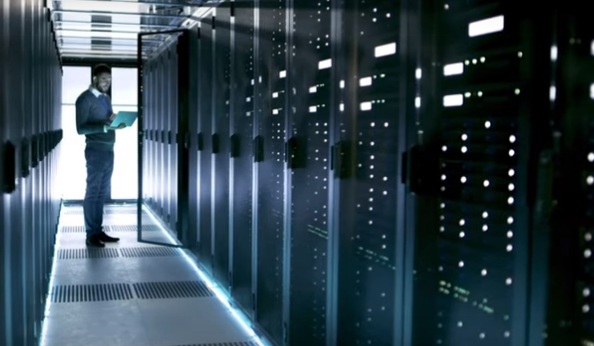 And a little of this: 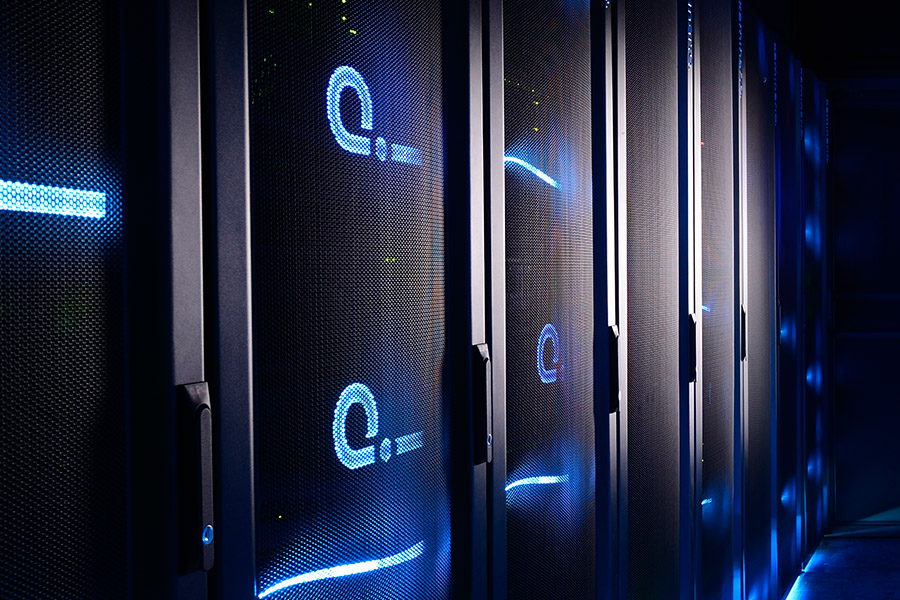 Saw a lot of this: 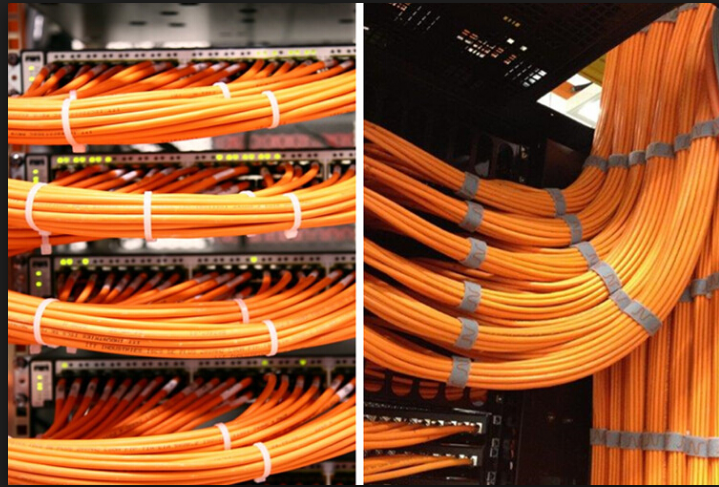 With higher levels of security than a lot of weed growing facilities I’ve seen, along with stand alone power supplies, backup generators, a stonking fat fire suppression system, and massive air conditioning units specifically designed to produce humidity (rather than limit it) and turn that into clean drinking water – and heat exchangers designed to supply heat to the surrounding building, this little pilot plant impressed all the right people.

“We definitely got what we hoped for out of the party,” Brown told me this morning, adding, “We had some very high level discussions with potential clients that will be game changers for us. With our raise done and enough cash to start doing key hires, we’re good to go.”

Regular readers will know I’ve been talking about AMPD for a long while now, going back to months before they were public. There’s no denying their short public life has had a little hair on it, with a quick double from $0.35 to $0.70 turned backwards by a large early stakeholder deciding to not just dump their allocation, but to short the company into that dumping, thereby making themselves a quick wedge while leaving everyone else involved in the deal not just poorer but answering angry phone calls from folks they brought along.

Nothing illegal about that. But it was certainly a bullshit move that has taken a good month to fight off, killing a great run in the process. Thankfully, AMPD has a lot of friends, and their faith is starting to be rewarded.

I own a lot of AMPD stock. While, traditionally, I talk about the companies I like and maybe buy a little stock if the market is right to do so, this time around I felt personally responsible for defending it, partly because I have a dog in the fight, but also because I’d talked it up for months, telling people how, with a low share count and the founders locking their stock up for some time, this would be a ‘clean go public’ by which others should be judged.

But as the shorts kicked in (at one point, AMPD was one of the most shorted stocks relative to its share count on the CSE), I made a decision not to try to convince you guys to buy in and fight them off. Rather, I opted to do so personally.

“Steer clear of the blast zone,” I said on social media, and this site. If unscrupulous players were going to dump stock, there was no point rewarding them for doing so until the stock reached actual lows. If we couldn’t have our clean start from the outset, we could at least have a clean restart once the dust had settled.

And if the shorts were going to get squeezed in a high risk game of chicken, it should be insiders who should go to battle and risk their capital, not retail investors.

With the help of brokers at Mackie, friendly early stage financiers, the company founders, and whatever chicken scratch I could get together, we took 3 million shares off the forces of evil over the last few weeks, and turned the stock chart green in doing so. 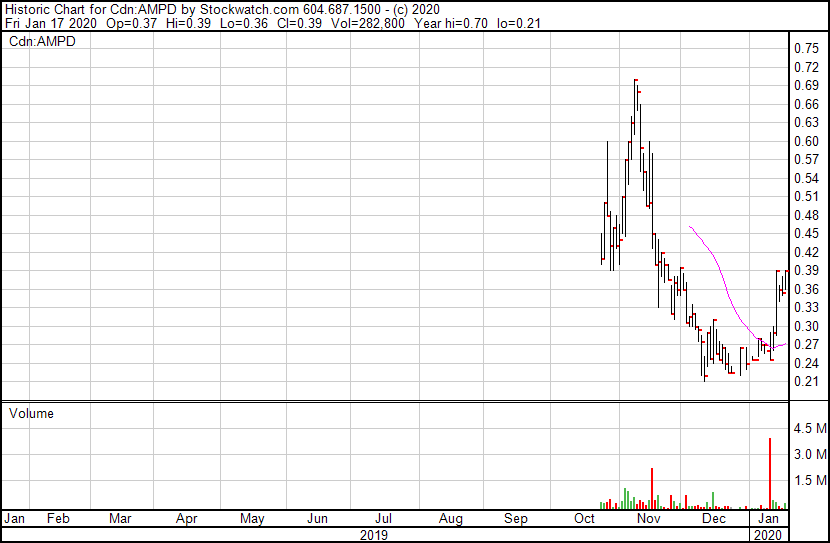 Through all of this, with a financing needed and their fate largely outside of their control, AMPD needed capital so they could hire and grow. But allowing the same people who’d screwed investors once to do so again, and now at a cheaper price, would have seen the same routine play out in four months time and put us right back where we were, so a small raise was done specifically for friends, family, founders, and the people who specifically defended AMPD in its hour of need, to get AMPD just enough dough to rev its engine.

Today, I can say AMPD has weathered the storm.

The stock grows more solid by the day, including a 9% jump the day after the launch party, and nearly a double since the $0.22 low. There are new faces at the pointy end, strong hands holding the stock, new customers being locked down, a functioning and launched data centre with those beautiful Kaminario systems that techies will tell you are the cream of the crop, and the short numbers are low enough that it’s safe to get back in the pool.

Whether you do or not is, as always, your call. But the time to consider it is now.

FULL DISCLOSURE: AMPD is not a commercial client of Equity.Guru, but we hold a significant stake in the company.