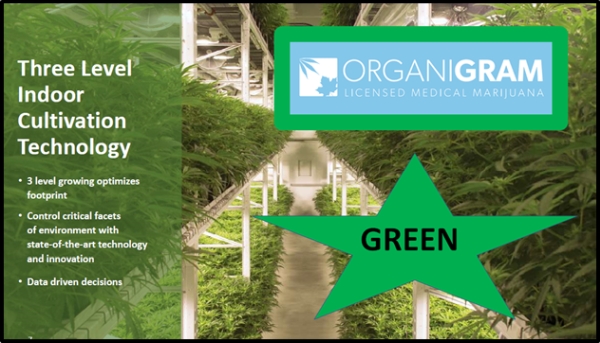 To be a shareholder in Hexo (HEXO.T) Aurora (ACB.T) or Organigram (OGI.T) over the last 8 months, is to gain intimacy with pain, humiliation and their kissing-cousin abject despair.

“Next stop $15.00,” predicted one HEXO shareholder last Spring (when it was trading at $11) “I just became a millionaire! Grandpa hitz the bong. Gunna shit myself hire a maid to wipe my butt crack. Have no fear.  HEXO is here!”

Then reality set it.

Hexo – along with Aurora and Organigram – and the whole cannabis sector – started to slide.  The exuberant early flood of financially-illiterate cannabis investors turned into a stampede of fear.

“I’ve bought this in high price now it’s very low,” complained one HEXO warrant holder on January 14, 2020, “when the expiry date comes – is the money will disappear [sic]? I feel I’ve got scammed.” 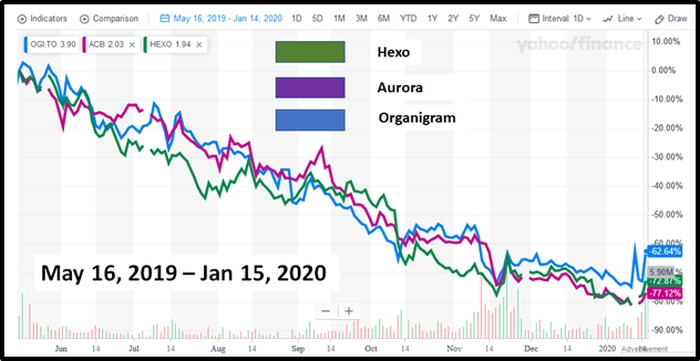 Today, January 15, 2020, shareholders of Hexo (HEXO.T) Aurora (ACB.T) and Organigram (OGI.T) – woke up and a saw a colour they almost did not recognise.

Brighter than brown, darker than yellow – like the leaves of a tree!

By mid morning, all three companies were surging.

“If these lucky charm eating bag-holders crying all the time did not make money just in the last two days, they should not be investing their lunch money in this sector,” stated one Hexo shareholder,

“The move on HEXO is mirrored across virtually every MJ stock,” observed another, “even ACB is up.  It appears MJ stocks are up on Organigram financial news.”

48 hours ago, the market waited with muted enthusiasm for Organigram’s Q1 earnings results – scheduled to go out Tuesday, January 14th, after market close.

Organigram posted net revenue of $25.2 million, for the quarter to end November, up from $12.4 million a year ago.

Organigram’s net loss from continuing operations was a (relatively modest) $900,000.

On a conference call with analysts, Organigram announced it is going to introduce cannabis-infused chocolates in Q2, and will start bulk sales to generate new revenue streams.

Late this morning, with studied gravitas, they announced that the revenue numbers were, “surprisingly encouraging”.

Then the CIBC analysts had another huddle.

Organigram will have “issues to contend with,” warned CIBC, “such as ongoing elevated capex spend and substantial working capital investments.  But the balance sheet is relatively strong and market share gains are encouraging.”

In fact, on January 15, 2020 there are political rumblings in the background that are bullish for cannabis companies operating south of the border.

The House Committee on Energy & Commerce is holding a hearing today on cannabis policies for the new decade, discussing six cannabis reform proposals, including two that would federally legalize marijuana.

“Millions of Americans—mostly black and brown—have been locked up for non-violent drug offenses,” stated Joe Kennedy III (D-MA), “Desperate parents are forced to turn to a black market with no concern for patient safety to get their children the relief that they need. Prohibition has clearly failed and America isn’t waiting for its government anymore.”

The American Civil Liberties Union report The War on Marijuana In Black and White concluded that “a black person is 3.73 times more likely to be arrested for marijuana possession than a white person, even though blacks and whites use marijuana at similar rates.”

Like women’s-right-to-vote and gay marriage – legal rec weed in the U.S. is coming sooner rather than later (the arguments against it are flimsy). 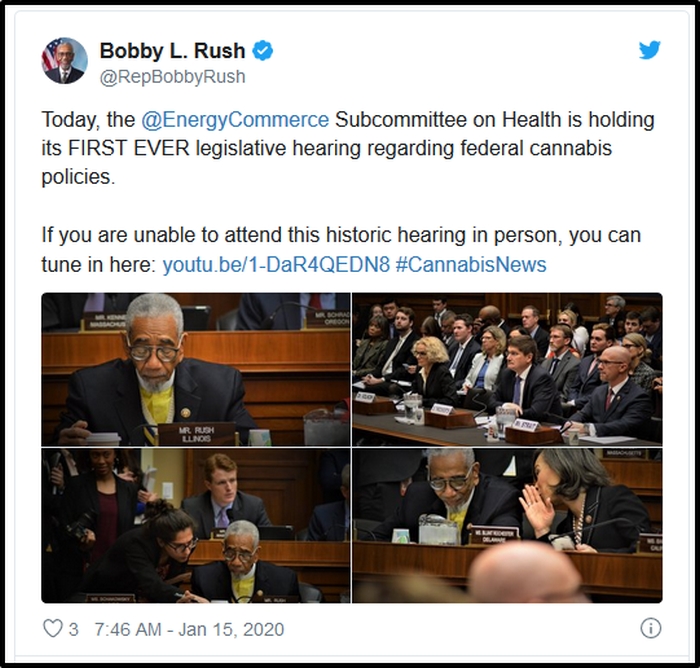 As a general rule, looking for financial insights on an investor bull-board is like trying to quench your thirst by licking a sidewalk in San Diego.

In this case, the street-level analysis is correct.

There is zero news coming out of HEXO and ACB – while OGI published a good set of numbers which is pulling other cannabis companies up.

That is basically what is happening here.

But given the last 8 months of constant gloom for cannabis investors, it’s understandable the first glimpse of green would inspire a mass tooting of kazoos.