Short of corporate malfeasance or continued terrible decision making over an extended period, a CEO change at a public company only happens when someone decides to retire, or fights with their board more than that board can tolerate. Even a decidedly middling CEO will usually be kept on rather than put everyone through a replacement search and ensuing stock price dip, because a middling CEO gets the job done and a new guy can bring unpredictability.

To investors this may seem odd, that the CEO of a big company isn’t a god but rather might be someone who, if they met them, we’d consider just an average guy and not a financial genius with MBAs shooting out of their ass. Investors, after all, trust CEOs with their life savings sometimes. We trust that they’ll be oracles, that they’ll make grand decisions that few could match, that they’ll lead us to the promised land, and that they’ll be worth the sometimes millions they’re paid.

When an unexpected CEO change happens, that mythology around the CEO means damage control is needed. We’ve all seen the ‘they’re pursuing other opportunities’ line or the ‘wants to spend more time with their children’ routine, designed to obfuscate the real reasons the ship has changed captains. Sometimes you’ll even get the ‘will stay on as a board member’ charade, which generally means they have three months to transition their replacement and has agreed not to rock the boat while they find another job.

Such lines fool nobody. I’ve got kids. I’d rather be CEO of a Fortune 500 company than play another evening of fucking Minecraft.

We hold the CEO in esteem usually but, the reality is, CEOs are pretty meh.

Just over a year ago, the man who held the purse strings at a private company outside San Francisco began negotiating a new employment contract with the executive who ran the day-to-day operations.

The company had recently turned around, thanks in part to the executive, and the company, understandably, wanted to keep him. It offered him a salary of almost $1 million a year, which it considered in line with the market.

The executive asked for almost $1.4 million. But the company wouldn’t budge. Its message was simple: We like you and we want you to stay, but that doesn’t mean you can name your salary.

The company mentioned in the story above was the Oakland Athletics and the executive was their 2005 manager, Ken Macha, who told the A’s he’d pass on their 50% pay rise offer and look for another team to manage if they couldn’t give him more than double what he’d earned getting them to the playoffs.

Most baseball teams give a successful manager whatever they want to avoid change, at least if things are going well. It keeps the fans happy, it brings predictability and calm, and they don’t have to find a replacement.

The A’s saw it differently: If they needed to find another good manager, they figured there were plenty of people out there who’d do it for near free. And if their manager wanted to go find another job, there were maybe two other teams out there hiring at the time – he was welcome to take his chances. That $400k was more important to them than the task of finding another guy who could come up with a baseball lineup and call steals.

Side note: Their bluff worked. Macha returned to the A’s inside a week and accepted much the same offer as the one he’d initially spurned.

In the corporate world, every new CEO is positioned to the public as an amazing leader of men that they’re lucky to have, a rock god with undeniable insight, and a work ethic that will create a juggernaut of industry.

The moves may not have been surprising in relation to market conditions, with both companies having suffered protracted stock price slumps over the past year, but what may be a surprise is that both moves seemed to come without a ready ‘market ready’ replacement.

While Moore certainly has a pedigree in other large corporations and has been a Supreme director for some time, his board has made clear his role is as an interim replacement, not a permanent one, and that a search for a new CEO has begun.

The company is in the process of engaging a leading, nationally recognized search firm to identify and evaluate a new CEO to lead Supreme Cannabis in its next phase of profitable, long-term growth.

Maybe Malnarich will stick around at the EXP helm, maybe not, but this sort of ‘we’re losing, sack the manager’ thinking is far more common in professional sports, where satisfying a rabid fanbase is sometimes the point of the exercise more than actually changing anything fundamental about the organization. In the public markets, things tend to be a lot more procedural than reactionary.

Why? Because nobody wants to show weakness.

Replacing a CEO with an interim CEO is a bad look. When it happens, it means something went badly/quickly wrong – or the board was looking for a human sacrifice.

In the case of Supreme Cannabis, what went wrong was not financial – the company has a big war chest still left over from two CEO’s ago, and is pretty darn close to break even. And the problems weren’t quality control or product driven; the company produces weed people seek out and that sells out fast.

No, Supreme has lost two CEOs now to placate the market, in the same way sports teams dump a good manager on a losing streak to placate fans and convince them they’re doing something different, even if they’re likely to replace that manager with a carbon copy of what they lost.

Experion’s Garnett is (and I say this from experience dealing with him) a brainy dude with a long term strategy and a tendency to get stuck in the weeds on small day-to-day stuff when the market was looking for ‘big picture’ concepts. He was also running a company tied in legal knots by founders who were lawsuit happy, insisting on receiving big money amounts the company claimed they weren’t owed. This happens more than you’d realize, and is usually quickly settled because actual lawsuits make investors uneasy. Garnett was determined to fight his because he was convinced it was the right thing for shareholders.

This past month, those lawsuits were either booted out by a judge or settled, and Garnett was out soon thereafter. One might wonder if the boss was less a problem, or if he was tossed like a Hail Mary pass thrown to the market by a board looking to reflect ‘a fresh start.’

CEOs are valuable, but not as valuable as you think.

Elon Musk’s annual compensation at Tesla, in 2018, was half a billion dollars. It’s arguable Elon is a man of vision, but if he were to go away, would Tesla suffer greatly?

Tilray (TLRY.Q) boss Brendan Kennedy got half of Elon’s pay scale – $256 million – in 2018, which was nearly twice what Disney CEO Bob Iger made. Can you name one move Kennedy’s made that brought anything to the company someone else wouldn’t have also brought?

Steve Jobs was the visionary in charge of Apple and an icon of business who became a household name arguably as important as the company he led, but when he died, did Apple go under?

Who is the CEO at Microsoft today? Or General Electric? Or Sony? Or Ford? If they were to retire tomorrow, would you short those companies?

Conventional wisdom says the biggest issue with Canadian cannabis companies right now is the search for a CEO who will turn the fortunes of a company around and have the market reward said company with massive stock price surges.

But consider Canopy Growth Corp (WEED.T) – stuck with an interim CEO for much of 2019, and a share price plunge that had taken them from a high of over $70 per share to $25 when major investor Constellation Brands (STZ.NYSE) stepped in and placed one of their biggest swinging dicks, David Klein, in the CEO seat.

At the time, December 9 2019, Canopy’s share price rose from $24 to $28, and was touted as the next great chapter of the company by bagholders. But in the time since, Canopy stock has dropped back to $25. 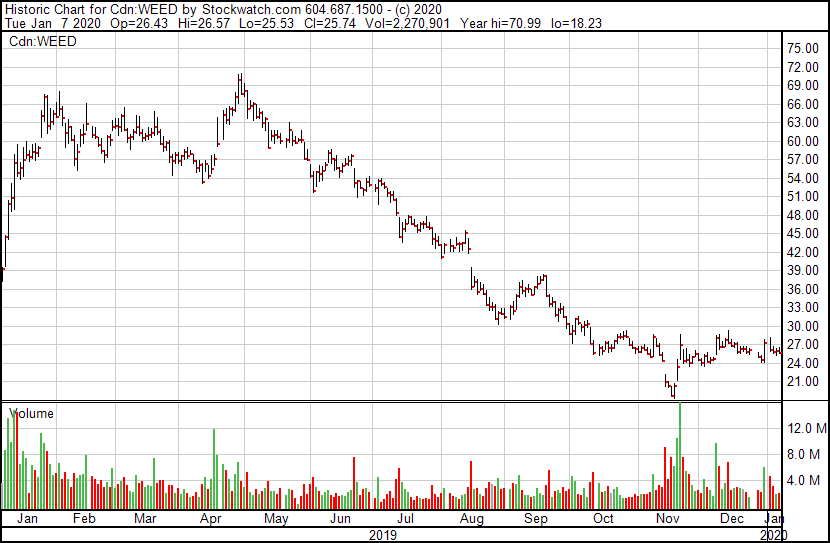 Was it worth it? If Canopy had held the line with interim superchief Mark Zekulin, maybe even given him the respect of making a position he’d held for months permanent, would Canopy stock be exactly where it is now?

Certainly letting their respective CEOs go didn’t do much for Supreme or Experion’s share price in the short term. In two days of trading since their announcements, EXP has held steady, Supreme is down a smidge. Mostly that’s because Garnett didn’t tie his company up in legal issues, and Dhaliwal didn’t raise money cheaply for Supreme four years ago and leave a bunch of cheap warrants out there to keep the share price down.

It’s also because, realistically, neither move matters. Folks are selling weed company stock not because of the CEO but because, by and large, cannabis is not a good business to be in when you can’t market your product legally, there are 200 competitor companies with grow licenses out there, and hardly any stores exist to actually sell your product in. As outdoor grows take hold and the inevitable third world export shift happens, things will only get harder.

And don’t even come at me with your cannabis 2.0 bullshit. Edibles and vapes have finally shown up in BC’s online cannabis store over the holiday break, but the legal edibles are so underwhelmingly weak, and offer such little variety, that few will try them for anything more than shits and giggles… and maybe not so many giggles. 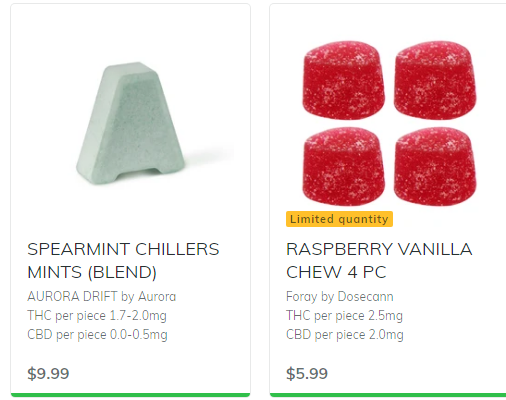 If I have to eat four mints to get any effect, why bother? This is what’s going to save Canopy?

My stance, and it’s one I’ll stand by to the end, is that we’re going to see a lot more CEOs cast adrift in the weeks ahead, and for not much good in return, considering the question of what well-intentioned, smart, ultra-qualified CEO will happily take over at a cannabis company when the whole damn industry is on its knees? The prospects on offer will either get paid far more than the usual, receive MedMen sized bonuses to sign on and stay on, or be those with few other career options.

Calling it: Supreme trades John Fowler and Nav Dhaliwal to Experion for Garnett and a player to be named later. Trade approved by the league office.

FULL DISCLOSURE: We’ve done business with both Supreme and Experion.