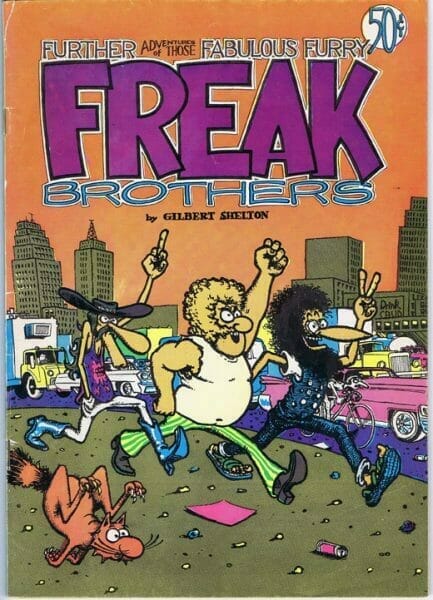 High Tide’s (HITI.C) brand tries to get its freak on with 20th century counterculture icon, but younger crowds left cold

Famous Brandz, one of High Tide’s (HITI.C) subsidiaries, signed into a royalty-based merchandising license with FFFB Media LLC to use The Fabulous Furry Freak Brothers trademarks, names, logos and artwork.

If you’re unfamiliar with the freak brothers you’re not alone. They were a little before my time too, but they were ’60’s and ’70’s era counterculture icons in a specific school of satirical protest comics called Underground Comix. The most well-known artist of this particular subgenre of comic is R.Crumb, who is best known for his Fritz the Cat series of comics and animated adult movie.

What it means for High Tide is a perfect branding tie-in to an existing counterculture icon, and a certain amount of diversification for their brand. Or at least that’s what they’re aiming for.

“High Tide’s industry-leading position in licensed product manufacturing and wholesale distribution is further strengthened by adding the Freak Brothers licence to our portfolio of celebrity brands, which includes but is not limited to Snoop Dogg Pounds, Cheech & Chong’s Up in Smoke, Trailer Park Boys, and Guns N’ Roses,” said Raj Grover, president and chief executive officer of High Tide.

The problem here has been stated earlier in the story: nobody knows who these guys are, except for maybe your dad and your grandpappy. If High Tide is looking to draw brand appeal, they’re going to have to go younger and more current. (Granted, this might change if the newly announced Fabulous Furry Freak Brothers television series announced earlier this year gets greenlit.) Some of their other choices may draw some cultural relevance: the Trailer Park Boys are the brand’s most recognizable property. He’s followed closely by Snoop Dogg, who is in a constant fight for relevance even though he’s more known for weed than music nowadays, except maybe as a ‘hip-hop pioneer’ that the newer generation pays lip service too without actually having heard any of his music. Oh, and that weird age-play romance he has with Martha Stewart.

Not my kink, although I bet Martha’s an absolute freak.

But Cheech and Chong? Guns N’ Roses? I get it.  Bad boys. Outliers. But most people are going to see Tommy Chong’s face and think about Hyde’s Dad on That 70’s Show instead of Up In Smoke. Not to mention GnR. Most millennials are more likely to steer away from anything to do with ‘problematic’ GnR than be seen buying something bearing their likeness. Regardless, whether or not it was a good idea, the Freak Brothers license grants Famous Brandz worldwide usage, manufacturing, advertising and selling rights to certain types of smoking accessories for two years.

And now for something completely different

It’s hard for companies to raise money nowadays—what with most cannabis companies in steady freefall. It’s not particularly surprising that lenders are a little reticent about helping companies raise cash.

Let’s look at Hide Tide over the past year: 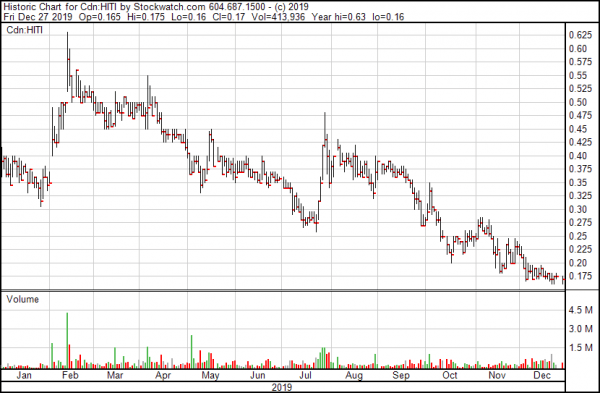 That’s about par for the course for most cannabis companies leading into 2020, though. So most companies are forced into issuing expensive, riskier convertible debentures.

Debentures operate like payday loans. You get your money, but it comes with nearly predatory high interest, and the expectation that you’re going to pay it back by a certain date. In this case, the interest is 10% per year. The company issued $2 million in unsecured convertible debentures under a third and final tranche of the private placement announced earlier this year. The amount is convertible at $0.252 per share with a due-date 24 months from issuance.

But along with issuing the debentures, the company paid the interest up front by diluting their stock to the tune of 1,142,857 shares.

A quick glance at their financial statements shows that the company had a cash position of nearly $2.5 million back in July, but that was likely gobbled quickly by the costs of expansion. There are a few items here worthy of note: this company’s assets, even with the $7.4 million allocated for “good will” are still considerably more than their liabilities. Almost double. But this most recent debenture issuance adds another $2 million onto a debenture-pricetag that reads over $21 million already.

We’re all drowning in debt right now, but our investments shouldn’t be.