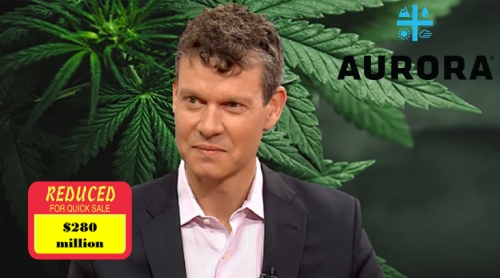 On December 23, 2019 Aurora Cannabis (ACB.T) share holders’ painful year (the stock is down 65%) got worse with the announcement that ACB Chief Corporate Officer (CCO), Cam Battley is leaving the company to explore other opportunities.

“Cam has been an integral part of the development, growth and expansion of Aurora,” stated Aurora CEO Terry Booth, “We are grateful for Cam’s leadership and passion.”

“Battley, along with former Canopy Growth (WEED.T) CEO Bruce Linton, were two of the most vocal and bullish cannabis executives,” stated The Financial Post, “frequently participating in media interviews and honing their commentary into easily digestible sound bites”. 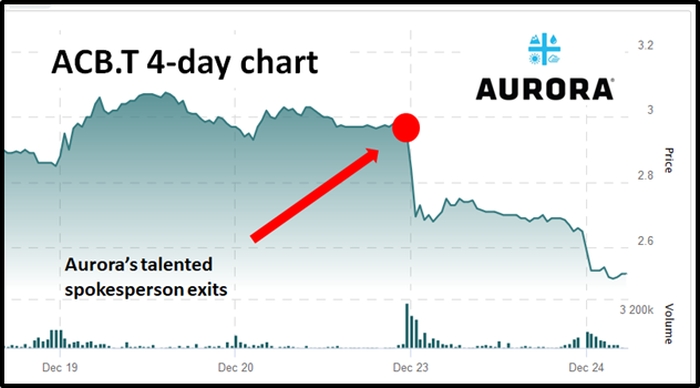 Battley’s bullishness on his company and the sector seldom wavered, despite waning investor sentiment for the industry during the past six months, and Aurora’s less-than-stellar financial performance in the past two quarters.

To conserve $200 million, Aurora recently announced that it was suspending operations at two massive greenhouses — one in Denmark, the other in Alberta.

“I wouldn’t say we expanded too quickly,” declared Battley with his trademark cool, “It will always be an advantage to be the world’s largest producer of quality cannabis, but a critical element to this is to hit that pause button when we need to, then hit play again when the time is right.”

Battley was promoted two years ago to be “the lead external-facing executive” at Aurora, “responsible for establishing and managing relationships with shareholders, industry analysts, news media, securities regulators, licensing bodies and governments.”

At the time, Mr. Battley, sat on the Board of Directors of the trade group, Cannabis Canada, he also had “15 years of experience in the global biopharmaceutical industry.”

The biopharmaceutical industry sells drugs extracted from biological sources including plants. The market is worth close to $1 trillion today, and – like the cannabis industry – involves liaising between government regulators, investors and the media.

In this environment, Battley stood out for his resemblance to a rational adult with relevant industry experience.

“I’m a suit and I didn’t come into the sector with a full appreciation of how right the activists were in what they did for cannabis,” Battley said in a 2018 interview, “We owe them a lot and we need to make sure there’s a role for them in the legal industry.”

This combination of self-depreciation and generosity made Battley a compelling interview subject.

Battley’s talent as a communicator was so extraordinary, that many investors began to view him a stock-picker.

They turned nasty when the ACB stock began to slide.

“More bullshit from Scam Battley avoiding to address the elephant in the room,” whined  the sub-literate Grumpy Pot Investor, “$ACB is a failure and its ur fault!”

“I believe Twitter was a major reason for @CamBattley being booted to the other side of planet earth,” wrote Scam Battley on twitter, “It was becoming too embarrassing for ACB to constantly be bombarded with gripes about Cam’s bullshit”.

“I warned everyone earlier this year about Aurora’s cash burn,” wrote Stockemups on an investor bull-board, “Now the CCO has bailed on the sinking ship.”

Yesterday, there were rumours on social media that the embattled CCO had been “physically confronted” at a recent MJ investor conference.

Disgruntled netizen @bearishbullz told Battley, via a tweet, that “you are screwed”. 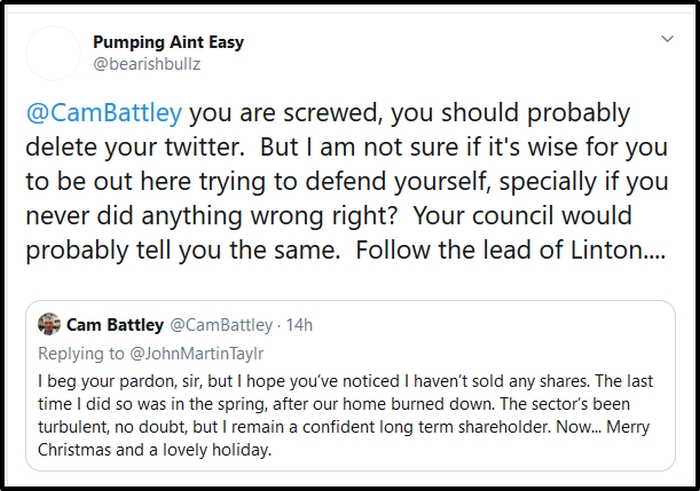 “We set out to be best-in-class cultivators,” stated Booth this summer, “Our success to date comes from a focus on quality, regulatory compliance and appropriate Board of Directors oversight.”

The Bank of America (BOC) warned its clients that ACB could run out of cash by Q1 2020. Other banks agree.

Today, on Christmas Eve, The Schall Law Firm, announced that it is investigating claims that ACB “issued false and/or misleading statements and/or failed to disclose information pertinent to investors”.  ACB shareholders who suffered loses in excess of $500,000 are invited to join the class action lawsuit.

Battley’s job was not to give stock advice.  His job was to tell the story of Aurora.  He did that consistently with class and skill.

The collective wisdom of the stock market valued his contribution at $280 million.

Given the fact that Battley didn’t create corporate strategy, negotiate financings or green-light acquisitions, that seems a little rich.

For Aurora, that story element is becoming more elusive.