Technology public markets newbie AMPD Ventures (AMPD.C) has had an interesting first 7 weeks on the market, initially doubling in value out of the gate, before profit taking and short selling drove it well down to 2/3 of its initial financing price in just as quick time. 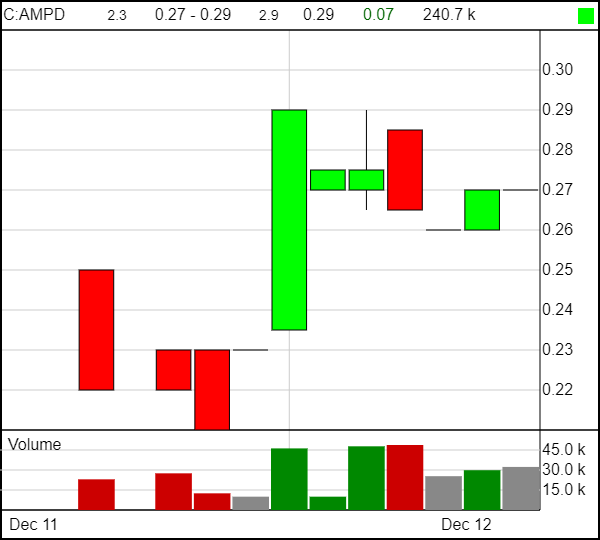 AMPD is in the business of high performance computing, the artisan end of the cloud computing world, where organizations have need for large amounts of computing time and power that don’t really work in a financially sound way on existing ‘one size fits all’ systems like Google and Amazon Web Services. They recently announced the opening of their DC1 HPC facility in Vancouver, which quickly attracted Bardel Entertainment, the animators of Rick and Morty, Magic: The Gathering, and Teenage Mutant Ninja Turtles into a multi-year deal. DC2’s buildout is now underway, and an LOI to acquire national brand, Cloud A, and its data centres and clients across the country has been announced.

AMPD’s most recent news was an announcement that they were doing a $2m financing at $0.40.

Having talked to several brokers connected to the deal, the suspicion has been the party pushing down AMPD stock was looking to get into that financing cheaper, reasoning the company might be in desperate need for the money and reprice down from the announced level.

That’s not happening. The company has decided instead to engage radio silence while the financing is open, and let the stock sort itself out.

Having some skin in the game, I’ve been watching the market closely to see exactly what was going down on a day to day basis, and it’s been interesting to say the least. Most trading days have seen an opening downtick, followed by a wall of asks and sometimes icebergs seemingly designed to prevent the possibility of the stock bouncing back. The end of the trading day would see another downtick, and any purchases the other way would be filled by icebergs.

For the uninitiated, an iceberg is when you see, for example, 5000 shares being offered at $0.28, and if you buy 10000 shares, that 5000 grows to accommodate your purchase, rather than ticking up to the next level of share price. There may be 50,000 shares sitting their waiting to be sold that you can’t see, which is kind of the opposite of a transparent market, but here we are, THANKS IIROC.

This morning, someone (or someones) with a fondness for AMPD opened the show with an uptick of their own, and pulled the routine used on the way down in reverse, setting up a wall of bids and taking down anything cheap going the other way.

The result was a monster up day ending with a detente at around $0.29, with opposing walls canceling each other out beyond that point.

All of this stuff is tiring. You’d love for a company to be able to just run (or otherwise) on the strength of its business model and not on whether someone has enough money to fuck with it all, but the penny stock business is high risk high reward precisely because this sort of background manipulation takes place.

When AMPD went public, it did so on the basis of a small raise done among a small group of investors and brokers, and with a tight share structure that would allow upward mobility to be rapid. The downside of that is, downward mobility can be just as rapid, and if one of a small group of shareholders opts to engage in shenanigans, it has an outsized effect.

I talked to CEO Anthony Brown about his raise, and he told me it’s for growth capital and if it takes a while to fill, that’s fine. “We’ll just grow slower, but we’re not going anywhere.”