Friday Recap: Job Reports for US and Canada 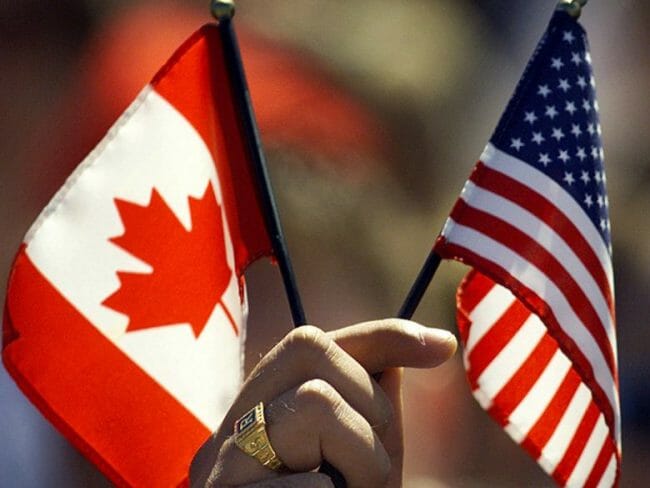 Jobs Are Here: US

Economic data about job gains was released this morning, and unemployment matched half-century lows. Markets chased fresh highs, reaffirming that the Fed’s decision to hold rates was a reasonable one.

Payrolls jumped 266,000, according to the Labor Department release. The unemployment rate dropped to 3.5%, matching the lowest since 1969, and private employment jumped by 254,000.

Despite strong numbers domestically, the demons behind the back of the US economy are trade uncertainty, and slowing global growth.

The devil is in the details, and 40,000 of the jobs added were from striking General Motors Co. workers coming back to work. Despite this, I think the numbers are fairly strong and have momentarily erased the street’s concern over a coming recession.

For the Fed, this means they are likely to hold rates steady, but then again, they can always change their mind to “insure” the global economy against risk. From a macro perspective, interest rates and the rate of inflation are often inversely related, which means the rise in one leads to a fall in other and vice versa. 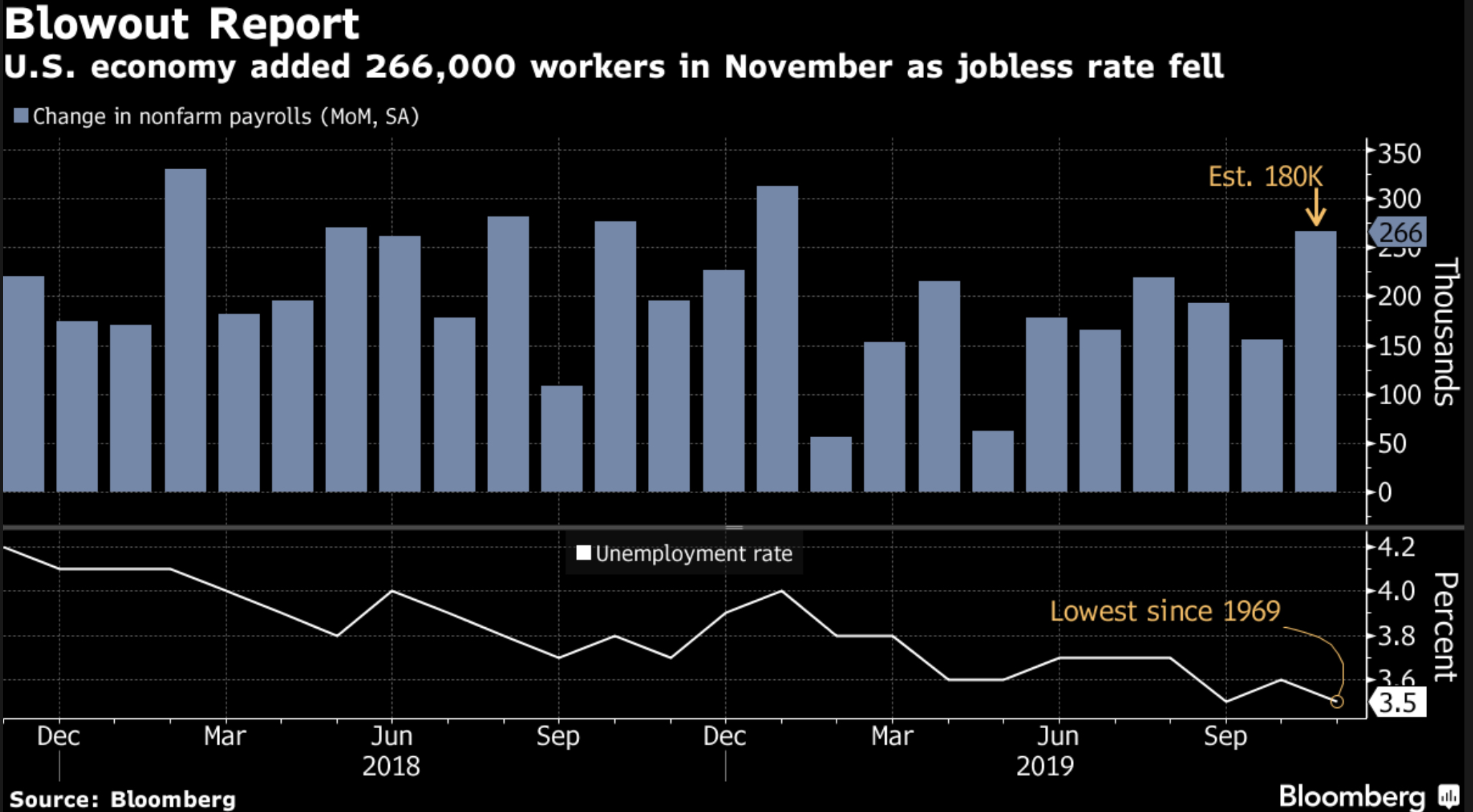 On any other day of the year, such a jobs report would’ve ideally urged the fed to start raising rates, but Powell has signalled a stronger desire to see inflation rise to, or hold at the Fed’s target of 2%.

“We would need to see a really significant move-up in inflation that’s persistent before we would consider raising rates,” Mr Powell said at a press conference in October.

While the US economy boasted strong numbers, Canada seems to be struggling in the midst of a global slowdown. Canada’s job market weakened for a second straight month, registering the biggest drop in employment since 2009 and setting up a test of the Bank of Canada’s resolve to hold off from lowering interest rates.

The Canadian Economy lost 71,200 jobs in November, which means the total number of jobs added this year is around 285,100. The unemployment rate increased to 5.9% in the month, from 5.5% in October.

As a result of this report, the Canadian dollar sank, which means there now lingers some doubt regarding the country’s domestic output. 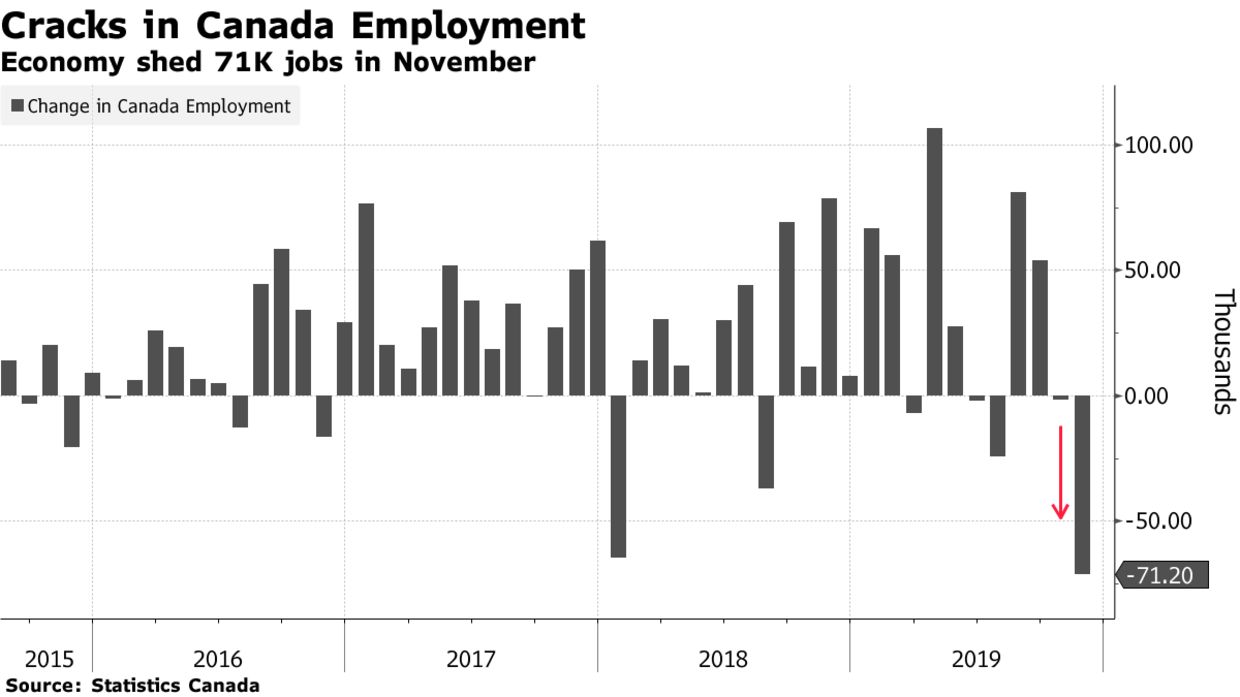 A few days ago we spoke of firms drawing down inventories as the cause of growth, and it seems like with fewer jobs on the table, consumers won’t be as likely to spend as well.

We spoke a few days ago about NYSE’s proposed plan to let companies raise capital via direct listings. The SEC verdict is out, and their answer is – “no”.

“We remain committed to evolving the direct-listing product,” an NYSE spokesman said. “This sort of action is not unusual in the filing process, and we will continue to work with the SEC on this initiative.”

Too bad for the exchange, there goes one way they could’ve made more money. But I think this news comes in as a sigh of relief to bankers, who still have a job to hold on to.

A lot many senior bankers are likely to tell you that the business isn’t as lucrative as what it used to be, and they would be right. With newer alternatives such as Direct Listings replacing the traditional IPO process, bankers have to fight for every cent on the dollar.

As far as the SEC is concerned, well, its a government organisation so it didn’t particularly feel the need to defend itself or provide an explanation. Which is fine? I guess? But I think it would’ve been nice to hear about why they thought it wasn’t a particularly good idea.

Allowing companies to raise capital via direct listings seems to be a generally nice thing to do, it eliminates fees making the process of capital raising cheaper for companies, and it opens the market to every investor as opposed to institutional money managers who get first dibs on the best deals.

However, it also makes the stock more liquid, which makes it more likely that speculation, pump and dump schemes, or some quant fund will have more opportunities to win, so I think there is some cost-benefit analysis that the SEC did to arrive at the said conclusion.