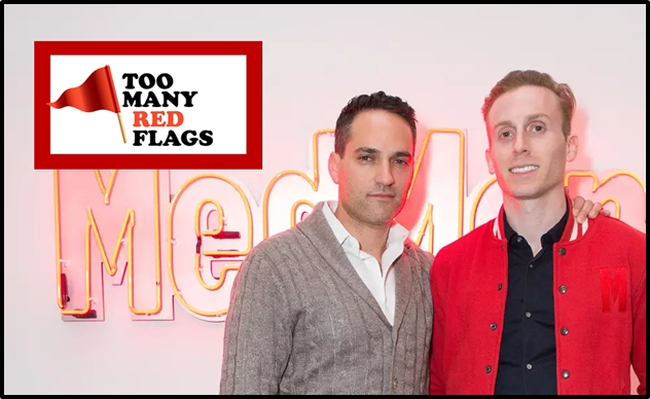 The stores have attractive exteriors, but the business inside is ugly.

“MedMen reported another quarter of heavy losses [In Q1, 2020] as the California-based cannabis company scrambles to right-size and avoid bankruptcy,” reported an excellent Grizzle article, “with $11 million of quarterly interest expense against only $22 million of gross profit and negative $30 million of cashflow, it’s only a matter of time before the bill will come due.”

“MedMen will limp along for another 6-12 months until they max out the borrowing base from Gotham Green,” continued Grizzle, “It’s possible they cut spending enough to make it to October, but with $77 million of debt due October 1st, that is likely when this sad story finally ends and investors are wiped out.”

In hindsight, were there warning signs?

And you didn’t need be a Chartered Financial Accountant to spot them.

All you had to do was scrutinise MedMen CEO Adam Bierman and President Andrew Modlin to know that your investment was in danger. 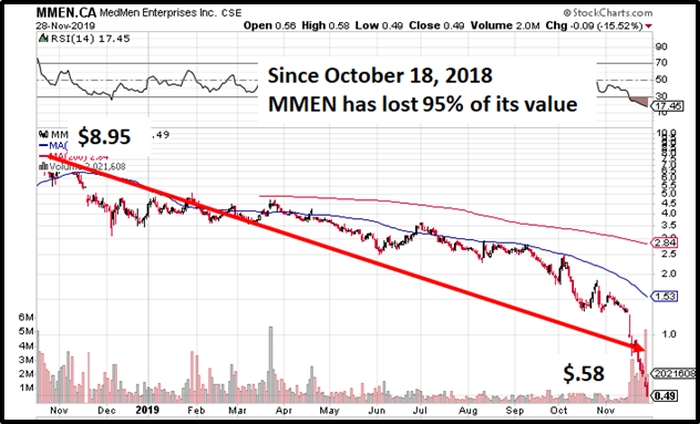 In 1973, a 23-year-old tone-deaf Richard Branson recorded Mike Oldfield’s Tubular Bells.  It became a #1 hit.  Virgin Records was born.  But this is an outlier. Inexperienced CEOs seldom grow an empire from a seed.

Andrew Modlin was an “oil painter turned brand designer” who later claimed that “MedMen is my canvas. This is the biggest art project of my life.”

Is it any surprise Bierman and Modlin didn’t know how to operate a $1 billion company?

Management should be able to articulate the operational mandate of the company without bursting into song, or paraphrasing a Hallmark card.

Warren Buffett helms a company worth half a trillion dollars. Asked for his business philosophy, he said: “It’s far better to buy a wonderful company at a fair price than a fair company at a wonderful price.”  That’s the closest Buffett gets to tooting his own horn.

“There is no reason we cannot be the biggest marijuana company on the planet,” Bierman bragged to the Rolling Stone, “I’m sitting with aces in the game of a lifetime. I’m not slowing down.”

“What sets us apart is a seamless integration of capital and operational expertise,” added Modlin, “There are a lot of people making bets in this space, we are making investments. And that’s what makes us proud.”

In the rough-and-tumble world of business, it’s normal to collect detractors and antagonists. [Editor’s note: MMEN once threatened to sue Equity Guru]

When that happens, you want allies (friendly surrogates) who will stand up and defend you.

In a bitter law suit, MMEN’s ex-CFO James Parker claimed that Bierman and Modlin called him “fat and sloppy”, a “pussy-bitch” and also referenced L.A. City Councilman Herb Wesson as a “midget negro” and a rep. of the Drug Policy Alliance as a “fat, black lesbian” and various female foes as “cunts.”

Nobody in Bierman and Modlin’s circle stepped forward and said, “That didn’t happen” or “that would be out of character for these two puppy dogs”.  In fact, more ex-partners sued them for immoral behavior.

In the Rolling Stone article, “Bierman called Parker’s claims ‘complete garbage,’ maintaining that Modlin is openly gay and that his wife is Latina, so accusations of bigotry don’t make sense.”

If you say so.

When almost everyone who comes in contact with you, finds you odious, that’s a red flag for investors.

It’s a fair assumption that management of publicly traded companies would like to get rich.

When you’ve founded a company, as Bierman and Modlin did, there is an opportunity to financially engineer the original paperwork to your advantage.  For instance, issuing yourself $.01 stock and then IPO-ing at .60 (so you are up 6,000% on Day 1).

This is commonplace; it barely warrants a mention.  But Bierman and Modlin’s self-dealing was so blatant it looked like a white-collar crime.

“The Canadian venture capital markets are a rank pit of vipers that live by sucking on the lifeblood of the foolish, recycling shit into prettier shit, and tapping grandma on the shoulder repeatedly for a financial refill,” stated Equity Guru’s Chris Parry, “But this MedMen (MMEN.C) deal is rank AF.”

President Andrew Modlin gets the same deal, so of the $100 million raised in new shares going public, $53 million of it goes straight into the pockets of the big two.”

In Q1, 2019, MedMen reported a net loss of $66.5 million. On p. 57 of the consolidated statements, it mentioned in passing that “Key Management Compensation” for the quarter was $21 million.

The sound of “oinking” coming from the c-suite is an investor warning.

When you’re running a young company that is hemorrhaging shareholders’ money, most key management would have the sense shop like normal people.

As Apple (AAPL.NASDAQ) gained traction in the 1990s, Steve Jobs purchased a modest house in Palo Alto with a “vegetable garden.”  Three years later, the rooms were still “sparsely decorated.”

Warren Buffet lives in a quiet neighborhood of Omaha, Nebraska in a house he purchased for $31,500 in 1958.  “I’m happy there,” Buffet told BBC, “I’d move if I thought I’d be happier someplace else.”

At a time when MedMen’s shareholders were bleeding, Andrew Modlin casually dropped $11 million on a “slick modern mansion in the Hollywood Hills”.

“The buyer is weed mogul Andrew Modlin,” confirmed Vanity Fair Magazine, “The house features a two-car garage discreetly hidden from sight of the front entryway, which opens to a breezy courtyard with a mature olive tree, a cactus garden, and a fire feature.”

“It just keeps losing money, more and more of it,” continued Parry, “and yet there’s no shortage of clueless rubes on Facebook leaving messages in investor forums asking, “Is there any downside in buying MedMen at these prices?”

The answer to that question turned out to be: yes.

There was more downside.

About 70% additional downside – it’s now trading at .59 – even though MedMen tried to stem the bleeding by firing 190 employees.

Getting blind-sided is part of being a small cap investor.

But in the case of MedMen, the red flags were there from Day 1.