How to profit from your own enslavement by technology: a guide for investors

Time for a less from the history of technology.

In 1096 AD, Pope Urban II took one look at a ‘crossbow’ and gave it the thumbs down for use on Christians. It wasn’t that the crossbow was a new invention either. It’d been around in one shape or form for hundreds of years, but the pope didn’t like it because it packed enough of a punch to penetrate chainmail. Granted, the longbow (which was much better at punching through chain—figuring that’s more or less what it was built for) hadn’t yet acquired widespread adoption, but the crossbow? Nah.

But look at that date. Urban II was the same pope who convened the council of Clermont, wherein he bid Christendom to answer the summons put forth by the emperor in Constantinople to help him with his “saracen” problem. So clearly, while the crossbow was “too pernicious” a weapon to be used against Christians, it would be perfectly fine against muslims. And it was broadly used during the crusades, which cut a broad and bloody swath through Europe and the Levant for the next few hundred years. Also, spoilers, it’s been used on Christians.

Now I know what you’re thinking—what’s he going on about now?

Well here it is.

“Part of our early evaluation process with customers is making sure that we’re on the same page for the usage of the robot. So upfront, we’re very clear with our customers that we don’t want the robot being used in a way that can physically harm somebody,” said Michael Perry, vice president of business development for Boston Dynamics.

And if that thing looks like a whole lotta nope to you, then you’re not alone. It’s not that it closely resembles the killing machine shown on that episode of Black Mirror (although it totally does), it’s that humanity isn’t ready for autonomous killing machines yet.

Here’s another tidbit from the history of technology, this one much more recent.

Nuclear fission of heavy elements was discovered in 1938 by German Otto Hahn and his assistant Fritz Strassmann. Without getting too deep into the science of it, we can safely say that it produces a lot more energy both as electromagnetic radiation and kinetic energy, which could therefore be harnessed and used for peaceful purposes.

We all know how that went. But what you might not know is that after the second world war unleashed the nuclear age, a scientist named Edward Teller came up with the brilliant notion of making those weapons powerful enough to destroy entire civilizations.

I’ll get to the point.

If there’s anything to be learned from the history of technology—from Pope Urban II’s selective prohibition of the crossbow to Edward Teller’s modifications to Oppenheimer’s fission bomb—it’s that any technology, regardless of official sanction, public opinion or common sense, has a condition that can be weaponized, will be, and then used indiscriminately on the people it was meant to protect.

To be clear, I’m not talking about autonomous robots waking up due to Elon Musk style paranoia about a technological singularity, but about our species’ propensity to take technology intended to enrich our lives and use it to kill or enslave others. But since nobody learns the lessons of history, we should face the facts that the weaponized robots are on their way.

“Right now, our primary interest is sending the robot into situations where you want to collect information in an environment where it’s too dangerous to send a person, but not actually physically interacting with the space,” Perry said.

To his credit, Perry doesn’t want Spot weaponized, but the precedent has already been set for killer robots: In 2016, Dallas police sent a bomb disposal robot wrapped in C4 to deal with a sniper that had already killed five police officers. But according to Peter Singer, author of Wired for War: The Robotics Revolution and Conflict in the 21st Century, they were copying a tactic that had been in use by the U.S. military in Iraq, which duct taped explosives to robots and sent them in after the enemy.

Let’s take this even further.

There’s a groundswell of support for the banning of autonomous killer robots spearheaded in 2012 by a group of NGO’s that called themselves the Campaign to Stop Killer Robots. Their sworn intent is to assist in retaining meaningful human control over the use of force.

But power is going to get what power wants, and no amount of resistance from below is going to dissuade it. If you’re somewhat cynical (as I am wont to be) then you’ve probably already shrugged your shoulders at the inevitability of the misuse of this technology and are now wondering how you can profit from it.

After all, weapons are big business: just as Lockheed Martin (LMT.NYSE). If the ass were to fall off every other market, companies like LMT would still go up, because there will always be a market for machines used to kill other people.

You can. The obvious companies are involved: Lockheed above, Boeing (BA.NYSE), BAE Systems (BA.LON), and Raytheon (RTN.NYSE), but if they’re out of your price-range and you’re looking for something with a bit more diversity than just guns and murder machines, you’re in luck.

There are plenty of companies involved in robotics for you to choose from, and while not all of them are manufacturing the means of our own enslavement or obliteration, many of them are doing some cool things.

NVIDIA introduced late in 2018 its Jetson AGX Xavier Module, a new chip the company is marketing as the brain for next-generation robots. it has more than nine billion transistors, delivers 32 deep learning TOPS, is 10 times more energy-efficient and 20 times more powerful than its predecessor, Jetson TX2.

NVIDIA said the module will enable robots to understand the world around them thanks to six high-performance processing units, including a 512-core NVIDIA Volta architecture Tensor Core GPU, an eight-core Carmel ARM64 CPU, a dual NVDLA deep learning accelerator, and image, vision, and video processors.

Great, the robots are learning.

FLIR Systems specializes in the design and production of thermal imaging cameras, components and imaging sensors. They’ve recently acquired Endeavor Robotics, the former private spinout from iRobot (IRBT.Q), which has delivered more than 7,000 robots to customers in over 55 countries, with broad use helping out with potential HAZMAT situations, and keeping troops, first responders and the public safe.

I’ll admit, it’s hard to find a negative with a company that’s building technology to help quadriplegics get up and mobile again—maybe they’ll add lasers or something later. All kidding aside, the $70,000 to $85,000 price tag on one of these rigs puts them out of reach of the average consumer.

This company is best known for the Roomba, which cleans your floors while keeping your pets entertained. We wrote about this company last week.

So there you have it. Human civilization hasn’t quite reached the all new low of letting technology do all of our fighting, thinking, and communicating for us, independent of our input, but give it time. If there’s anything we can learn about our own history, it’s that we’re bound to repeat it. 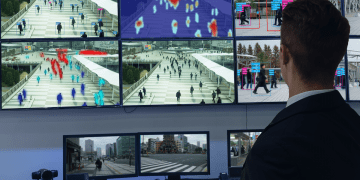