AMPD Ventures (AMPD.C) CEO Anthony Brown told a reporter yesterday he was looking to raise money for acquisitions and growth, with a $2 million raise announced a few days ago. Nothing weird about that. What was maybe a little weird was the flex Brown was pulling in the announcing of that financing.

With his stock heading south behind a sustained short seller attack, Brown didn’t flinch, and instead set his financing at a premium of 25% above his then $0.32 and dropping share price.

One of the largest net increase in short position was $AMPD 🤔

That had some observers scratching their heads. Was the $0.40 financing a rookie CEO move? Would a repricing be needed? What if the shorts kept shorting?

What followed showed strength, both from the perspective of a CEO facing public markets challenges for the first time, and from those of us who like this company and consider the present $13 million market cap to be just too cheap to pass up. 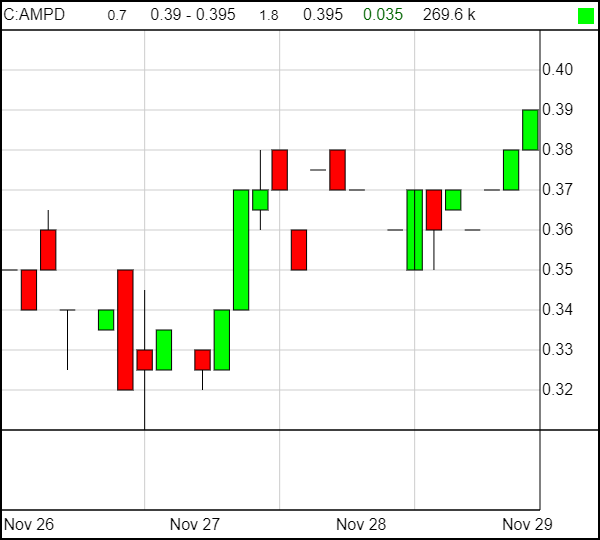 What you’re looking at in the chart above is not investing and not trading, but maneuvering. One side is trying to beat the stock down, shorting just enough to tick the stock downwards a cent or so at the beginning and end of each day to panic retail investors, while the other side is buying just enough to put it back and squeeze those shorters where it hurts.

I know this because part of that buying was from Equity.Guru, and all week long we watched every cheap purchase we made be counteracted by a cheap sell. An increment up, an increment down. Stacked bids facing off against stacked asks. Icebergs and crosses and last minute downticks raged.

It was expensive and intense and a distraction.

So why get engaged in a fight like this? Several reasons.

First, I like AMPD a lot. I informally advised the company in its march to going public and I like and trust the people involved. I like the business model, their experience, that they didn’t come public with a stupid valuation, that they kept the share structure tight, and that they’re not selling their own stock until they’ve changed the world.

Second, when you see someone short your deal and you know they’ve got it wrong, that they’ve come at it because they assume any deal that touches e-sports is bullshit, or because it’s new and vulnerable, or they see that tight share structure as being a means for an exaggerated downward move, buying into their short presents a real opportunity, if you have enough folks on your side.

That big short has to be covered at some point.

Trading is now over for the week and the company, and its brokers, will no doubt be working to fill that raise ASAP, so it can be closed quickly and the squeeze can really take hold.

Of course, these shenanigans, which moved AMPD up among the highest volume traders on the CSE, are a distraction for a company that has other things on its mind than what some douchelord is doing at his Bloomberg terminal and how some other douchelord with a copy of WordPress is responding.

The little guys, the potential investor base, which will eventually be the group that makes or breaks any public company, get the vapours when they see this kind of weirdness. Ideally you want a company stock to elevate based on operational success, or fall based on evidence they’ve had none. Wild and unpredictable swings on no news bring an aura of risk, and nobody likes risk in their portfolio.

Realistically, if the ‘players’ got out of the way, we’d all be better off.

But when those players start their campaigns of jiggeryfuckery, a strong CEO who is prepared to set his financing 25% above war time levels, and who has enough believers behind him that, by the end of the week, the stocks sits right at that financing pricing level, is what you want to see as a retail investor. It brings trust that your team will not go quietly into the night, that it will not become just another fucked-with junior penny stock that had promise but couldn’t quite get there, and that the prevailing management policy is not ‘keep your head down til the dust settles’ but ‘let slip the dogs of war.’

This week, AMPD drew a line in the sand BEHIND the enemy, and then shoved them the fuck back over it.

So I leave you to ponder over the weekend this simple question: If one of the bigger increases in net short position on the exchange is covered next week, if the company fills its raise and acquires something, and if all that defensive buying becomes offensive buying going forward… what happens then?

FULL DISCLOSURE: We out here buying the shit out of AMPD, which is not an Equity.Guru marketing client.