Yeah we lost money, what’s it to you? 1933 Industries (TGIF.C) takes the transparent route and we love it

Regular readers will know I’ve been a little quiet of late on the cannabis space, which is by design. If I’m not going in full welly on a given sector or company, I’m certainly not going to suggest you should, and quite frankly the cannabis business was overdue for a reckoning, as I stated back in February.

But understanding the flow of the tides is important for any captain, and the cannabis tides are trying real hard to turn right now. As an example, the Bank of America went public a week back with their theory that the worst was over and it was time to get back in on cannabis.

Bank of America wants you to know the worst is over on potstocks.
Ask them who they’re financing, and why not.
They’re selling you stock they need to get rid of, beloved. Don’t take the bait.

Weed stocks have had a decent enough week in the time since but I maintain that comes to an end in the coming weeks as tax loss selling takes hold.

Which means, even if you like it, don’t put a ring on it.

I like 1933 Industries (TGIF.C), but I’m not going to put a ring on it tonight, for the reasons outlined above. 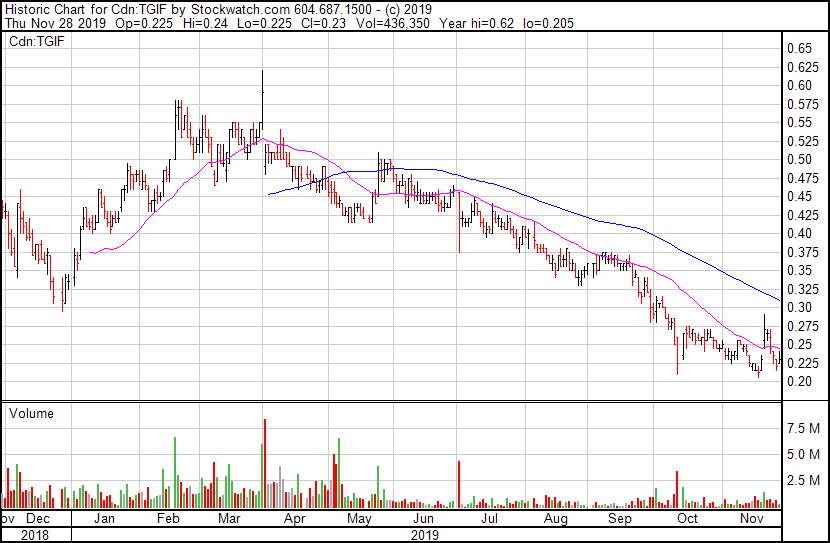 There are people who will have bought in at $0.50 and are now looking at a halfsies loss, and will be thinking about their taxes and how taking that loss by selling their stock will offset the gains they made elsewhere.

And that’s fair. That’s how you manage wealth (or otherwise).

What it means for me, however, is when January 1 hits, I’m cracking open my Scrooge McDuck vault and taking all those cheap yummies with the cash I’ve been sitting on for nearly a year now, since ‘get out of weed’ day.

1933 Industries isn’t profitable, but I’m not bothered by that in the long term. In fact, I see that as a means of getting a bargain, because others are going to see their quarterly loss and look no further. “Ermagherd, they lost money Sell!”

Here’s the thing with a loss; they’re not all created equal.

You can look at Canopy Growth Corp’s (WEED.T) loss from two quarters ago, where they copped to over $1 billion in the red, and that sounds like a protoMadMaxian hellscape where bears and spiders mate and the progeny hunts us for sport.

Or, you understand a bunch of that was around warrants and writedowns and, in actuality, points to work being done that will (eventually) bring that company under financial control… in a year or three.

When MedMen (MMEN.C) loses money, it does so owing a lot more money, forking out a lot of what’s left to its top execs, sacking people in every department but those top execs, borrowing more money to keep the lights on for another quarter, and having already sold its real estate to get to this janky point.

On the other hand, when Supreme Cannabis (FIRE.T) loses money, it does so building out its grow facilities, establishing a strong reputation for quality, and taking a ‘build it as you need it’ approach that has saved them from the sort of gigantic financial squeeze seen almost everywhere else. I can live with that loss, especially since the company is sitting on an unspent war chest that gets it through to late next year or beyond even if every single thing they do stands as it is.

At 1933 Industries, there’s also a loss I can live with because of much the same reasons.

TGIF’s financials came out literally as I was five paragraphs into writing this piece, and they show a $19 million net loss for the year.

They didn’t point to a quarterly loss with a smaller number and try to sneak on through. They didn’t gussy it up. No, they just ‘sent it.’

In fact, as if to echo that, when I contacted IR to ask a few questions about the financials while I was writing this, this is what they sent back:

Here’s the quarter compared to the previous 2:

That highlighted bit around Net Loss?

THEY HIGHLIGHTED THAT BIT, NOT ME.

I didn’t ask for info on the quarterly loss, they just sent it that way.

When I asked them to explain the loss in more detail, they were happy to.

“We are spending cash on growing our operations and have over 100+ SKUs with market acceptance,” said Alexia Helgason from the company. “And we added new licensing agreements to carry more brands [..] We have cash in the bank, growing revenues without any new expansion included, and we have infrastructure expansion that should get us the necessary biomass for our products going forward.”

Their news release noted the following:

The Company saw a decrease in gross margin from $6.4 million to $5.3 million primarily due to increased purchases by AMA of third-party biomass to produce concentrates and final products. The Company anticipates producing sufficient amounts of biomass from its new facility thereby reducing third party purchases, which is expected to significantly improve the realized gross margins.

Chris Rebentisch, Chief Executive Officer of the company said, “Our second year of operations was met by a surge in market volatility, challenging capital markets and a changing regulatory environment. Although not immune to sector-wide stock pressures and volatility, the Company remains positioned with growth and profitability in mind and we continue on target on this path. We are razor-focused on continuing to ensure the long-term viability of the Company. We have implemented cost cutting measures aimed at reducing our current operating expenses, improving efficiencies and strengthening our product offerings while building a sustainable foundation.”

You know what you’re looking at here, people?

That’s what you’re seeing, is adults. They’re building a business how you build a business. Raise money, spend it on things that bring more money, cut your losses when things aren’t going how you want them to, take those losses on the chin, learn from them, adjust accordingly, keep some safety money on the side, communicate clearly, and build build build.

But I’m not buying the stock today, nor tomorrow. I’m thinking there’ll be some selling tomorrow from folks who only read headlines or take their calls to action from strangers on the internet, then some dust settling, then some ups and downs and then TAX LOSS SEASON, which won’t be kind to anyone.

1933 is going to take its licks through that period.

The thing is, however, that if the share price drops, it doesn’t kill them. They don’t need to raise money for a year or so at this rate, so a short term slump on the stock is something they can endure. Which is why they’re being honest with folks, and up front, and explaining every part of their business (honestly, go look at the news release, it’s in depth).

And when that stock drop comes, it’s my signal to start consuming stock and stashing it away like a squirrel at a nut farm.

1933 are treating you like adults, they’re respecting you, being honest with you, explaining the plan to you, showing you their work, and making no bizarro ‘take over the world’ promises, not hiding a damn thing, not dodging a question, not making excuses.

And if you can’t separate that from the legion of others who bury their losses and treat you like idiots, then idiots you may be.

FULL DISCLOSURE: 1933 Industries is an Equity.Guru marketing client, and the author may, at any time, buy that cheap stock and giggle as he does so because, come on.