The firm reported third-quarter earnings today that beat estimates for earnings per share, but fell short of meeting the street’s revenue expectations. Here are the stats:

Shares traded down in aftermarket trading as the firm cut its FY2020 sales forecast. It’s not that surprising because if a firm is reducing its own expectations about how it might perform in the coming year, investors are less likely to invest in the company.

I also think that the firm is in an increasingly competitive market where you have better, cheaper, and more efficient technology that users don’t feel like replacing every other year. Apple’s lineup of the new 16-inch MacBook Pro has already fixed major user complaints, and the firm has set itself up nicely with new iPhones and AirPods Pro before the holiday season.

When it comes to windows machines, users are opting for Microsoft made products such as the Surface and the Surface Pro lineup that is bringing elite performance.

Dell’s other line of business provides storage and infrastructure computing solutions to clients and also faces competition from cloud computing giants like Amazon, Microsoft, and Google. In an increasingly competitive marketplace, the future is bleak if you aren’t at least as good as your competitors.

Strong earnings from BestBuy pushed markets to a new high as a strong outlook for retail is indicative of an economy with healthy consumer spending. Here are the stats:

“Our teams delivered another strong quarter of top- and bottom-line growth,” CEO Corie Barry said in the earnings release. “We are delivering on our purpose to enrich lives through technology by providing customers with the products and solutions they want and need, combined with fast and convenient fulfilment.”

This piece of news stands in stark contrast to what we saw from Dell. Both firms beat earnings estimates and changed their outcome for the coming year. Where one was not so sure about how it might perform next year, the other was certainly optimistic.

The result: markets priced in this information well before next year, far ahead of actual results.

Early indicators of China’s economic performance show a continued slowdown in November. Economic growth is the lowest it’s been in the last three decades and data around trade, sales, and price indices is not reflecting optimism.

Profits at Chinese industrial firms fell the most on record in October, dropping 9.9% from a year ago, data from the National Bureau of Statistics showed Wednesday. The decline in prices at the factory gate is one of the factors undercutting those profits and is expected to continue in November, according to a Bloomberg tracker of producer prices. 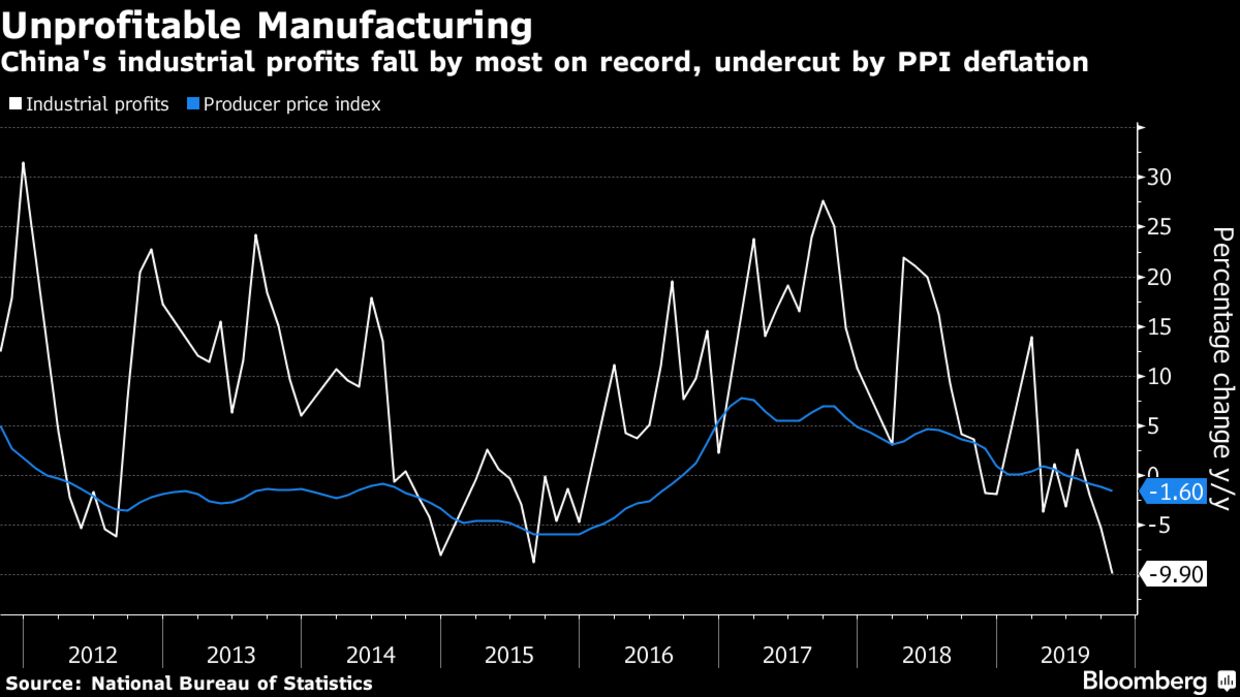 It seems like Trump’s trade war worked? It is a well-established fact that China is an ideological opponent of the US, although it has strong ties with the nation as a trading partner. The justification for mutual harm through tariffs was that it hurt both nations, but the US was a much stronger economy and was able to stomach losses for longer, leading China to suffer more.

Dec. 15 is a crucial date for the country because a failure to reach a Phase One Deal will mean more tariffs for a nation that is already bleeding.