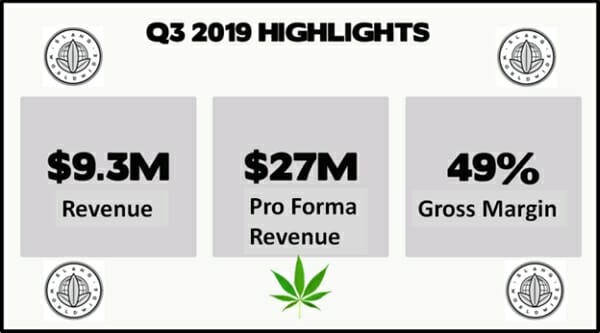 On November 26, 2019 Slang Worldwide (SLNG.C) announced that it has filed its financial results for the three and nine months ended Sept. 30, 2019.

Slang also released details of a $15 million raise through a non-brokered private placement.

“They’ve won 40+ Cannabis Cups, they have over a million followers on social media,” continued Parry, “and SLANG raised $66 million in its go public financing – despite only seeking $50 million – at a time when EVERYONE is hurting on the finance front.”

Miller breaks down the company’s ambitions in the following video.

Q3 2019 revenue of $9.3 million represents a shift in product mix toward higher margin premium products in the SLANG portfolio.

“In Q3 2019, we continued to see strong organic revenue growth,” stated Miller in the November 26, 2019 press release, “Across our portfolio, we saw favourable developments, including a shift in consumer spending toward the premium end of our portfolio, particularly Craft Reserve and Firefly.”

Slang has $10.6 million of cash and cash equivalents at the end of the quarter.  The war chest will expand through a $15 million private placement.

Investors include existing institutional shareholders and an additional investment by investor Bruce Linton.

Slang will issue 30,922,579 units at a price of $0.49 per Unit. Each Unit is comes with a warrant entitling the holder to purchase one Common Share for five years at an exercise price of $0.52.

If Slang trades higher than $1.50 for a period of 30 consecutive days, it can accelerate the exercise of the Warrants. Should all of the Warrants be exercised, it will generate an additional $16 million in cash.

Slang entered Florida with the RESERVE line of vaporizer cartridges through a partnership with Trulieve Cannabis.

Expanded potential reach of the SLANG Network to the European Union with an announced partnership with Global Cannabis (Greece).

Launched the Firefly Mini in select retailers throughout Colorado.

Began strategic partnership with Cookies, a leading California-based cannabis and lifestyle brand, to bring Cookies’ products to the Colorado market in early 2020.

Streamlined marketing, finance, legal, and operations functions, which is expected to generate $3 million in savings, accelerating the path to profitability.

2,600+ retail stores across 12 states selling SLANG’s branded products – SLANG continues to maintain an extensive distribution network which spans the US and abroad. 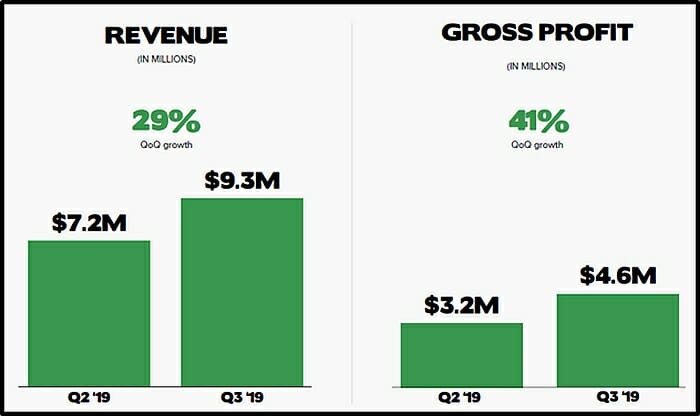 Slang expects to release branded flower and pre-rolls in Colorado and California by Q2 2020. The flower segment accounts for about 40% to 50% of retail sales in these markets.

As SLANG continues to expand the distribution footprint and contents of its portfolio of products, the company is poised for organic growth as regulatory headwinds and a changing capital environment create greater opportunities to build market share.

Several of SLANG’s existing key US markets are expected to mature in FY2020, including Florida and Oklahoma. In emerging markets such as Michigan and Massachusetts, Slang is positioned to make a quick entry should market dynamics shift favourably. The above markets represent well over $1 billion in potential sales.

Internationally, SLANG is well-positioned for early market adoption through its previously announced proposed partnerships in Latin America, the EU, and in Canada through its minority ownership of the Canadian Licensed Producer Agripharm.

The November 26, 2019 2,600-word press release contains detailed statistics, and a complete explanation of the company’s activities and ambitions.