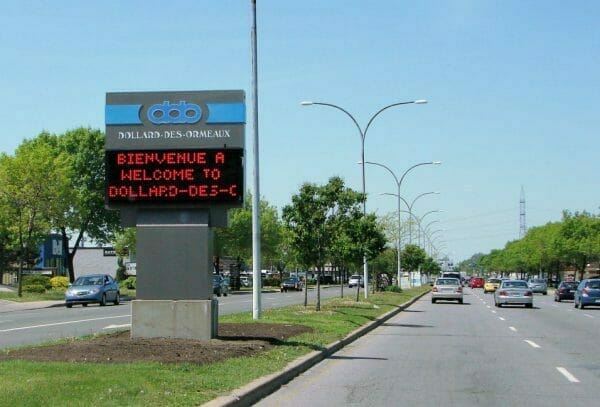 It’s intended primarily for research and development and pilot-scale laboratories, and compromises 43,000 square feet of production and packaging space. The facility will be making Pivot branded value-added CBD and nutraceutical consumer products, with production to start in the next three months after they get their license from Health Canada.

“This facility will enable us to launch our product pipeline in the Canadian market and thus further consolidating Pivot’s strategic positioning with ramping sales of specialty CBD products and micronutrient formulations in Germany and planned product launches in the U.S. marketplace in Q1 2020,” said Dr. Toni Rinow, chief executive officer of Pivot.

By all evidence Dollard-des-Ormeaux, Quebec, could be a stand-in for small-town Canada. The average age, according to Stats Canada, for men and women is between 40-42, with their kids coming in a close second. It’s the kind of place where bleary-eyed parents crowd into the local Tim Hortons so they get a little perk on the way to their kids 4 a.m. morning skate before their 6:30 a.m. hockey practice and then for school by nine.

It’s recent choice to make the town more accessible to folks with disabilities suggests a wide compassionate streak, and their brief flirtation from 2002 to 2006 with being coupled and then de-coupled with the nearby City of Montreal speaks of a small-town with its own character and opinions, which may not match those of the largest metropolitan city in the province. It’s bilingual, but unlike most of Quebec, largely anglophone.

If all of this sounds pleasantly boring, then that’s the way it should be. There’s no hidden diabolical plot here. No addicts roaming the streets of small-town Dollard-des-Ormeaux, high on the devil’s lettuce. We’re a little more than a year into cannabis legalization and the country hasn’t descended into a cannabis-smoke funk.

This is the kind of small-town where a cannabis company could thrive. Their attitude towards cannabis has generally followed national trends. When cannabis was legalized, and government’s started slapping public-smoking restrictions on it concurrent with what was already on the books for cigarettes, Dollard-des-Ormeaux followed suit.

Why tell the story of blink-and-you-miss-it small-town Canada? Because there are still 43 American states where cannabis is still illegal. The move towards legalization is strong—if we’re being fair we should recognize that many of these states have decriminalized cannabis use—but there are still some states in the southern United States with retrograde attitudes.

From a sociological point of view, the Canadian cannabis experiment has been a success. Now Canada is on the verge of ushering in a new wave of cannabis products, this time fielding THC and CBD infused edibles and beverages. For their part in this, Pivot is close to completing their production facility and preparing to submit their site evidence package to Health Canada, which will be the final step towards securing their license. The infrastructure will be dedicated to producing Pivot’s phytocannabinoid and micronutrient product lines using Pivot’s drug delivery technologies.

It will provide alternative sources of employment to the people of Dollard-des-Ormeaux, who a quick jaunt through the want ads on indeed.ca indicate have the same options as most Canadians: service sector if they want to stay home, government jobs if they’re sufficiently educated (and know someone, and don’t mind going to Montreal) and light manufacturing. Basically, Tim Hortons, retail, government of Montreal or Quebec jobs or stocking shelves at the local Walmart. Cannabis jobs, like Pivot, offer a better option.

The cannabis experiment hasn’t exactly been a financial success, though, and that is a mixture of greed, ignorance and stupidity. 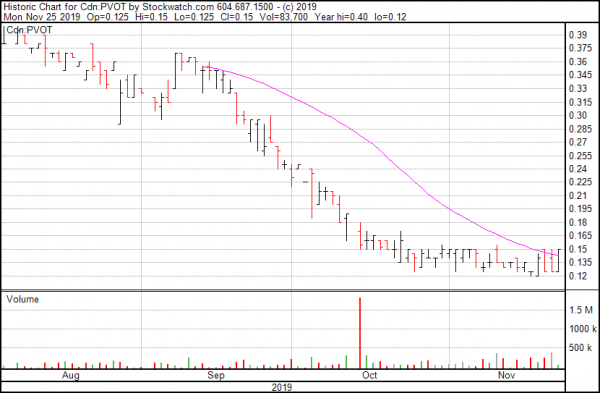 The ski-slope pattern to the above chart is fairly common to the cannabis industry, which did not have a good summer. The long awaited correction finally arrived and affected the revenue-streams of a lot of different companies in the space. We can see that reflected in Pivot’s chart, which has seen its price whither by more than two thirds ($0.36 to $0.12) since August. Today, though? It’s up at $0.15, but the day is young at the time of publication.

There are a few upsides to all of this, though. First, there’s their dirt cheap $11 million market cap.

Second, a quick glance at Pivot’s most recent financial release shows assets almost doubled between January 2019 and July 2019, growing from $9,718,033 to $17, 929,374, while liabilities shrank from $6,218,420 to $1,372,964 over the same time period. The drastic dip in liabilities is because they paid $3.4 million in convertible debenture debt, which was probably the smartest, most adult choice they could have made at the time. The market may be down, and lots of companies are absolutely drowning under the weight of bad product, and even worse debt, but Pivot’s showing promise, and that’s good news.