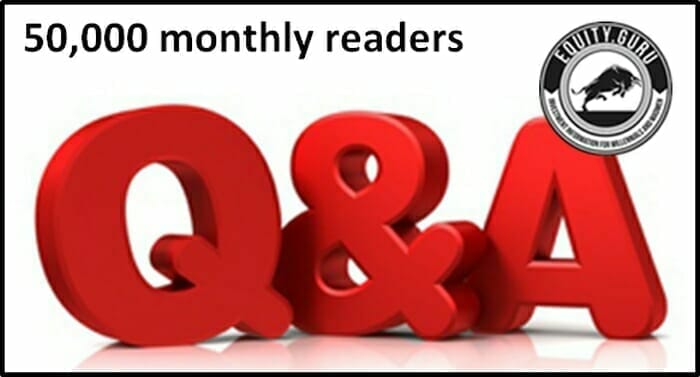 During that time, we’ve called three market corrections, issued multiple code-red investor alerts, while recently launching a website devoted to the nascent mushroom/psychedelics industry, and another website devoted to cryptocurrency.

Our social media reach is now hitting 30,000 people monthly and our newsletter list is growing by 1,000 readers per month.

Some things we are doing right.

Other things – we need to do better.

Reader Question#1: “Can you help a Livewell investor understand how we went from a mini canopy to the shits?”

Sometimes one thing becomes another and it’s so beautiful – or awful – it defies explanation.

The transformation of Livewell from “mini canopy to the shits” fits this category.

Personally, I can’t explain it.

But my boss, Chris Parry can.

“This week Livewell unhalted, at last, rebranding as Eureka 93 (ERKA.C), and rolling back the stock 15 to 1 so it could qualify for a NASDAQ listing based on a higher share price, which now appears to have been an insane folly,” wrote Parry on July 19, 2019.

“That NASDAQ listing isn’t happening any time soon because, part of any measure used to qualify for a listing involves your stock being over $4,” continued Parry.

“And with the stock price of ERKA now down 90% from the last price of 2018, raising money to complete their mission is going to be a lot more expensive than it used to be.

Too much stuff, for too high a valuation, done too quickly, with a trade halt that went too long and failed to read the room in any real way.

Uplisting to the NASDAQ? Come on, man, who goes that way when you’re pre-revenue?”

“Canopy divested due to a dispute about the merger and @Eureka93Inc did a 15-1 split,” stated one irate investor on twitter, “Another company who totally fucked their shareholders.” 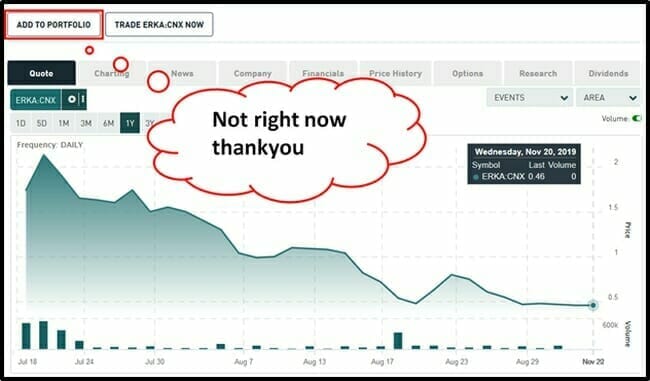 Dear Reader, according the TGOD’S latest financials, the company has “received approval from Health Canada to expand operations at its Ancaster Facility into its 101,000 square foot hybrid greenhouse.”

Plants are expected to be harvested starting Q4 2019 for sales into Q1 2020.  TGOD has obtained its amended Health Canada licence allowing it to sell cannabis extracts, topicals and edibles.

TGOD’s own projections end six-months shy of your 2021 time-horizon question.

We are pundits, not fortune tellers, but in a general sense, by 2021 the things that chew up capital (construction) will be ending, and the things that generate revenue (sales of organic cannabis) will be ramping up.

The sticky issues will be 1. Demand and 2. Profitability.

The stock is up 22% today on news of increased distribution. 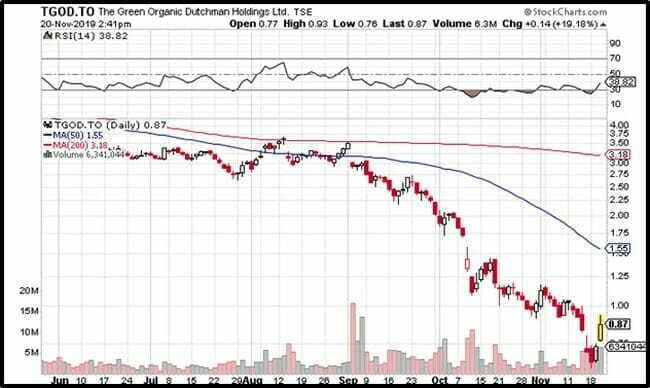 Dear Reader, all Crop (CROP.C) investors are suffering from a medical syndrome called, “T.A.M.M.A” (Tossed All My Money Away”)

“CROP’s opportunity arises from the fact that federal regulations prevent mainstream lending institutions from investing in weed companies,” we wrote 16 months ago, “CROP invests in producers and processors through lease programs and fee-based management options.

On August 22, 2018 Crop announced that its Nevada subsidiary leased “an additional 750 acres of contiguous agricultural farmland bringing the total Nevada acreage to 1,065 acres with 240 acres under pivot.”

The business model was weakened by the loosening of banking regulations in the US. – giving hemp farmers access to more traditional sources of capital funding.

On September 25, 2019 Crop announced that “eight of 10 of the company’s hemp pivots in Nevada have been severely affected by invasive weeds.”

Thirteen days ago, CROP threw in the towel, announcing that MYM Nutraceuticals will buy all its shares in January 2020.

“As a result of a significant crop loss in September, the Company is not in a position to service its outstanding liabilities,” stated Michael Yorke, CEO of CROP, “We believe that this transaction is in the best interest of our shareholders.”

“As CROP’s debt obligations to Plaza and associated debenture holders is currently in arrears and the company is in default, we enthusiastically support the MYM transaction to acquire CROP,” stated Jesse Kaplan, Principal of Plaza Capital Advisors.

Crop is no more. 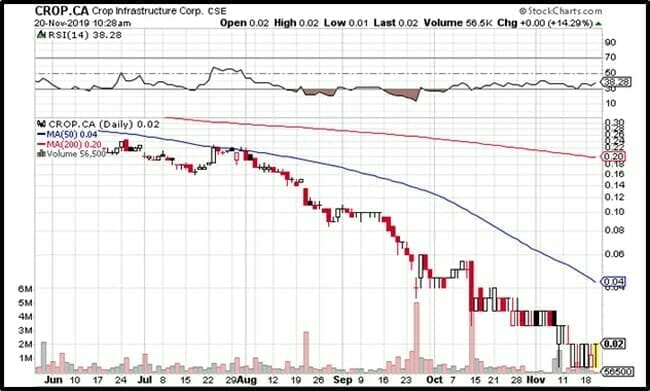 Reader Question#4: “What are your thoughts on VitalHub?”

VHI has a lot of moving parts.

One of them is addressing lack of digitised records in the mental health space.

TREAT is attacking a problem called Patient flow which is about monitoring “the movement of patients through a healthcare facility.”

VHI is an interesting company, with a wickedly smart and hardworking CEO, Dan Matlow.  For the stock to take off they need to sign a deal with a country – not a small hospital network. 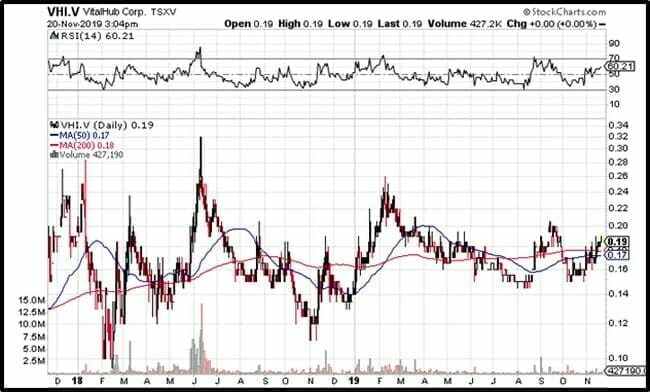 Reader Question#5: “Clean commodities? There’s a halt for them, what’s going on? I recall this company was written about previously. CLE.”

Dear Reader, we have not previously written about “Clean Commodities (CLE.V)” but have done some sleuthing on your behalf.

The company is unsavory goulash of incongruent ingredients.

“We understand the importance of lithium exploration and advancing lithium deposits,” stated CLE a couple of months ago, “it’s our passion and our business.”

​“We recognize that exploration should be focused on commodities with demand growth, which is why we commit our time and resources to pursuing clean commodity resources, particularly lithium, as well as uranium.”

CLE uses “GIS, satellite imagery and other computing technologies to prioritize and source our exploration projects,” stated the company, “and that edge speaks for itself.”

In conjunction with the spin-out, SpinCo intends to seek a listing on the Canadian Securities Exchange.

“Western Hemp represents an exceptional opportunity for shareholders to benefit from the development of a tier-one hemp/CBD platform,” stated Ryan Kalt, CEO of Clean Commodities.  Mr. Kalt owns about 18% of the total outstanding shares.

October 16, 2019 CLE completed a name change to Dixie Gold, where it will trade on Venture Exchange under a new stock symbol, DG.

DG will launch a new website to be located at www.dixiegold.ca. So far there is no website.  No declaration of assets. No stated business model.  No grades.  No metallurgy.

If gold is Dixie’s new wife, for all we know the company is still be cheating on the side with lithium, hemp or 3D printed buildings.

The share price rose 1.1 pennies today, which is a 65% increase.

Clean Commodities (now Dixie Gold) is a little bit of everything, and therefore – at this point – a whole lot of nothing. 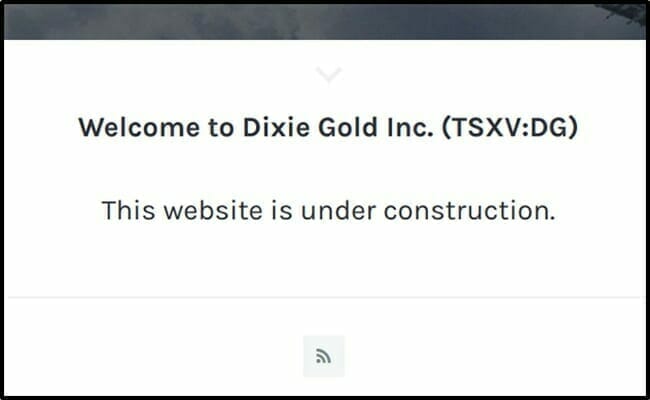