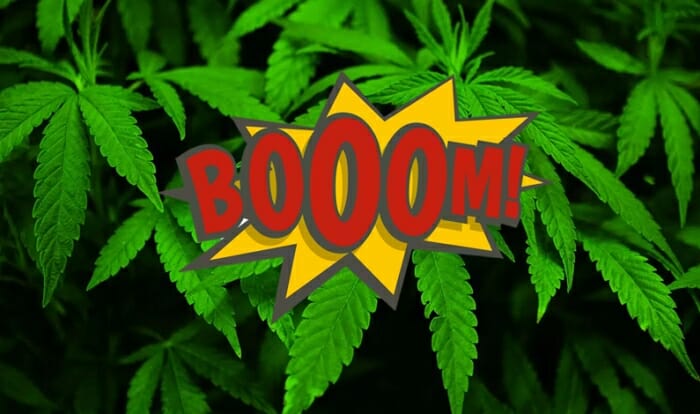 Almost every stock with the word “cannabis” mentioned in the “About Us” link – exploded.

Even MedMen (MMEN.C) – a money hemorrhaging retailer run by ass-clowns – was up 1%.

A rare counter example: iAnthus Capital (IAN.C) was down 2% by mid morning. iAnthus had the nerve to arrive at a cocktail party with a spread-sheet. ($15 million loss reported on revenues of $22 million).

Canopy (WEED.T) Aurora (ACB.T) and Aphria (APHA.T) were up a cumulative $2 billion, meaning they gained a combined $10 million/minute in valuation over the first three hours of trading. 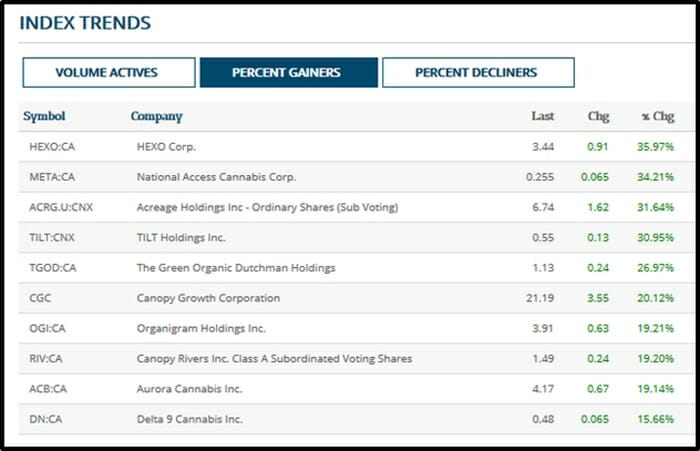 What’s causing all the euphoria?

Yesterday, after the stock markets had closed, the U.S. House Judiciary Committee approved a new bill to end cannabis prohibition at the federal level.

This is a big deal because it the first time a marijuana legalization bill has been given the thumbs-up by Congressional committee.

“New York Democrat and House Judiciary Committee Chairman Jerry Nadler introduced the MORE Act, which would decriminalize marijuana at the federal level by removing it from Schedule I of the Controlled Substances Act,” reported The Rolling Stone.

It also includes a focus on restorative justice, giving states incentives to expunge the criminal records of people with low-level marijuana offenses and instating a five percent tax on cannabis products that would go towards programs benefiting communities hit hardest by the War on Drugs.

“Whatever one’s views on the use of marijuana for recreational or medicinal purposes, arresting, prosecuting, and incarcerating users at the federal level is unwise and unjust,” stated Nadlar.

As today’s sea of green attests, cannabis investors are excited about this new bill.

But they shouldn’t be.

The next step toward legalizing marijuana in the U.S. is for the House of Representatives to vote.

That bill will pass.

After that, it goes to the Senate, where it will fail.

Senate Majority Leader Mitch McConnell (R) is violently opposed to pot legalization. If he choses to, McConnell can cock-block the House bill, stopping it from coming to the floor.

“I don’t think a majority of the Republicans will support this bill,” Colorado Republican and Committee member Ken Buck, told CNBC. “It is even less likely that the Senate would take it up. Therefore, I would just suggest that we deal with other bills that we can get a much larger bipartisan support from.”

Although 80% of democrats believe cannabis should be legalised, Democratic Presidential front-runner, Joe Biden, is sitting on the fence.

“This week I heard him [Biden] literally say I don’t think we should legalize marijuana,” stated Senator Cory Booker turning to Biden, “I thought you might have been high when you said it.”

“Biden has taken a timid stance compared with the rest of the Democratic field, proposing to move marijuana to a less restrictive category, while most other top candidates have detailed proposals for legalizing marijuana — or have supported such legislation in Congress,” reported politico.com.

Biden’s reluctance to embrace legalization — coupled with recent comments that it poses a risk as a “gateway drug” — has opened Biden to further criticism about his past tough-on-crime policies and the perception that he’s old and out of touch.

“Before I legalize it nationally, I want to make sure we know a lot more about the science behind it,” countered Biden deploying his trademark tactical cautiousness.

For most of 2019, the cannabis investment sector has been a torture chamber, so it’s understandable that investors want to blow their kazoos at the first ray of sunshine.

Expanding your legal market from one or two states to 48 – would be a pretty big deal.

1933 Industries (TGIF.C) is an example of a cannabis company with a business model that could be duplicated in other states. 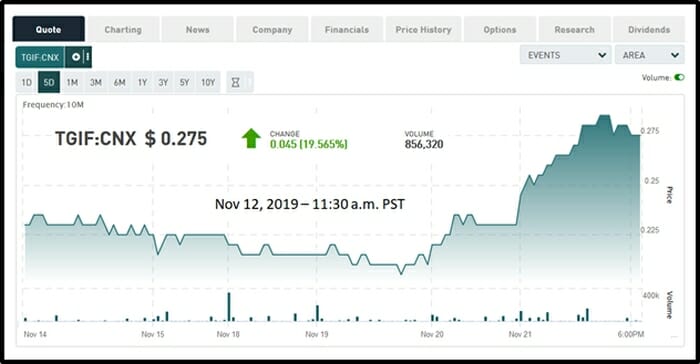 Seven weeks ago, TGIF announced that it has begun the flowering cycle of its cannabis plants in its new, purpose-built, indoor cultivation facility located in Las Vegas, Nevada.

The Nevada hemp facility has a monthly throughput capacity of 68,000 kgs. of hemp biomass, producing approximately 5,000 kgs. of full spectrum oils or 4,500 kgs. of CBD isolate.

“We track our demographic,” stated Rebentisch, “With the THC product, we have a slight majority of men, aged 21 to 35.  But then on the CBD side, the non-psychoactive side, it’s the 40 to 80-year-old, predominantly female. It’s the older professional woman. It’s the soccer mom. It’s the grandma.”

In this November 6, 2019 podcast with Parry, Rebentisch reveals 1933’s branding strategy, and why he doesn’t chase celebrity endorsements. Research on Canadian Insider reveals aggressive buying and zero selling by 1933 insiders.