Listen up, true believers – Canopy Growth Corp (WEED.T) will not be rewarding your love any time soon.

This isn’t news, obviously. We’ve told you this several times. Hell, your CEO told you the company would need at least three years to fly right.

And yet, even after the company released financials today that showed a BIG drop in revenues and a MASSIVE amount of returned product and write-downs, the stock is only down 14%.

What, do you guys think the worst is over? That suddenly their product isn’t going to be the laughingstock of the industry? That the $300m losses are turning to profits next time?

I mean, Jesus, Supreme Cannabis (FIRE.T) loses 15% of its valuation every time the CEO passes wind (note to Nav: Leafy green diet from here on), but CGC loses money faster than you or I could find ways to spend it, and yet some of you are STILL convincing yourselves that this too shall pass.

That’s a headline that buries no lede.

Canopy does, however, work hard to try to soften the blow.

The company has established leading market share across the country including a noteworthy share of over 35 per cent in Alberta, Canada’s most developed provincial recreational market.

That’s their first highlight. Not revenues or EBITDA or margins… but market share in a single province. This is the cannabis equivalent of a baseball stat.

“Well Chuck, in two on/one out situations in the 9th inning with a one run lead, it appears Canopy is in the top five in the league, so you have to like their chances here.”

Consumer demand for cannabis continues to increase versus the first quarter of 2020 with company-owned recreational same-store sales growth of 17 per cent and global medical organic growth of 23 per cent.

“.. and in situations where they have 3 balls and no strikes, their batting average increases by 14 points, Bob.”

Consumer demand for cannabis continues to increase versus the first quarter of 2020 with company-owned recreational same-store sales growth of 17 per cent and global medical organic growth of 23 per cent.

“We should also consider the wind is blowing in from the east which might put a charge on his balls to left field.”

As part of a management-initiated portfolio review, the company has taken a restructuring charge of $32.7-million for returns, return provisions and pricing allowances primarily related to its softgel and oil portfolio.

“And Zekulin sits with a called strike three.”

Newsflash: When the pig is bleeding from the neck, quit trying to ride it.

At an $8.5 billion market cap, Canopy Growth Corp is STILL overvalued, and by a wide margin, and still years away from being profitable by the CEO’s own admission. I’m not one to tell people to buy or sell a stock, that’s not my job and I’m not your father or your financial advisor.

Boomers invest in Bombardier (BBD.B.T) because Bombardier has just always been around, despite Bombardier being an actual money pit. Old people do that, they buy whatever the biggest company in a sector is, wait for their 2% dividend yield, and watch Matlock.

But you millennials, who supposedly don’t make the same mistakes as grandpa, KEEP MAKING THE SAME MISTAKES AS GRANDPA when it comes to investing.

Canopy is a money pit, and will be for many quarters, but folks keep buying anyway like, if you just believe hard enough you’ll turn it around with your $300 stock buy.

Hey, maybe you came up with Canopy when it was Tweed, and it made you a lot of money and so you’re fond of it now, even though it’s burning through your wealth.

Top tip: You can stay fond of it and be completely out of it.

I only hold three cannabis companies currently, though I like a dozen or more, because the market is pulling everything down and tax loss selling season will be worse.

And that means, even the good companies are holding their news whenever possible. Why burn a good announcement into a selling market? Might as well let the weak hands sell up and come out of the gate bursting with good news on January 1.

“But you don’t understand!” I hear some of you yelling. “Canopy are turning it around!”

And you know what? I agree with you. They’re absolutely (finally) working to fix the things Bruce Linton built that were about market cap increases above operational health and put the whole freaking ship in peril.

But I’m not looking to ride your turnaround. Haiti is turning it around, I still ain’t buying waterfront property in Port Au Prince, you feel me?

BE OUT OF BAD DEALS, EVEN IF YOU LIKE THEM LONG TERM. 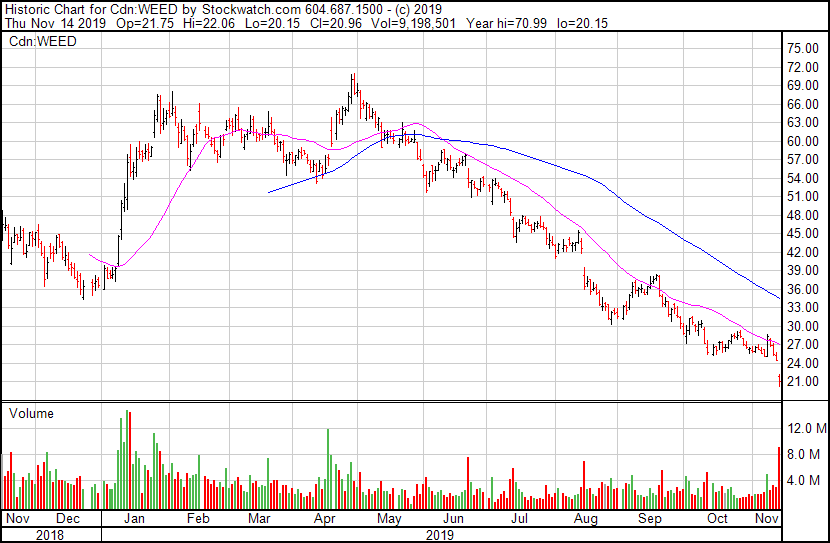 If you Canopy joyboys had sold your stock at $60, when everyone was telling you to, you could have bought back in today and got 3x your stock back.

Hell, if you’d sold last quarter, when the company announced more than a billion dollars in losses, you would have got twice the stock back buying in today.

Instead you’re out on Facebook banning folks from your investor group if they don’t share your homerism about a company that has lost, in the last three quarters, nearly TWO BILLION DOLLARS.

This is a terrible company. It has low quality products that are being routinely returned. And when weed is returned, you don’t just stick it on a truck to send to someone else – it’s done. Maybe you can squeeze it for oil for some industrial use, but it’s dead as a premium product.

Add to that the obvious badwill (if that’s not a word it should be) from customers who have chosen to return their product and will undoubtedly be all over Twitter and the like telling people about it, and you’re in a corporate toxic bloom from which it will take years to recover.

Seriously, they’re sopping wet. It’s dried out a fair bit since I picked this can up, but the brown fan leaves are still damp and pliable, and cling to the buds like expired lettuce.

If you click on that review, it gets WORSE, not better.

The company continues to build high-quality, dried flower inventory that it believes will be necessary to meet the increased demand that will be generated by growth in the recreational cannabis retail platform across Canada over the next 12 to 18 months.

By any measure, this is patently untrue. When your revenues have to be reduced by $around $10m per month because of returns and inventory write-downs, you’re not convincing anyone that high quality is in your checklist.

That said, others who DO have high quality weed aren’t exactly lighting up the balance sheet either. Aurora announced their own loss today, and it’s not small.

That all seems good, doesn’t it? And yet:

Aurora is working hard at rationalizing their operation, and described how they’re reworking debt and shuttering buildout on several facilities in the same release. That’s good, and their revenue isn’t far from Canopy levels, but they’ve borrowed so much to get there, it’s weighing them down hard.

Closed an amended and upsized $360-million secured credit facility, which includes an accordion feature that enables Aurora to upsize the facility by approximately $40-million. As at the date of this release, approximately $160-million of this facility has not been drawn and remains available to Aurora;

They’re not alone on the borrowing front:

[Supreme Cannabis] also announced that it has entered into a credit agreement with Bank of Montreal (“BMO”) as Lead Arranger and Agent on behalf of a group of lenders (collectively, the “Lenders”) for $90 million of senior secured credit facilities consisting of a term loan of $70 million and a revolving credit facility of $20 million (the “Credit Facility”).

The $16m net loss for the quarter is not what we wanted to see, but mirrors the sector.

Note: Emerald will lose this fight.

And it’s why they just took out a dogshit discount financing for a few million bucks.

Take it away, Robber Baron Industries:

Emerald is due a payment to the JV, which is frankly the only thing they have generating significant revenue, and they don’t have the cash to make it. If they should default on that payment, Village Farms has the option of increasing their stake into a controlling interest, or paying on Emerald’s behalf and receiving a prime plus 15% interest rate on the debt.

$EMH is finding it harder and harder to raise funds. They quietly just raised $2.5 million at $0.57 by issuing 4.4 million shares. $VFF must be licking their chops…They will own more and more of the PSF JV if $EMH can’t pay their bills! Nice read page 39 from JV agreement! pic.twitter.com/BOsv9MeKRW

Bottom line is, tax loss selling season is a month away. Even if your favourite weed company started moving north today, it’s going to be dragged back in 30 days, and that includes every client we have and, likely, every stake you hold.

Stay out of the blast zone. Reward adult behaviour. Don’t be the first one back in.

Protecting your wealth is far more important than telling yourself you’re a team player.