I’m certain that Donald Trump’s legacy as President will contain many things, one of which will certainly be his impact on global markets. I think this will be iconic for two distinct reasons: first, because no other president would have moved the markets with less than 280 characters. And second, because these massive swings would have been accomplished via no real long-term macroeconomic policy changes.

Anyway, Trump addressed Wall Street today and boasted about the historic highs the markets achieved during his presidency. He also *warned* investors about things taking a turn for the worse if a democratic party were to emerge victorious in the coming year.

Your STAT 101 and ECON 101 at college should be sufficient for you to know the following:

In context to these two facts, I don’t know to what degree Trump can be credited for all-time market highs. I mean, if things would’ve taken a turn for the worse and we were hit with a recession, then I’m sure he would’ve blamed the Obama https://e4njohordzs.exactdn.com/wp-content/uploads/2021/10/tnw8sVO3j-2.pngistration for their “policies” as the root cause.

To what degree the business cycle is affected by politics and vice versa is a separate debate altogether, one better left for a political economist. This is why it’s important to “control the narrative”, and why politicians are adept at building their careers around it.

To continue, Trump talked about his disappointment with the Federal Reserve, saying that higher rates put the US at a “competitive disadvantage” in the global marketplace. With the S&P up 36% since Trump took the office, investors now have an incentive to protect their gains.

This incentive is highly catalysed when you factor in the fact that those very gains could be wiped away with more tariffs if Trump sees himself losing. Hell, he doesn’t even need to see himself losing, the very possibility would be enough to make anyone who gained 36% over 4 years a reason to worry. As you might expect, Trump has already issued warning that if China doesn’t comply with phase one of the deal, more tariffs are coming.

The winds have changed in the markets on account of the looming optimism from phase one trade talks ending on a positive note, and in less than 90 days the markets have gone from being worried about the recession to being bullish on everything. That’s “investor sentiment”, and a good time for me to remind you to do your own due diligence.

AbbVie Inc. ($ABBV) sold $30 billion worth of bonds to help finance its acquisition of Allergan Plc, and investors flocked to buy one of the largest offerings in the debt capital markets. With low-interest rates, it makes sense to fund the acquisition with a bond sale. 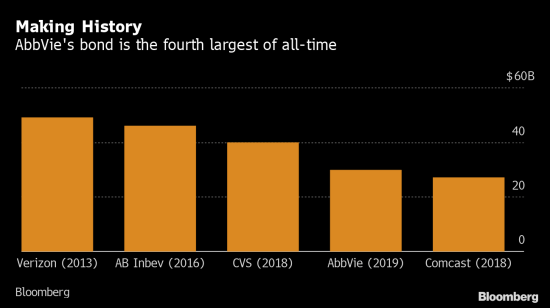 The firms bond sale is one of the biggest this year and the fourth largest of all time. It came in 10 parts with 30-year securities yielding 1.90 percentage points above Treasuries. AbbVie agreed to buy Allergan in June for $63 billion, with hopes that the acquisition would fund the much-needed diversity to AbbVie’s drug portfolio.

Apple ($AAPL) plans to debut a new lineup of MacBook Pro laptops with a larger screen and a better display this Wednesday, according to a Bloomberg report. The refreshed lineup is set to feature a refreshed keyboard, something that Apple hasn’t been able to fix ever since Jobs departed.

The new display will not, however, increase the size of the laptop as Apple will reduce the bezels on larger displays. The 16-inch MacBook Pro will replace the current 15-inch model and will start at $2,399 USD. Despite Apple boasting revenues (and profits) from its services business, sales from its MacBook lineup remain steady, bringing in roughly $25 billion in annual revenue.

Apple stock has been soaring in the past few weeks with an earnings beat, a lineup of new phones, and the launch of its streaming platform – Apple TV+. The stock closed at $261.96 this evening.