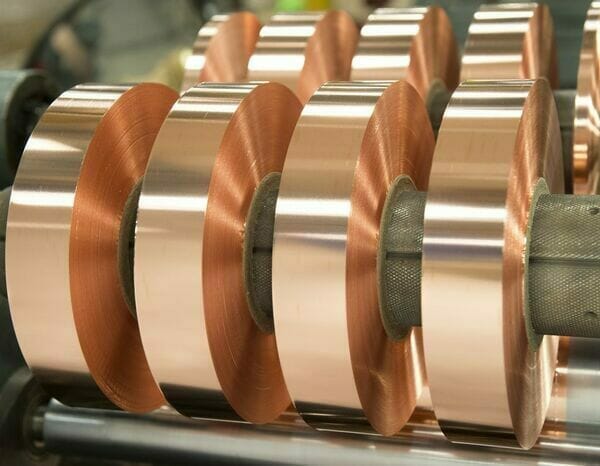 It would appear The Economist is onboard with the concept… 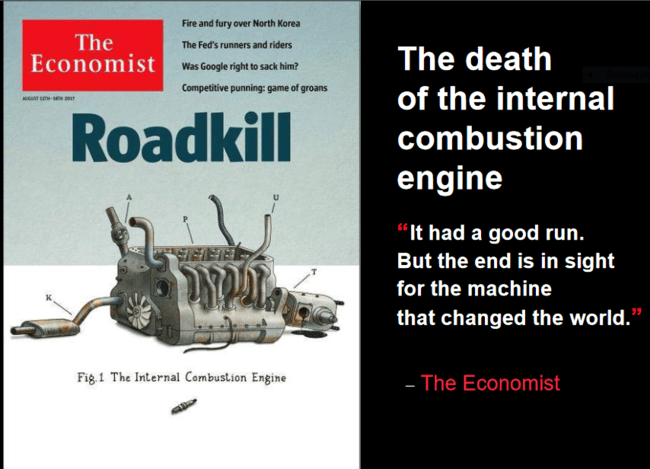 Ironically, meeting these green objectives will NOT be possible without an exponential increase in mining activity—a lot more digging, blasting, and crushing of billions of tonnes of rock will be required, not to mention the inevitable toxic gas n particle belch-fest, courtesy of the smelting process.

Yep, there’s irony here. It would appear Mining suddenly has some unlikely allies. 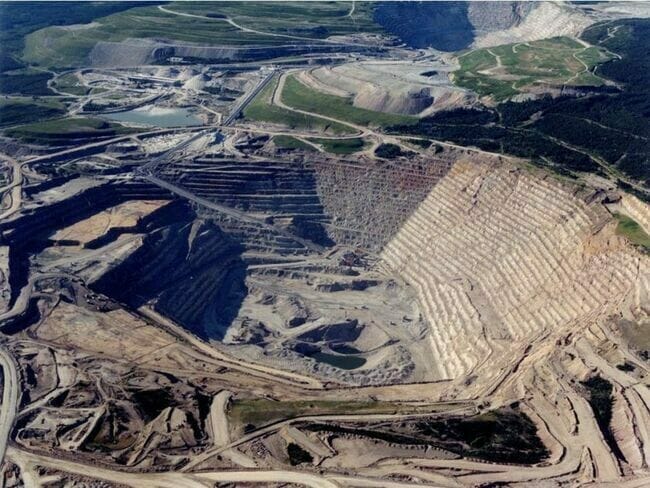 Highland Valley – THE largest open pit in Canada. Personal note: I worked reclamation at Highland Valley back in the day. The “Waste Rock King” was my handle having set the record for the most trees planted on waste rock material in a single day (2,650 seedlings plus fertilizer tabs)

Copper, a malleable metal with excellent thermal and electrical conductivity properties, has some extremely compelling supply-demand dynamics when viewed from a distance.

Even the charging stations that keep these vehicles in motion require copper—heaps of it: 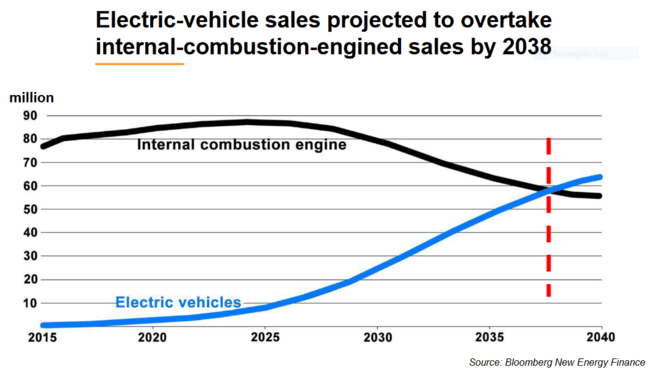 More examples of the role copper will play in a greener world:

According to the International Energy Agency, worldwide demand for air conditioning is expected to triple over the next 30 years:

As we stated in a recent Guru offering:

As our species attempts to sustain the urbanization of our planet – there will be eight billion of us tripping over one another in only four more years – the demand for green metals, like copper, will go through the roof.

According to Gianni Kovacevic, CopperBank Resources’ CEO, “19% of energy today is electricity. In the next 30 years that number will climb to 50%.”

We have less than 20 years worth of (economic) copper reserves remaining with nearly half of the world’s primary copper supply coming from only 20 mines.

Further down the foodchain, the next group of large development projects run grades in the range of 0.4%. These .4% deposits simply are NOT economic at current Cu prices, and again, we need this supply.

A lot of time, resources and money has gone into probing the subsurface for this green metal. The result: very few large, economic discoveries have been made.

Here’s a sobering chart that emphasizes our current predicament: 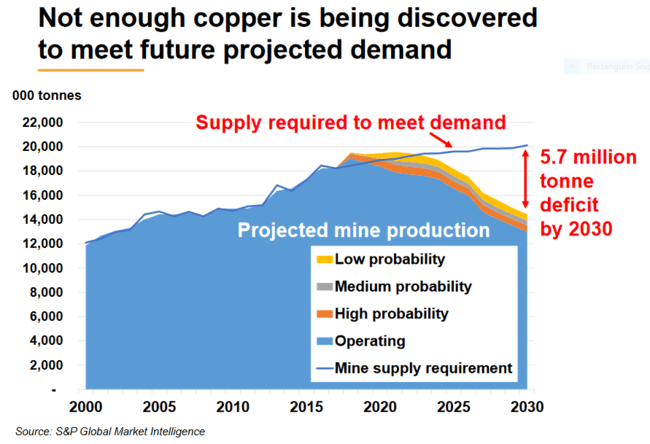 With global Cu supply compromised and demand beginning to ramp up, one would expect a steep upward trajectory on the charts.

The price of Cu should be tracking all-time highs, should it not?

Nope. Though there has been some constructive price action in recent sessions, copper is jammed up in the middle of its five-year range.

The companies delineating and developing large projects? Shareholders must be scratching their collective heads wondering when, or if, they’ll ever get paid. 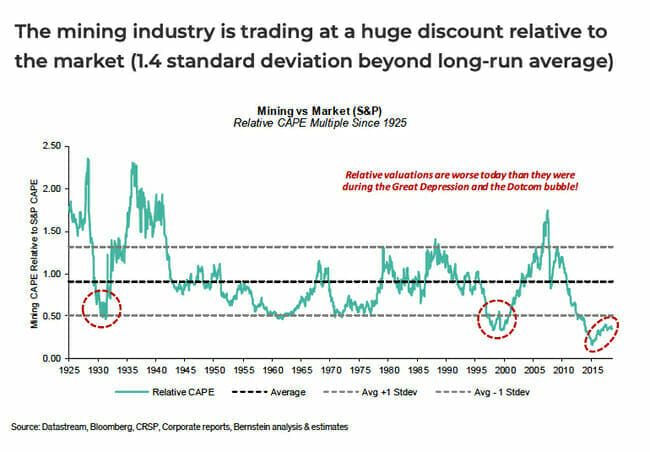 It’s estimated that a 50% lift in the price of copper will be required to incentivize new mine development—to dust off these .4% and .5% copper deposits and push them further along the development curve.

The market is currently ignoring the tight supply story. That will change. And I’m guessing we won’t have much longer to wait as reality kicks in and a significant upward price trajectory is catalyzed in both the metal, and the share prices of the companies involved.

The CopperBank story is a good one. It’s one of my favorites, not just for its extraordinary Cu endowment, but for the talent running the show.

As the name suggests, the company is a copper ‘bank’.

CopperBank boasts a substantial reserve and resource base: 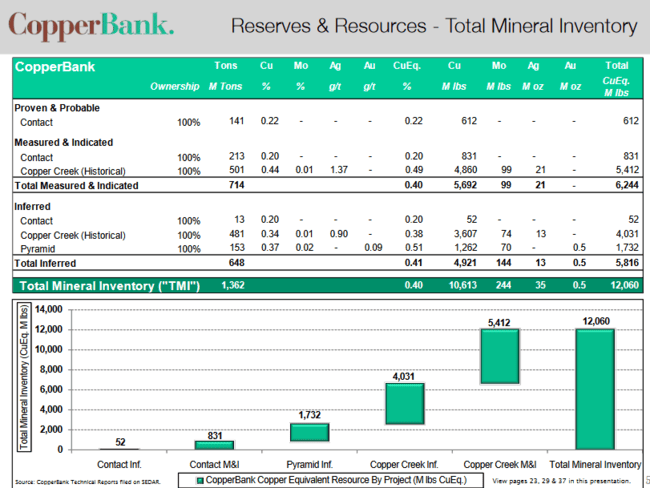 All of the projects in its portfolio—two in Nevada, two in Alaska, one in Arizona—possess considerable untested exploration upside with the potential to add pounds-in-the-ground to its already substantial resource base.

The company’s recent acquisition in Redhawk Resources is a good example of point #1, and demonstrates the deal-making savvy of this management team.

Redhawk’s Copper Creek Project is a large porphyry-style deposit that, via a 2013 preliminary economic assessment (PEA), shows a pretax NPV of US$488m, and a 16% IRR using a US$3.30 copper price.

Check out how a 30% lift in Cu prices will impact Copper Creek’s economics according to this price sensitivity chart: 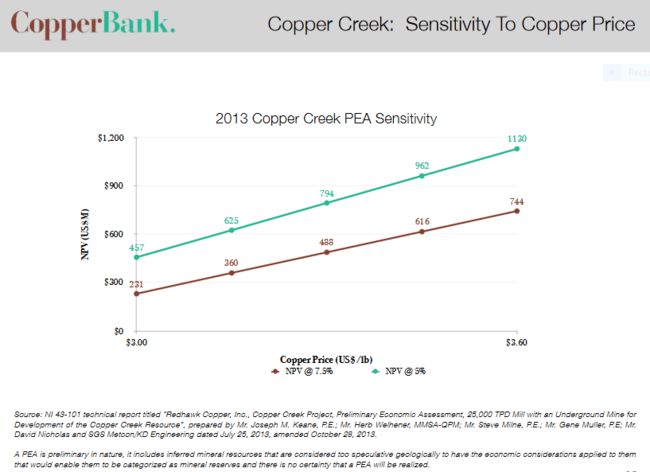 Copper Creek goes from marginally economic to robust with one swift (and necessary) push higher on the Cu chart.

Another piece of news that dropped in recent weeks that I found particularly compelling was management’s move to create a royalty arm—CopperBank Royalties Corp.

The launch captures two royalty assets from the company’s own project pipeline: the Contact Copper Project located in Elko County, Nevada, and the Copper Creek Project discussed above.

What, you may be asking, is a “Royalty Company”?

Royalty companies give cash to miners in exchange for a share of the mine’s future sales.

It’s like lending someone $10,000 to build a bakery – with the baker agreeing to give you 1% of his bakery revenues.

If the bakery never opens, you lose.

If the bakery produces bread for 30 years, you win.

If the price of bread triples, you win.

If the bakery increases production, you win.

Editor’s Note: a “streaming company” is similar but it gets paid in bread, not cash.

This royalty subsidiary is a game-changer in this author’s opinion. Whether the company develops these assets on their own, or a larger entity swoops in and puts them into production, current CopperBank shareholders get PAID.

CopperBank, in my view, represents a long-term Call Option on the price of copper—a Call option with no expiry date. This current sub nickel share price is a total fucking joke.

Rockridge is another copper explorer-developer on our client list.

What I like about Rockridge is its top-shelf address, and the geological setting underlying its flagship asset.

Since the discovery of base metals back in 1915, the Flin Flon camp has produced in excess of 170 million tons of sulphide ore from 31 volcanic massive sulphide (VMS) deposits worth in excess of $25 billion dollars. 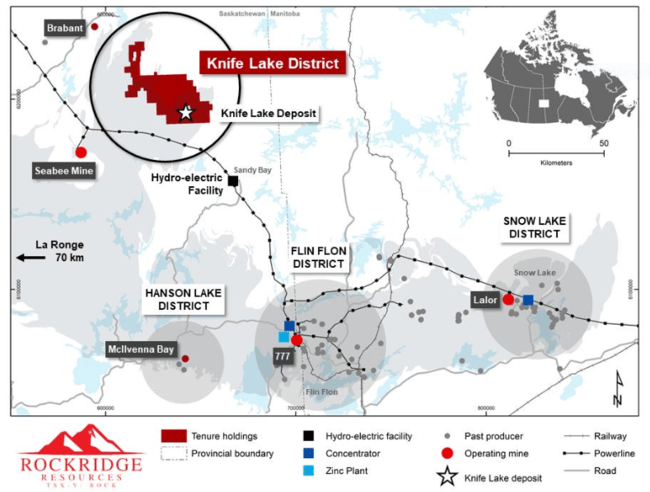 As noted above, Knife Lake lies within a VMS setting. Those who have been around this arena for a while know that VMS deposits are unique.

Where there is one VMS deposit, there are often others. 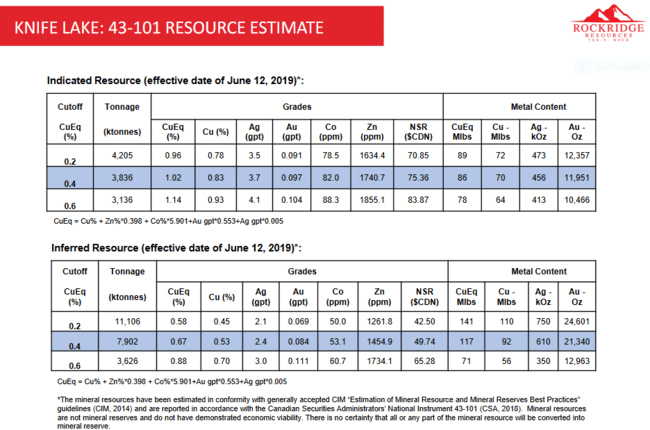 Rockridge management believes this resource to be a “remobilized portion of a presumably larger primary VMS deposit”, or, more simply put, a chunk that broke away from a larger deposit.

Historic conductors, alteration and mineralization in the vicinity of the deposit elevate the intrigue surrounding this play. Remember, this is VMS country. 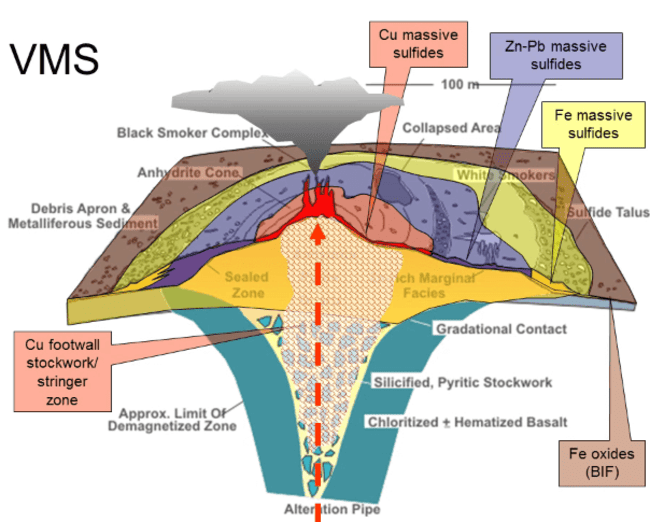 Image courtesy of the 911Metallurgist

Earlier this summer, the company put boots to the ground with an aggressive soil sampling, prospecting, and mapping campaign.

And just last week, they dropped the following piece of news:

This is where things get interesting. Exploration can be a wildly exciting process. Mobilizing a drill rig to a high-priority target(s) is what really stirs things up in this arena. It’s also what the Producers—resource hungry predators—keep a close eye on for any indication of an economic orebody. 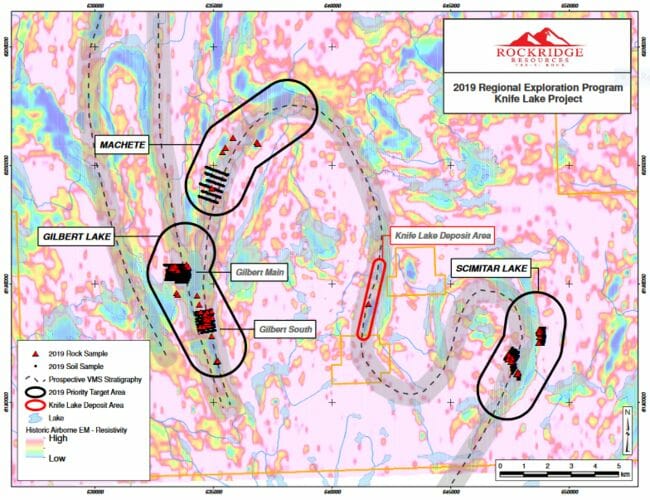 Note the scale on the above map. The circled target areas could host a “larger primary VMS deposit” that the current Knife Lake resource broke away from.

Keep an eye on this one.

We may also hear news out of their Raney Gold Project in northern Ontario in the coming weeks.

REEs form a group of 17 elements (atomic numbers 57-71) that exhibit a wide range of unique electronic, optical and magnetic properties.

Though dispensed in small quantities, they are an essential ingredient in the production of permanent magnets—magnets used in everything from medical imagining technology, to commercial jet engines, to next-generation (thrust-happy) motors.

Closer to home, several pounds of REEs go into every single EV and hybrid car that rolls off the factory floor today.

With the green revolution searching for a means to meet global power demands through clean, renewable, and zero-emission energy sources, our appetite for REEs is growing. Production will need to increase. Dramatically.

This onesided domination of the REE supply chain could wreak havoc on the tech industry out West. 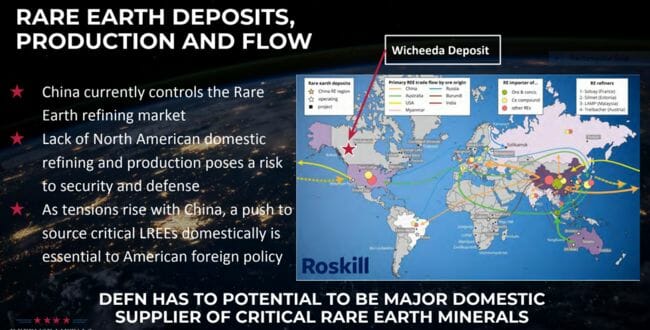 And herein lies a unique opportunity for investors. What DEFN has in its own backyard is what the West needs more of. Desperately.

Two major developments have surfaced in recent sessions that elevate the significance of this strategically positioned resource.

In an October 23rd news release, the company revealed that a final phase of metallurgical testing had produced an impressive 85.7% recovery rate and a concentrate of 48.7% TREO (Total Rare Earth Oxide).

A 30-tonne bulk sample extracted from Wicheeda earlier this year was used in these met-tests (the bulk sample sports a head grade of 4.81%).

For those unfamiliar with metallurgy (the science of extracting desirable metals from their ores), it’s everything. If you can’t separate the metals from the surrounding rock, it’s not worth digging out of the ground. Simple as that.

Since shipping is a big cost driver for the mining scenario envisioned at Wicheeda, producing a concentrate 10-times the 4.81% head grade will reduce these costs, dramatically.

The second major development was in the release of the first set of assays from a summer drilling campaign.

The second hole (WI19-21) tagged 3.26% TREO over 110 meters. This mineralization was intersected only a few meters from surface.

Both of these intervals demonstrate significant grade and length.

Importantly, WI19-20 expands the current resource 25 meters to the southwest. 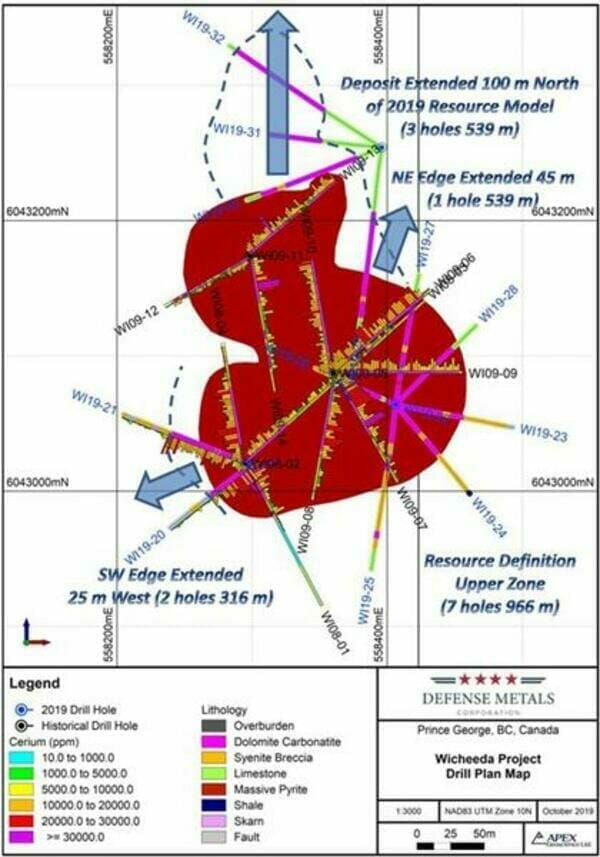 There’s more to this story. We’ll have plenty more to say in the coming days.

We also have a graphite company on our list

Ceylon is a Sri Lankan focused graphite explorer and developer. If you’re new to the green metals arena, graphite is a major component in the production of EV batteries.

Ceylon’s CEO, Bharat Parashar, calls graphite the “new oil.” His reasoning: if you break down the components of a lithium-ion battery, you’ll discover that roughly 60% is the anode. And the anode, tells Parashar, “is all graphite”.

This is another green metals explorer-developer that isn’t getting anywhere near the respect it deserves.

Parashar’s company is in control of some 121 square kilometers of geologically prospective terrain. And Parashar’s graphite is unique—it’s nearly battery-grade in its natural state. Its carbon content is greater than 90% with some of the better vein material pushing 98% or better (grades elsewhere around the world typically run between 30 to 50%).

I count seven, the number of significant high-grade vein discoveries Ceylon has made over the past two years. 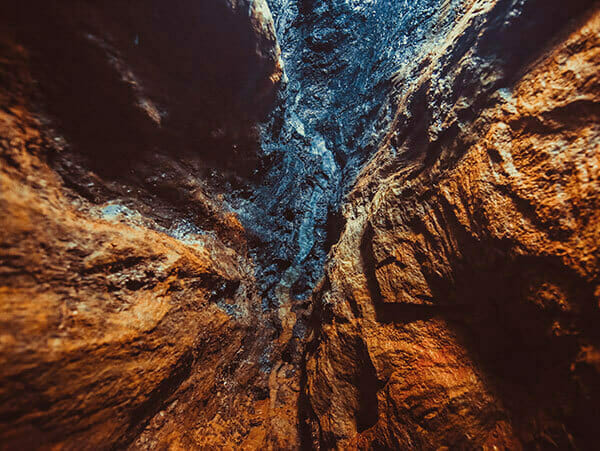 Some of these vein structures are exposed at surface. Some were discovered quite by accident, while digging shafts underground.

CEO Parashar, on a high-grade discovery at the company’s H1 site earlier this year:

“The size of this vein is larger than anything we have seen below the surface – it is ‘Epic’ by any standards. We are delighted at the continued growth in the size of the vein. The M1 site continues to provide fantastic results and will likely be one of the largest graphite finds in Sri Lanka. Ceylon Graphite is looking good to soon start commercial graphite production.”

Ceylon has a number of sites distributed along the development curve—the KI site is the most advanced.

On August 26th, the company received a mining license from the Sri Lankan government to commence commercial production at K1. 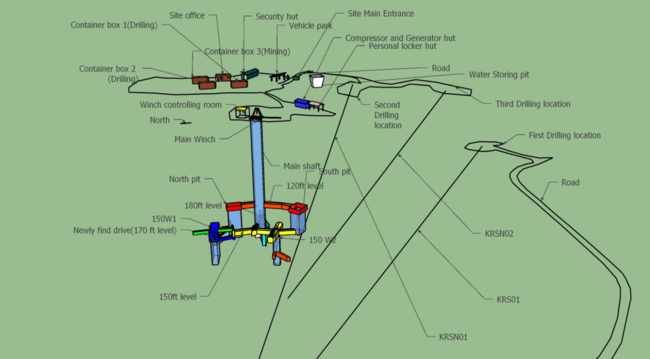 Just today, the company cleared the final environmental hurdle and is now prepared to break ground.

This first production scenario is set at 4,000 tons per year and will be brought online at roughly $2M. With costs expected to run roughly $200.00 per tonne, K1’s economics are extremely compelling.

The crappy backdrop in the market isn’t dissuading CEO Parashar from moving K1 forward. On October 17th he closed a private placement (PP) taking in just enough—$800,000.00—to get the ball rolling.

When the market snaps out of its funk, hopefully early next year, we’ll likely see the company ramp up development with a larger (PP) raise.

If you’re looking to add some green to your junior explorer-developer portfolio, the above companies offer good exposure and (speculative) value.