In today’s edition of the rich and powerful using their wealth and status to influence politics and policy, we have – Michael Bloomberg. Former New York City mayor and current billionaire, Mr Bloomberg is taking steps to enter the 2020 race for the Democratic presidential nomination.

With Mr. Bloomberg, there will be 17 horses in the race vying for the Democratic nomination, two of whom are billionaires. Mr. Bloomberg had been a lifelong democrat before he joined the Republican Party before running for mayor in 2001. Later, he left GOP and became unaffiliated with any party. Last year, he re-registered as a democrat.

In March, he also announced that he wouldn’t run for office, not because he felt that he wouldn’t be able to defeat Trump, but because he felt that the competition was simply too brutal amongst the democrats. “I believe I would defeat Donald Trump in a general election,” he wrote. “But I am clear-eyed about the difficulty of winning the Democratic nomination in such a crowded field.”

I don’t know about you, but I certainly want to see what it will look like when two billionaires are pitted against each other on policy to determine the fate of the world’s largest economy. What’s even more interesting is that you have a billionaire and somewhat anti-billionaire competing for the same democratic nomination. Elizabeth Warren was rather welcoming.

Welcome to the race, @MikeBloomberg! If you’re looking for policy plans that will make a huge difference for working people and which are very popular, start here: https://t.co/6UMSAf90NT

Disney cashed in some of the chips it won when it played the streaming hand. The company is days away from the launch of its streaming platform, Disney+, and before new subscriptions have kicked in, the company seems to be doing well in its production business. Here are the stats:

CEO Robert Iger has spent billions buying franchises like Avengers and Star Wars, both of which will be available to fans online with the launch of Disney+. It seems like Disney has recovered from its results in the previous quarter when it underperformed market expectations as audiences took well to The Lion King, Toy Story 4, and Aladdin.

The company’s long-awaited streaming service, Disney+ is set to launch on November 12. The service costs $6.99 per month, or $69.99 per year, and will feature content from Disney, Pixar, Marvel, Star Wars and more. Disney has already sold year-long subscriptions to its streaming service at a discount to users, and I imagine more will follow suit as franchise movies are available online.

The key question is whether this fan base will be enough to satisfy investors. Apple is not holding back in the content creation game, and I can its “The Morning Show” and “See” garnering a cult-like following akin to Game of Thrones. For a technology company, Apple has surely burnt a lot of cash to compete with Dinsey and Netflix.

What’s different for Disney is that it is already a media company that’s not really entering a new business as much as it is entering a new marketplace to expand its existing business.

The United States and China have both agreed to roll back on tariffs on each other’s goods in phases as they work towards a deal.

White House economic adviser Larry Kudlow confirmed with Bloomberg that “If there’s a phase one trade deal, there are going to be tariff agreements and concessions”. While the market indices have priced in the looming optimism about settling the trade war, it’s a bad week for safe-haven investments like gold and silver.

Bond yields have risen as bond demand has decreased on account of money moving to equities as investors profit from all-time highs. 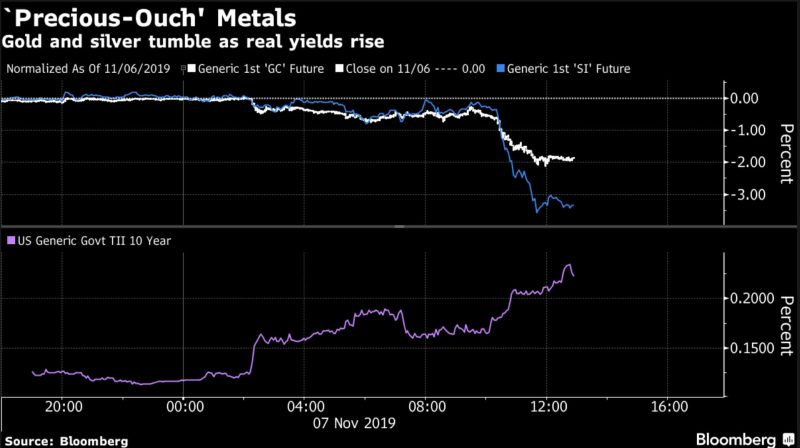