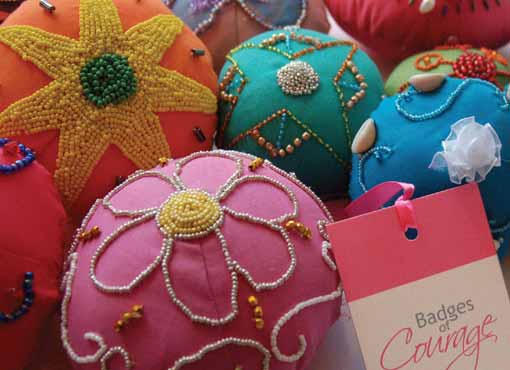 The company raised $38,000 through the sale of breast cancer awareness T-shirts and 10% of sales from limited-edition pink wrapped pre-rolls. Normally when a company does something particularly positive that doesn’t seem to have an effect on their bottom line, they’re usually trying to whitewash or otherwise obscure something. But in this case, they’re helping cancer sufferers, which is right at the top of worthy causes. Curaleaf will host a ceremony tomorrow from 1-3 p.m. at the company’s medical cannabis dispensary on North Miami to present the foundation with the proceeds.

“We partnered with Badges of Courage in an effort to help alleviate some of the financial burden breast cancer patients face during treatment. Our goal is to establish partnerships with organizations that will have an on-going positive impact in the communities we serve,” said Yesenia Garcia, Curaleaf Florida Marketing Director.

Badges of Courage Foundation is a nonprofit founded to help low income women when they contract breast cancer. These women can’t work during the lengthy treatment process and without any money coming through the door, they often can’t afford their basic living expenses.

One of the biggest moral blind spots for the United States is its lack of empathy for sufferers of cancer. If you’re poor and you get cancer, you’re basically fucked. If you’re lucky enough to have assets—sell them off or die. The government will write you off as another sad statistic in the annals of people cancer has murdered that year.

What they won’t do, and what they don’t do, is give poor people a break.

Unfortunately, unless the cancer sufferer has a PhD in chemistry, a camper van and a loudmouth teenage partner, the options are fairly thin on the ground towards making money to pay for cancer treatment.

From 1995 to 2014, there was a sharp increase in the launch price of new cancer drugs—that is, the cost of a new drug being introduced to the market for the first time. Most cancer drugs launched between 2009 and 2014 were priced at more than $100,000 per patient for one year of treatment. More recently, we’ve seen launch prices of more than $400,000 for a year of treatment.

As a consequence of these increasing prices, according to one recent analysis, some patients may face out-of-pocket costs of nearly $12,000 a year for one drug

Even pain meds are costly and carry hidden risks, and adding an opiate addiction on top of metastatic cancer is sub-optimal, but at least there’s a non-addictive, low cost option. And anything that helps the average person avoid the predatory gouging of pharmaceutical companies is bound to be a good thing.

A summer to forget

The story of Curaleaf’s no-good very-bad summer to forget started when they company got on the CBD bandwagon like everyone else. They made a lot of the same claims about CBD that other companies did, and drew FDA attention for overstating some of its health benefits.

The FDA’s letter cites numerous posts on the company’s social media pages as evidence of their claims about CBD.

The FDA’s letter says these “products are not generally recognized as safe and effective for the above referenced uses,” and that they “are offered for conditions that are not amenable to self-diagnosis and treatment by individuals who are not medical practitioners.”

None of this has been definitively proven in FDA approved studies, which makes the above statements both careless and verboten. Naturally, investors lost money, and then followed their losses with class-action lawsuits, which are still ongoing.

But raising money for cancer is a worthwhile cause, and at least in this humble scribe’s point of view, worthy of giving them a pass. At least for now.