Being “original” in business is a double-edged sword.

Yes – it’s good to stand out in the crowd.

But – when you’re all alone – investors may fret that you are a mad zealot on a doomed solo mission.

“Isracann (IPOT.C) is Israel’s first pure-play cannabis firm to list in Canada,” wrote Equity Guru’s Chris Parry on October 16, 2019, “It is focused on becoming a premier, low-cost cannabis producer. Isracann is fully funded for its 230,000 sq. ft. facility under development.”

It turns out Isracann isn’t the only outfit investing in Israeli cannabis.

On October 23, 2019 American rapper Snoop Dogg signed on as a brand ambassador to promote an Israeli cannabis hardware innovation.

A company called Seedo has developed a small refrigerator-like machine that uses Artificial Intelligence (A.I) to auto-grow plants at home.

The brilliant little “grow box” – priced at $2,400 – is equipped with sensors that regulate temperature, light, carbon dioxide and minerals.

It may be a coincidence, but the same day the Snoop Dogg/Seedo partnership was announced, IPOT went on a tear, surging .11 (36%) on 2 million shares traded. 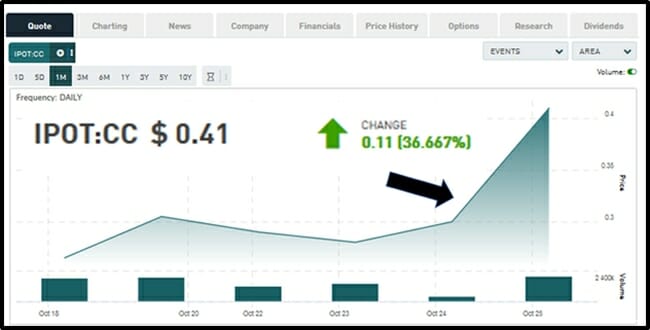 “The sun never hides from Israel. You don’t see Israel making a run at the medals in the Winter Olympics, because the only white stuff in play generally is in the bathrooms of the hottest nightclubs in Tel Aviv-Yafo.  Isracann estimates per gram costs as likely to be around $0.40 per gram.”

“Cannabis likes warm weather. It does okay in low rainfall and crappy soil. While cannabis will grow in temperatures sub-20 degrees Celsius, sugars will not move around the plant as well, and taste and yield will suffer. Cannabis doesn’t just want sun, it likes humidity, so a hybrid grow allows you to keep things just right.”

“It’s estimated 27% of Israelis use cannabis, which makes them a global leader in cann-sumption. Currently, just three countries are slated to allow exports imminently, and Israel is one of those, but nobody producing cannabis is going to ship the stuff currently because the local market is, amazingly, so under-served by legal product.”

“Isracann plans to make their facilities IMC-GAP/GSP (Israeli Medical Cannabis Good Agricultural Practices) certified, which means their products will be export-ready, and that’s set to happen right around the time Israel allows such things.”

Israel’s proximity to Europe, and its established trading partnerships and shipping routes could be an important component of Isracann’s future revenue streams. 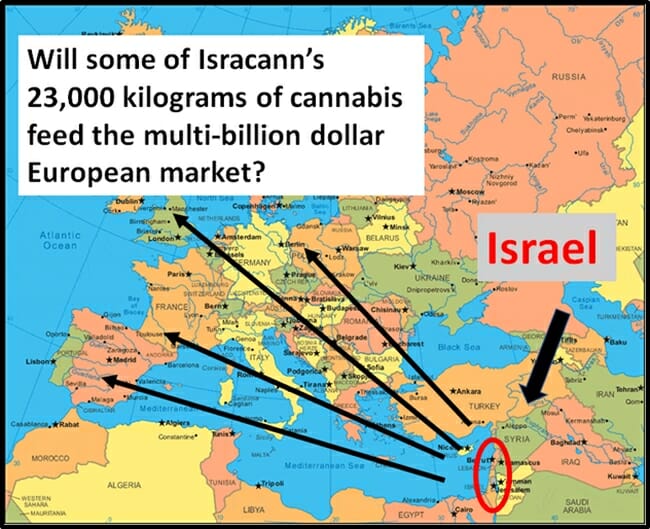 Israel is already a major exporter of fresh food.

This is remarkable because more than 50% of Israel is desert, and there isn’t a lot of water.

In fact, only 20% of the Israel’s land area is naturally arable (farmable). About 3.6% of the domestic work force are farmers, yet Israel produces 95% of its own food requirements.

How is this tiny country so agriculturally efficient?

Israel is sometimes called “The cannabis research capital of the world”.  IPOT has relationships with the research, scientific and medical community to identify opportunities and develop a pipeline of drugs and devices. 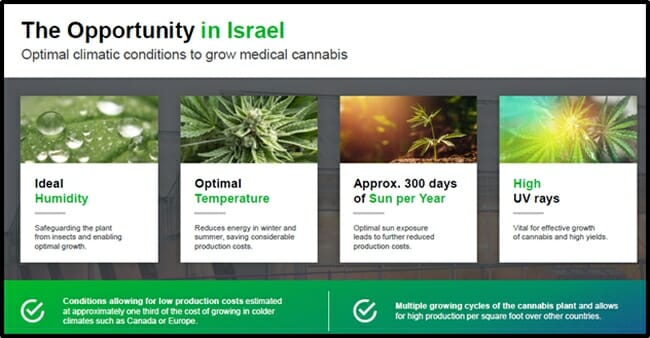 He has a net worth of $135 million, and is one of the key players in Casa Verde (CV) a venture capital firm focusing exclusively on the cannabis industry.

According to a Jerusalem Post Op-Ed, thinking about Israel conjures images of “the bible” “religious sites” “war zones” “conflict” “kibbutzim” and “Zionist pioneers”.

Yet, “Israel, as anyone who has ever been on a kibbutz can confirm, has a long and happy history with weed,” wrote Equity Guru’s Chris Parry on October 16, 2019, “both the growing, and the consuming.”

If IPOT can beat a path to Europe, that could generate significant wealth for early investors.

Isracann has been trading for less than a week.

It has a market cap of about $15 million.