Why did Patriot One (PAT.T) surge 20% on a day without news? 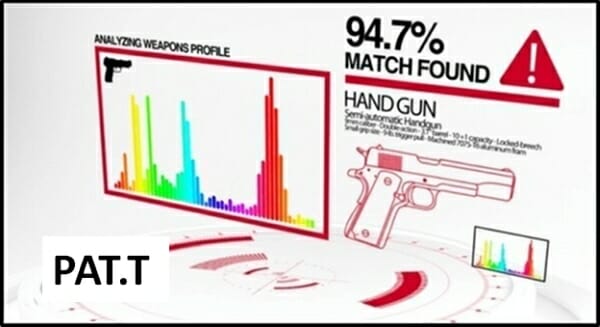 That got the bull-board pundits jumping.

“It would be amazing if shorts are not covering,” wrote Kyyaman08, “The action today seemed to be a lot of motivated buyers. But If it wasn’t shorts covering that just means we have a lot of new longs desperately wanting to own the stock.”

“Any radar experts in the crowd who want to join me to start our own company?” queried another more skeptical investor, “We will make a fortune from these chumps!   We can just download software to our phones and won’t have to worry about shitting the bed over an FCC application.”

Indeed – when launching a new tech company, it is always a good idea to “not shit the bed over an FCC application”. 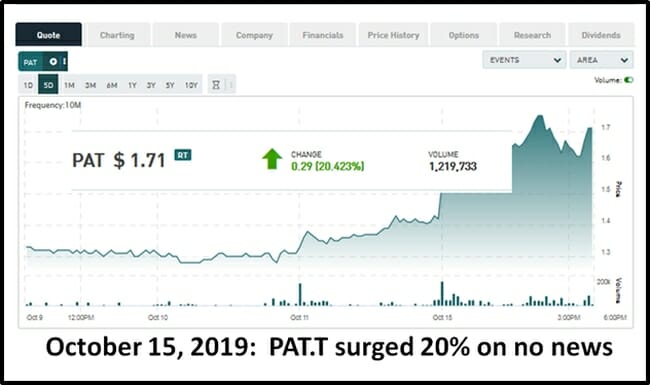 Tindale believes the spike was a confluence of events which could – as Kyyaman08 surmised – include short-covering.

Interest in Patriot One is heating up stateside.

With a market cap of CND $250 million, PAT is sitting in a sweet spot where the company – with some share restructuring – could attempt a move to the NASDAQ.  That often brings in new buying, although we’ve seen plenty of Canadian companies bungle that transition.

It’s also true that – from the perspective of U.S. institutional investors – PAT’s roster of Senior Advisors is eye-popping.

Harward Jr the former Deputy Commander of the United States Central Command, under the leadership command of General James Mattis.  He is currently working with Lockheed Martin in the UAE, Bahrain, Kuwait, Oman, Jordan, Lebanon, Qatar, Pakistan, Iraq and Afghanistan.

If this roster of advisors was a bowl of apples, you would suspect that they had been genetically modified.

Individually, they are bigger and shinier than normally occurs in nature.

Together, in a bowl, they look surreal.

“Most incidents occur at locations in which the killers find little impediment in pressing their attack,” explains Patriot One. “Locations are generally described as soft targets, that is, they carry limited security measures to protect members of the public.” 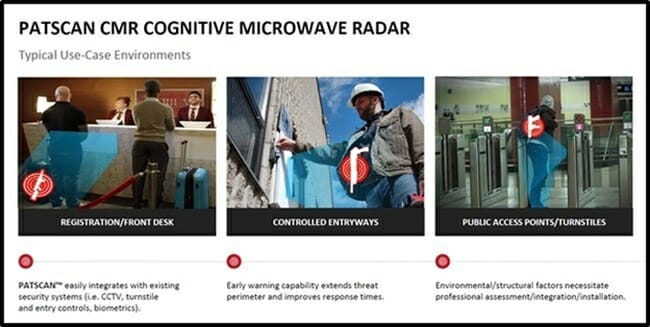 Another facet of Patriot One that generated interest from U.S. investors on the recent eastern roadshow, is Patriot One’s acquisition of Xtract Technologies and all its related assets in a cash and stock deal worth CAD $6 million and 9,422,956 consideration shares.

Xtract is advancing the state of artificial intelligence by developing deep neural network technology that scales how machines learn. This technology is core to PAT’s platform.

Universities are natural locations for discreet weapons-detection technology.  It is not practical to frisk 15,000 students a day – nor would that be good PR for the university to remind the student population that is vulnerable to a gun attack.

Patriot One is a volatile stock.  PAT’s long-term prospects depend on the full commercialisation of its technology.

The opioid crisis and gun violence are two of the biggest problems in the U.S.

But the A.I-driven technology can reduce deaths by gun violence.

That’s a message a N.Y.C hedge fund manager would be interested in, and it may be part of the reason for the October 15, 2019 20% stock price surge.