Plus Products (PLUS.C) partners with a Legend

“John Legend is getting into the cannabis business with a new brand partnership with San Mateo-based Plus Products” stated The Hollywood Reporter on September 17, 2019, “As an investor, the EGOT winner will advocate for the company’s new hemp CBD products, which launch nationwide on Tuesday.

Being an “EGOT winner” is a reminder that God does not distribute talent equitably.

It’s a designation for an individual who has won an Emmy (TV), Grammy (music), Oscar (film), and Tony (theatre).

There have only been 15 EGOT winners, including John Gielgud, Mel Brooks & Andrew Lloyd Webber.

It was a doozy.

For the 5th consecutive quarter, PLUS “Uplift” was the #1 best-selling cannabis product in California in dollars sold, according to data from BDS Analytics.

Having Legend on your team is major get.

He and his ungodly beautiful wife recently got into a fantastic spat with President Trump.

“Legend joins other cannabis brand reps including Jay-Z, who became a chief brand strategist behind the San Jose-based Caliva company in July,” continued the Hollywood Reporter, “Whoopi Goldberg and Post Malone have gone a step further by debuting their own cannabis products and companies. Chelsea Handler is also developing a line with NorCal Cannabis.”

In the cannabis space, we’ve seen more than a few bone-headed celebrity endorsements.

You won’t find archived photos of Legend hawking on a bong in a Chicago dorm room.

Thirteen years ago, Rolling Stone Magazine asked Legend, “Do you ever enjoy smoking the weed?” and he replied, “Occasionally. I’m not like an avid smoker. Never in the studio, or singing, or anything like that. It takes me a little past drunk.”

Plus Products and John Legend both have a track record of making smart business moves.

Instead of trying to get Legend to endorse products he doesn’t connect with, Legend will be focusing exclusively non-psychoactive hemp-derived CBD products.

“The company behind the #1 & #2 best-selling THC edibles in California today announced the nationwide launch of its first-ever 100% hemp CBD product line,” stated Plus Products, “American superstar and philanthropist John Legend, who will advocate on behalf of the Company’s new nationwide hemp CBD product offering.

“I have been a believer in the benefits of CBD for some time,” stated Legend. “I was drawn to the PLUS team because they’re an innovative, family-run company, and they use science to deliver a consistent, high-quality product. I appreciate that they’re committed to setting a high standard within an industry that has to date been fairly unregulated.”

Territorially, the new CBD line is a game-changer: 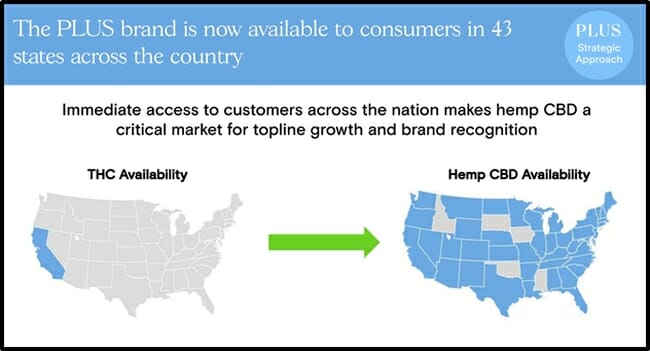 “We established our reputation in edibles by offering customers a consistent and precisely-dosed gummy using high-quality extracts,” stated Jake Heimark, CEO and co-founder of PLUS. “Our CBD line will build off that expertise.”

PLUS is also partnering with global sleep company Casper Sleep, to introduce its melatonin – and CBD-infused SLEEP product. Casper is the award-winning sleep company on a mission to bring better sleep to more people around the world.

“We’re always exploring new ways to improve sleep across the entire sleep arc — from sunset to sunrise,” said Neil Parikh, co-founder and chief strategy officer at Casper. “Introducing CBD sleep gummies brings a new way to relax and rest to those who need it.” 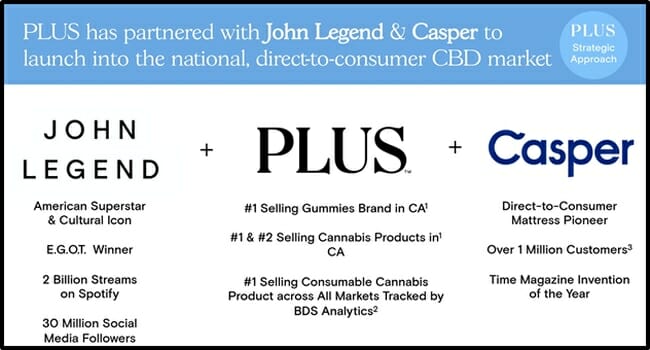 “The PLUS CBD line allows us to expand from California to nearly all fifty states overnight,” sated Heimark, “We are thrilled that John Legend and Casper have partnered with our team to support this exciting new initiative.”

The new CBD line will include three distinct products, developed by PLUS’s team of scientists, entrepreneurs and chefs:

All three products are available for purchase through the Company’s newly launched e-commerce platform at www.plusproducts.com.

But those shares have a 4-month hold.  I called Plus.  On or off the record, they don’t know the reason. It’s likely a generic “sell-on-news” event.  If so, that’s a buying opportunity for retail investors like me.

“Artists in general never stay in the same place,” stated John Legend, “We keep growing. It’s still you: you still have that core that you always had, but you work with new people and hear new things.”

Full Disclosure: Plus Products is an Equity Guru marketing client.