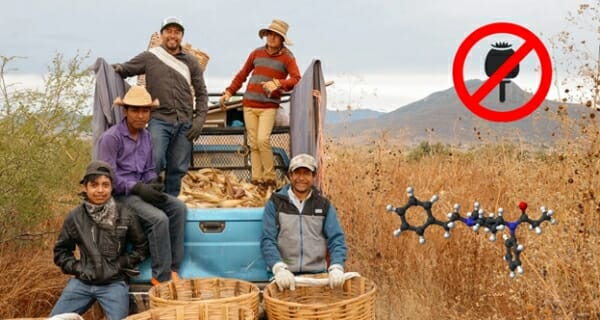 I have never tried opium.  But I suspect I would like it.

Derived from the milky sap of the poppy, the Greek poet Homer (800 BC) referred to it as “a drug to quiet all pain and strife”.

Opium provides such a delicious euphoric high, that it spawned a recreational market for synthetic opioids, including fentanyl – which is 50 times stronger than heroin (a few grains can cause death).

“More than 70,000 Americans died from drug overdoses last year, and a growing number of those deaths are attributed to the powerful synthetic opioid fentanyl, much of which comes from China.”

Recently, China’s President Xi promised to stop the flow of fentanyl to the west – but he hasn’t – and it’s not 100% clear that he can (there is a galaxy of mom-&-pop chemical factories wedged deep in the Yunnan mountains).

In the 19th Century, Queen Victoria decreed that the UK would smuggle opium out of British-colonized India to China – and pay for tea with black market opium.

China already had lot of opium addicts. Many of them suffered from Narcotic Bowel Syndrome. 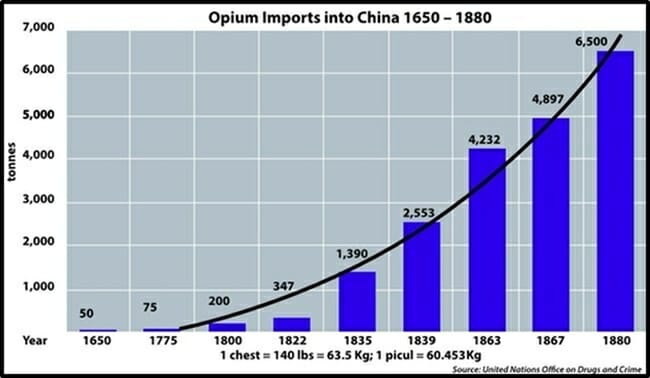 The economics of fentanyl production are attractive.

One kilogram of fentanyl costs $32,000, which can be used to make one million pills with a street value of more than $20 million.

In January, 2019, U.S. border agents seized 254 pounds of fentanyl hidden in a truck carrying cucumbers into Nogales, Ariz from Mexico.

The flood of synthetic opioids damaged the demand for pure opium in Mexico.

Now Mexican many opium growers have torn up their poppy fields and have gone back to growing corn.  Others have converted to the chemical drug trade.

“You earn a lot more cooking fentanyl than farming,” one Mexican ex-poppy grower declared. “It is less work and less investment and more profit.”

Mexico’s army recently seized 24 tons of fentanyl at a commercial port in southwest Michoacán state.  The fentanyl was hidden on a Danish vessel that had sailed directly from China. 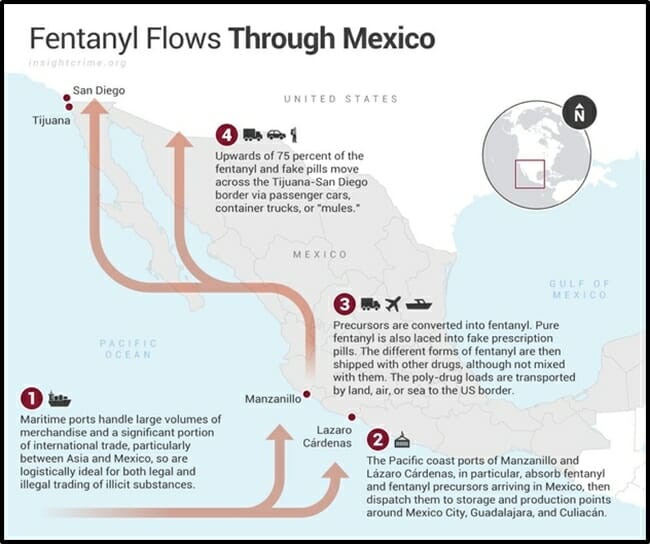 Two years ago, a tsunami of data concluded that marijuana is effective in weaning patients off opioids, and diverting them from the deadly drug in the first place. From the headlines:

“Our country has been flooded with an over-prescription of opioids medications,” confirmed Jacob Miguel Vigil, co-author of “The Effectiveness of Self-Directed Medical Cannabis Treatment for Pain, “This man-made disaster is killing our families and friends.”

In the last 12 months, numerous research studies have pushed back against the claim that THC is an effective treatment for opioid addiction.

Whatever your political or therapeutic stripe, most reasonable people agree that cannabis is a relatively benign drug.

In the mainstream press, the medical marijuana market is often eclipsed by its fun-loving sexy cousin, the “adult-use market”.

But make no mistake, the medical marijuana market is monster, expected to generate about $40 billion globally by the end of 2024, according to Zion Market Research.

At Equity Guru, we represent numerous cannabis companies who have invested shareholders’ dollars on the future of the THC/CBD “health and wellness market”.

“Mexico has a population roughly five times that of Canada, its climate allows for outdoor growing all-season and its labour force costs pennies on the dollar compared to Canadian workers,” wrote Reyes..

Last week, Reyes reported that Khiron has been backed by the Colombian Association of Gerontology and Geriatrics (CAGG), bolstering the company’s reach with the key demographic of Latin American seniors.

“The endorsement gives Khiron further integration into another specialized field of medicine,” stated Reyes, “giving them access to specialists in such fields as orthopedics and internal medicine. 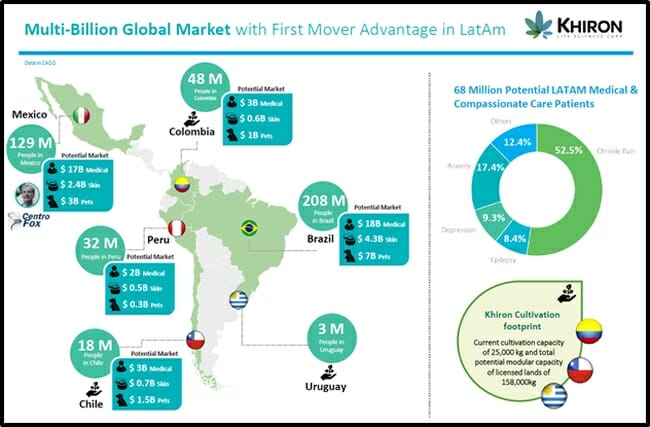 “Oh! Heavens!” declared De Quincey, “What an upheaving, from its lowest depths, of the inner spirit! What an apocalypse of the world within me!”

But fentanyl users aren’t getting much joy.

Two years ago, I lost a 19-year-old family friend to an over-dose.

I believe he was a “weekend-cowboy”.

“I am writing to express my deepest sorrow at your son’s death,” I informed his parents from Beijing, “I have cried more for your son than for the death of my own mother – who I adored. She was ready to go. Your son was not.  A luminous boy. The world is dimmed without him.”

Young companies like Khiron are positioning themselves to be part of the solution to this soul-crushing epidemic.

It’s also a shitty time to be a Mexican poppy farmer.