Jim Cramer likes Cronos (CRON.C) more than Canopy Growth (WEED.T), but should you?

Although the long-time TV personality has been known for controversial statements–see his comments on Bear Sterns stock before the 2008 financial crisis–it’s a notable tack in the opposite direction: Cramer has been bullish on Canopy for years.

So what’s changed? Honestly, Canopy isn’t in much worse shape this quarter than it was the last time ’round.

That isn’t to say equity.guru is on team Canopy, our teardowns of cannabis’ curve-setter are as plentiful as they are mean-spirited, but…why Cronos?

Cramer once described himself as a “banking-class hero.” Coincidentally, the same could be said for his new favourite weedco and notable Bay Street darling, Cronos Group.

in June, a Bank of America analyst gave Cronos a “double-upgrade,” taking the company’s stock from a “underperform” rating to “buy.”

TD Bank, BMO and CIBC have all had their hands in Cronos financings. The company can do no wrong in the eyes of the banking cartels: Cronos is trading at hundreds of times sales, but nobody seems particularly worried.

The company’s cash position has also drastically increased since the end of 2018, with over $1.5B in cash assets reported at the end of the quarter.

But Cronos has burned through share capital at a drastic rate: the company added $633M to its accumulated deficit during the quarter.

Thankfully, intangible assets/goodwill is virtually at a standstill. In total, the company has $2.6B in total assets. Not too shabby.

The company’s liabilities, however, are also up. As of Q2 2019, Cronos has $1.44B in total liabilities, including $1.33B in derivative liabilities.

Speaking of, the company lists a gain on revaluation of derivative liabilities totaling $263M. The company’s net loss, $250M, is therefore deceiving: it’s complex accounting theorem, but we believe revaluing the derivative buoys Cronos’ losses, even though no additional income was received.

In total, operating expenses have increased five-fold since Q4 2018 whereas revenues have only tripled. Granted, subsidiaries and JVs are still chasing licenses.

Cronos is a full-fledged international cannabis company which has interests in Canada, Israel, Australia and Colombia.

Peace Naturals, a Canada-based subsidiary, completed its first harvest in June 2018 and is fully operational.

Cronos Grow Co, another segment of the company’s Canadian grow arm, has a facility currently under construction.

The same can be said for the rest of the company’s international interests. In Colombia, the company is still awaiting licensing to grow psychoactive cannabis, though it can grow non-psychoactive flower for use in topical creams.

In Israel, the company has licenses to grow but nothing else. Despite a release in September 2017 saying titled “Cronos Establishes International Low Cost Production in Israel” which stated that “the Israeli Health Ministry’s medical cannabis agency (the “Yakar”) granted Gan Shmuel four codes to establish four distinct commercial operations,” nothing is being grown.

The Australian facility is under construction as well. In February 2018, Cronos Australia was announced after receiving a medicinal cannabis cultivation and research license. That’s all there is to report.

Cronos also has a joint venture with MedMen (MMEN.C) and equal stake in MedMen Canada. This JV is still chasing licenses.

The company also has a R&D partnership with Ginkgo Bioworks to “develop scalable and consistent production of a wide range of cannabinoids.” This partnership will see Cronos issue nearly 15 million more shares and award USD$22M to Ginkgo if certain milestones are met.

Cronos is that guy in high school who was never quote part of the popular-kid stratosphere, but benefitted from his proximity to them. Neither a jock, nor ultra-rich, Cronos has always been popular-adjacent due to its relationship with the upper crust, meaning banks.

Nothing in these financial statements is eye-popping, but nothing here can really justify the company’s valuation either.

Also, Peace Naturals has a number of claims against it:

Why Cronos?  By now we hope you know the answer. Who do we like instead?

Village Farms (VFF.C) is my favourite cannabis company around. Period. And it should be yours too.

No here’s why: The company’s stock has held steady despite the entire cannabis bubble bursting.

Canopy Growth posted a decline in net revenue and a $1.28-billion net loss for its most recent quarter. Canopy shares tumbled 14 per cent to $36.41 and took the rest of the sector down as well. It meant little to the market that Aphria, Village Farms International, Medipharm Labs and Organigram Holdings had each posted positive adjusted earnings before interest, taxes, depreciation and amortization.

Pure Sunfarms did roughly $27M in revenue minus cost of sales for Q2, a number which has doubled since Q1.

G&A is also 14% of revenue, a rare sight in the smallcap space, a paltry figure when considering Cronos’ G&A lines is actually bigger than their revenue for the quarter.

Or maybe we love VFF because of its big, beautiful chart: 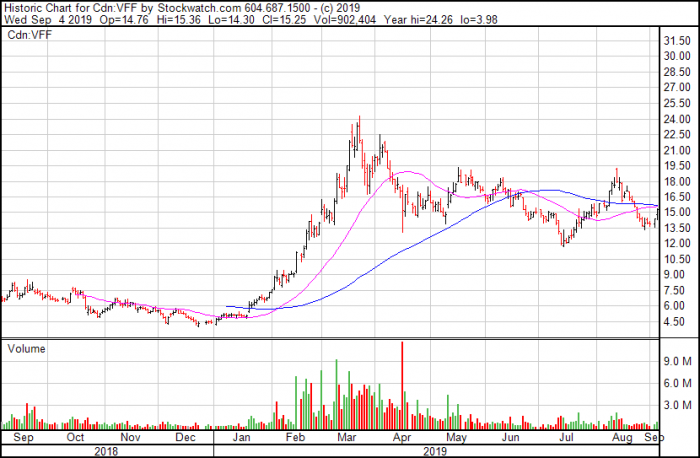 The Horizons Marijuana ETF (HMMJ.C) is down 38% since its high in mid-March. Cronos is down 51% since its year-high in early March.

What about the home team? ‘Did they do it, pops?’ Village farms is down only 34%, slightly beating the index and Cronos by a mile. We think Cramer would agree with our prognosis.