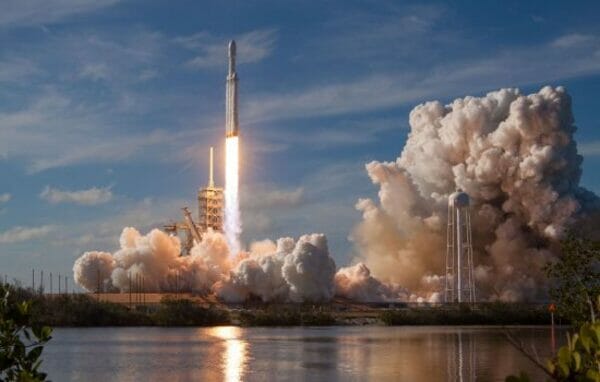 Rare Earth Elements (REEs) exploration companies may not have the glitter of a sexy high-grade Au success story—not on the surface anyway—but Defense Metals (DEFN.V) might have the rocks to turn more than a few heads in this junior exploration arena.

For the uninitiated, REEs are a group of 17 elements (atomic numbers 57-71) that exhibit a range of unique electronic, optical and magnetic properties. Their applications are broad-based and oh so very far-reaching in this modern age. Though they’re not dispensed in great quantities, they are an essential ingredient in the production of everything from night vision camera lenses to control rods in nuclear reactors.

REEs are sometimes referred to as the “vitamins of chemistry”. 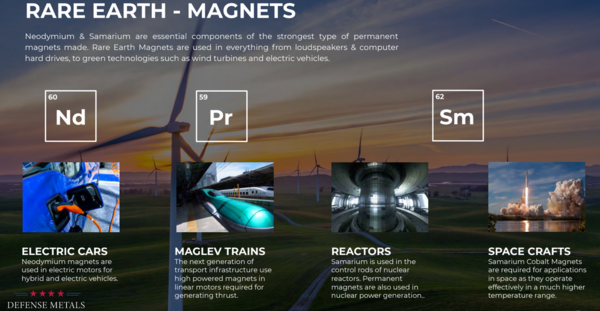 With that in mind, as the electro-mobility supercycle kicks into a whole new gear, REE demand is set to go parabolic.

But there’s a big fat problem, particularly for those of us in the West: China controls approximately 85% of the worlds REE supply.

And in case you haven’t noticed, Trump and Xi Jinping rarely hold hands or take windy walks together.

The two are in the midst of a trade war that is as destabilizing as it is ludicrous.

Exacerbating the situation, the US has only one producing REE mine—the Mountain Pass mine in California operated by MP Materials. And get this: MP sends its ore across the pond to China for processing—that’s just the way the system was setup years back. It’s the way it works (MP says it will begin its own processing operation by the end of 2020 and will produce approx 5,000 tonnes of Neodymium (Nd) and Praseodymium (Pr) annually). Nice, but not enough.

Dissension between the two superpowers has pushed REE prices significantly higher in recent months—note the recent price spike in Neodymium…. 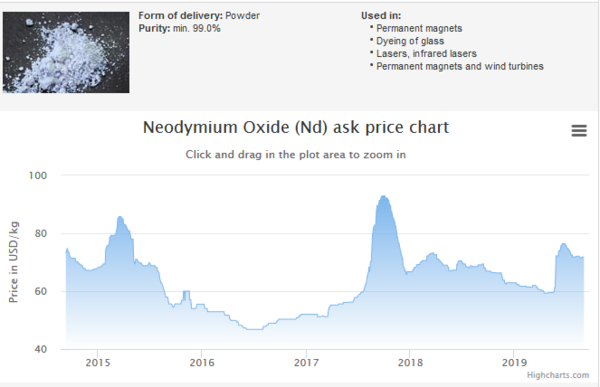 China wields a formidable upper hand here. In retaliation for higher tarrifs slapped on Chinese goods, they could raise prices on REEs exported to the US at the drop of a hat.

To say the US desperately needs a new domestic source of REEs would be lowballing the seriousness of the predicament.

A couple decades back, as a young highballing treeplanter, I likely planted tens of thousands of conifers all around Defence’s 1,708-hectare Wicheeda project in mining-friendly British Columbia, if not right on top of it. 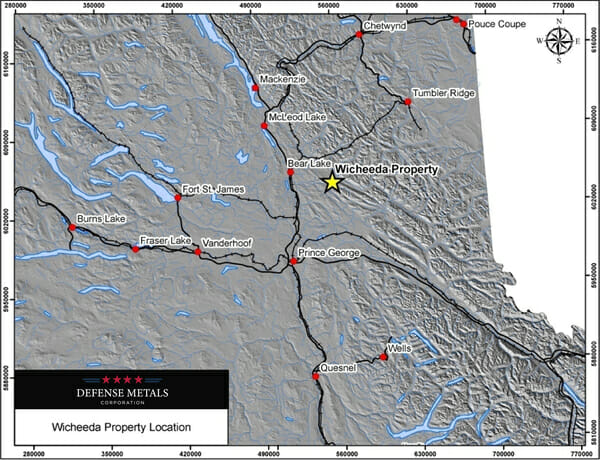 Wicheeda is at an advanced stage of development and is a significant deposit of Light Rare Earth Elements (LREEs), namely Cerium, Lanthanum, Neodymium, Praseodymium, and Samarium.

Location is everything when you’re developing a mineral asset. Aside from being strategically positioned along a major forestry service road off Highway 97, Wicheeda boasts close proximity to a hydroelectric power line, a major gas pipeline, and the Canadian National Railway at the nearby village of Bear Lake. Up until February of last year, we could’ve added the Windy Point Inn (and the internationally recognized ‘Wimpy Burger’) to the list. Unfortunately, fire struck and that long-standing hub of backwoods culture and cuisine are no longer.

Wicheeda has an Inferred Mineral Resource of some 11,370,000 tonnes averaging 1.96% LREE at a cut-off grade of 1.0% (sum of cerium, lanthanum, neodymium and samarium percentages).

Back in March of this year, the company tabled results from a 30-tonne bulk sample.

Not too shabby y’all. 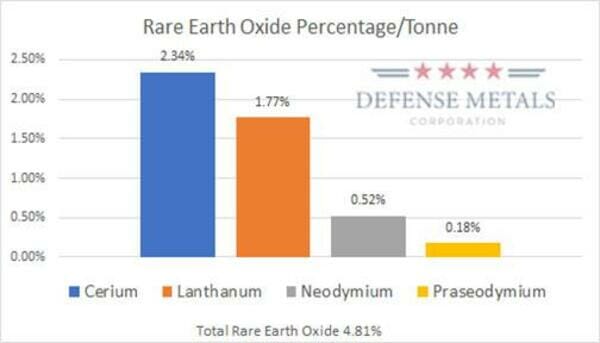 Neodymium (Nd) and Praseodymium (Pr) are used in the making of high-power Neodymium-iron-boron magnets. These magnets are an essential technology in the Clean Energy, Consumer Electronics, Electric Vehicle, and Defence sectors. The current market for these magnets is estimated at a whopping $11.3 billion. And that number is set to climb.

You might be thinking, “Yo Dirk, the Nd and Pr values expressed in the above chart are less than 1%… WTF and why all the fuss?”

Yes, they grades may appear modest, but check out what they’re fetching on the market—both metals are trading in the vicinity of $70,000 per tonne. Those seemingly modest grades suddenly become extraordinary when simple arithmetic is applied.

Strategic metals prices. Warning: the spread between bid and ask is often wide enough to drive a semi through

REE exploration and development is all about metallurgy. In other words, it’s all about extraction rates.

While additional test work is required to replicate the F21 test results, based on publicly-available research authored by SGS staff and Defense Metals’ discussions with experts in the REE industry, the flotation response of the Wicheeda material is considered among the best in its class with relatively high upgrading ratios in comparison with other REE projects.

The company also sees the potential to reduce acid consumption during the hydrometallurgical extraction stage. Acid consumption is a HUGE cost driver for deposits of this type. Reduced acid consumption could dramatically impact the projects overall economics via reduced operating and/or capital costs.

“We are extremely pleased with the Wicheeda batch flotation test results to date. With 80% recoveries at a rare earth oxide concentrate grade of 44%, this places our Wicheeda bulk sample metallurgical testing at the high-end of publicly reported concentrate grades and upgrading ratios for alkaline and carbonatite rock REE deposits. Defense Metals looks forward to the completion of additional batch flotation tests and locked cycle flotation testing to establish a finalized process flowsheet”.

I’d be remiss in not pointing out that just prior to this positive metallurgical report, the company closed an over-subscribed private placement consisting of 2,662,500 flow-through common shares at a price of $0.20 per share for gross proceeds of $532,500.

Then, on Aug 12, the company announced the mobilization of a drill rig to Wicheeda for a 2,000 meter drilling campaign. 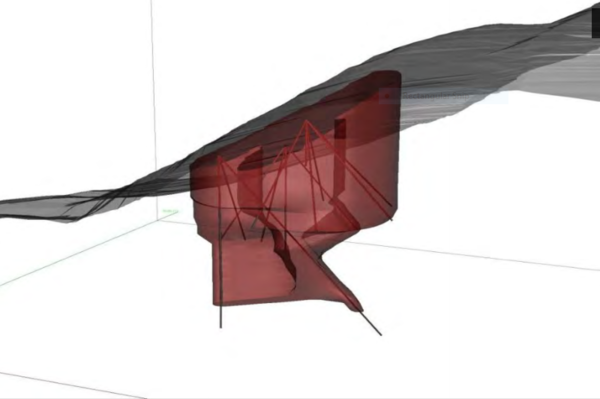 There’s a good chance that this stepout drilling will add significant tonnage to the current resource.

For those looking to firm their resolve, that Wicheeda may be the real REE deal, this will be music to the ears:

The company went on to state:

Defense Metals continues to advance its geologic understanding of the Wicheeda Deposit. A detailed review of historical and current drill core indicates the presence of multiple phases of REE mineralized dolomite-carbonatite; one of which contains a visually higher percentage of REE-bearing minerals. Subject to completion of the remaining drilling and receipt of final assays results, Defense Metals will evaluate the impact of these previously unrecognized REE mineralized domains and their potential positive contribution to the Wicheeda Deposit mineral resource estimate.

Well have to wait n see, but some decent REE assays could emerge from Wicheeda in the coming days/weeks.

“We have intersected REE mineralization within every drill hole of the current drill program. Our 2019 resource definition drilling will allow for an updated and enhanced geological model that Defense Metals believes will substantially increase our confidence in the contained REE mineral resources of the Wicheeda Rare Earth Deposit.”

Speaking of management, their resumes can be perused here (note the recent newsworthy addition of Alex Knox to the team).

The company currently has a market cap of $3.92M based on its 30.18 million shares outstanding and $0.13 share price. With roughly $1M in the bank and a critical REE resource that is being advanced aggressively along the development curve, Defense looks cheap at this valuation.

Postscript: Later this fall, the company will be examining the possibilty of setting up a pilot plant to better realize the economic potential of Wicheeda.