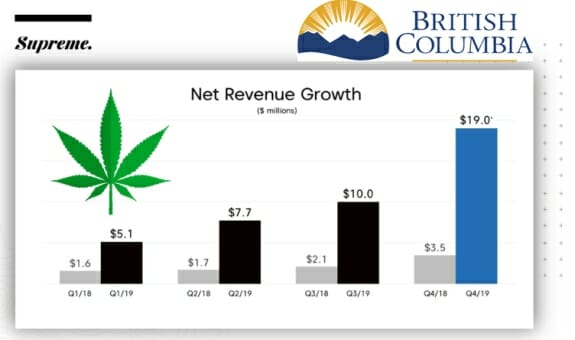 “British Columbia has long been considered the cannabis capital of Canada,” states Global News, “but new numbers from Statistics Canada show that reputation is in jeopardy”.

“In the approximately nine months since cannabis has been legal in the country, B.C. has seen just $19.5 million in recreational pot sales.

Compare that to neighbouring Alberta, where legal pot has racked up more than $123 million in sales since last October.”

BC has been plagued by a lack of government-sanctioned outlets. When legal cannabis sales started in Canada, astonishingly, there was just one legal store open in BC, a government-run outlet in Kamloops.

The City of Vancouver claims that the number of illegal and grey market outlets has been reduced to five. 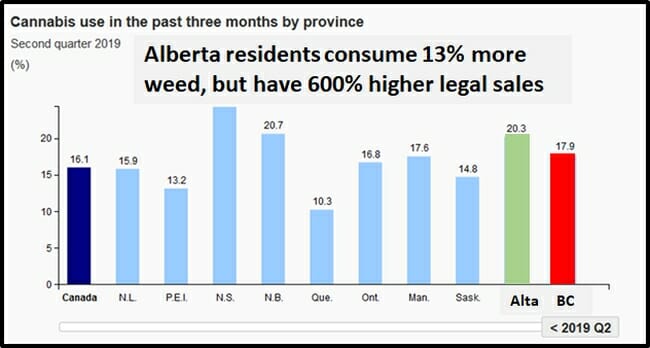 “Part of the challenge is ensuring that the legal cannabis market in B.C. doesn’t have links to organized crime,’ stated Public Safety Minister Mike Farnworth “We are processing applications as fast as we can, we’ve looked at ways to improve the process.”

“The B.C. Liquor Distribution Branch (LDB) said problems with supply and slower than anticipated provincial and municipal approvals resulted in the province’s cannabis industry evolving at a slower rate,” reported The Vancouver Sun.

Cannabis arrests – as a percentage of total drug arrests – have been falling for the last seven years. 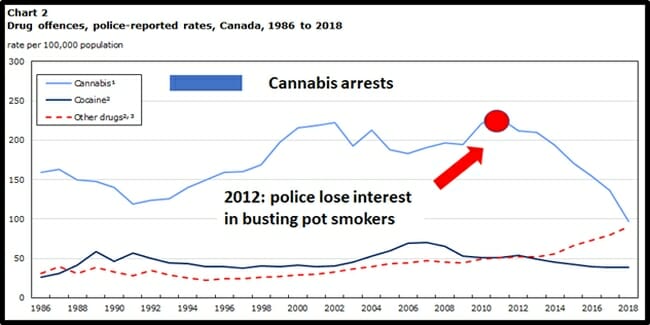 BC’s convicted drug criminals (like me) have no fuzzy feelings towards the Canadian government’s involvement in the cannabis industry.

In this podcast, Equity Guru’s Guy Bennett talks to Jerry – a long time Canadian cannabis user who explains why he is reluctant to abandon the black market (it isn’t about price).

THE SOLUTION: BE BETTER THAN THE GUYS ON THE STREET

While former Supreme Cannabis President and CEO John Fowler has long been an advocate for activists, pioneers, and small players on the cannabis scene to be brought into the legal space, he acknowledges there will always be folks working around the system.

“We’re always going to have a black market,” predicted Fowler in a November 2017 Midas Newsletter interview, “I think we need to accept that as being true.”

And if that’s always going to be the case, the legal market players have to find a way to attract folks from what they’re used to.

[contextly_sidebar id=”Pjx2XfxkMVl1RJncLCt8j3k6FZErj9Of”]“It’s important that we find a niche for ourselves,” continued Fowler, “and we’ve identified the higher-end premium market using our unique sun-grown cannabis that I don’t think exists currently in the legal space.”

“But I also don’t think it exists in the illicit space, either. And by having that market, we’re confident that we can find consumers for the 50 million grams a year we plan to be producing in 2020″.

That’s its religion. Its hobby. And the reason it exists.

7ACRES’ 340,000-square foot hybrid greenhouse is situated in Kincardine, Ontario, combines the best practices in indoor cannabis cultivation with the power of the sun. The result is indoor-quality buds with sun-grown characteristics. 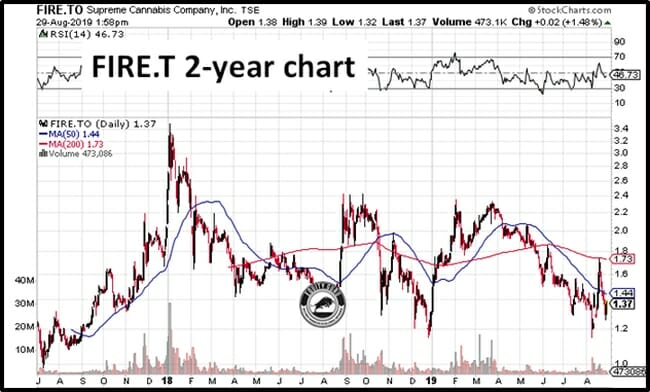 In 2019, Supreme Cannabis added to its portfolio of brands and operating assets.

Statistics Canada estimates about 65% of cannabis is purchased illegally.

“There are enough consumers who are willing to pay the roughly 40% extra for the legal cannabis,” Michael Armstrong, a biz prof at Brock University told the Vancouver Sun.

“On an average $10-a-gram product, a $1 excise tax is a big chunk,” confirmed Armstrong, “and if you want to compete with black-market prices that are $5 or $6 a gram, it’s very difficult for the legal industry.”

“Supreme has quality on lock,” stated Chris Parry on July 17, 2019, “and that is starting to really matter. Especially in a market that is only allowed to grow through word of mouth.” 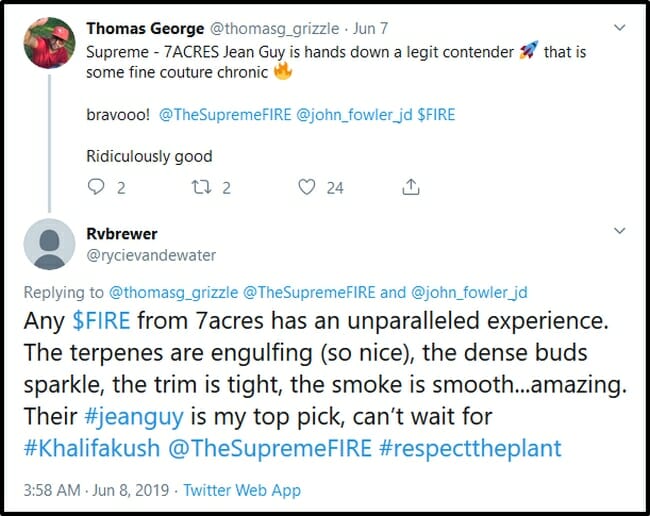 “If we go back as far as that 2016 period where the company raised some $60 million in quick time, today, with the share price at the same level – they have $70 million in the bank,” added Parry.

“This is a company that could easily have gone after the shiny things and played the market cap game, but they went the other way, choosing only to buy things that were best of class, plugged in well to their long-term vision.”

Ultimately, Canada’s legal cannabis industry will need to compete with the black market on price.

But right now, rather than squeezing margins, the better strategy may be to grow flower that is differentiated by quality and can’t be found anywhere else.