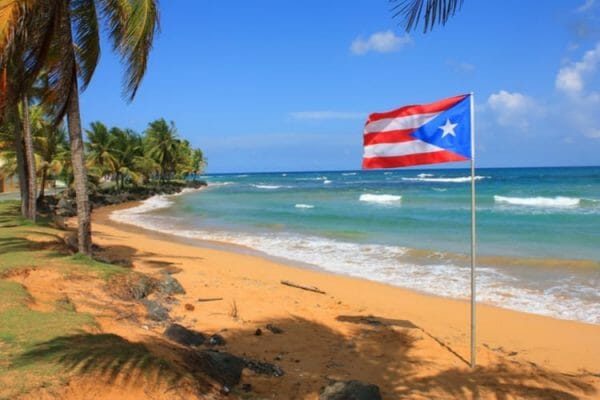 Medical cannabis is legal in Puerto Rico, but recreational use cannabis is still illegal. You can’t buy it in stores and pubs like you can in Amsterdam, and there’s the whole process of getting a doctor to sign off on your “need” for cannabis.

The official site for weed in Puerto Rico states:

The first criteria patients must meet to apply for a medical marijuana card in Puerto Rico is having a qualified medical condition. The state has included several disorders and symptoms including cancer, Parkinson’s disease and ALS, among others. The required steps are similar to those in many U.S. states:

It looks like doctors are turning away people all the time, but if it’s anything like Canada was prior to legalization then they probably aren’t. Even in Canada, you could go in and say your eyes hurt and you need weed, and they would charge you $10 for their time. If that doctor wouldn’t do it then go find one that would. It’s probably the same in Puerto Rico.

That’s why it makes sense for Chemesis to lock down GSRX, because it adds to their holdings and gives the company another avenue to make, distribute and sell their products through their dispensaries.

“With the completion of this acquisition, Chemesis adds to its asset investment portfolio, and also gains further access to decades of management experience in retail, operations and manufacturing. This combination of asset investments and talent will allow Chemesis to realize efficiencies throughout its processes, and is expected to increase operating margins throughout the company’s supply chain,” said Edgar Montero.

GSRX has also recently submitted a business plan to the City of Riverbank, California, aiming to start a retail location there. They also signed a long-term lease with a landlord for 2,600 square feet of building space, which they hope to use to build a strong customer base for both medical and recreational use products.

Technically, Puerto-Rico’s regulations ban anyone who isn’t a terminal patient or received permission from a state-designated committee. It isn’t the THC, but instead the risks associated with lung cancer. Therefore, any other method of ingestion from transdermal patches to vaping were perfectly allowable. So CSI partnered with Rapid Dose Therapeutics (DOSE.C) to manufacture the Quick Strip.

Here’s what we wrote about Quickstrips:

You pop it under your tongue and it dissolves in seconds, like breath-strips. The company equates onset time to be close-to taking the chemical intravenously, and they’re conducting controlled trials to demonstrate QuickStrip’s effectiveness and consistency.

If this were California, nobody would care. It would be an easily dismissed, carbon-copy of other products on the market, but Puerto-Rico, with its tighter regulations, is a different story altogether.